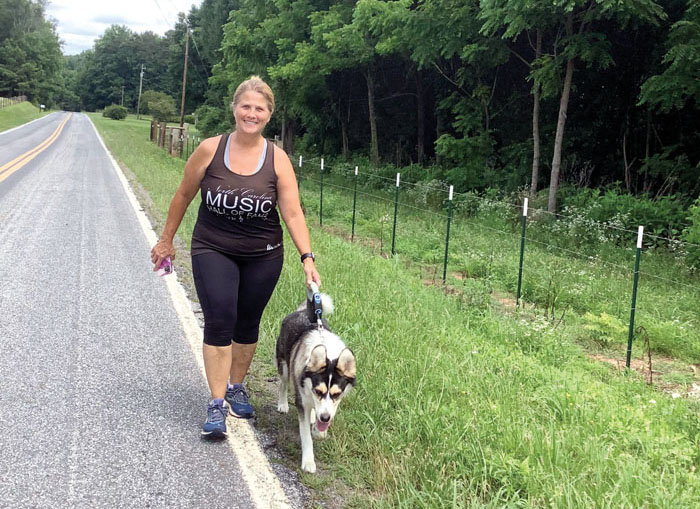 Shelia Gillespie and her dog Renegade on their daily run/walk. Photo by David Freeze

Over the years, I’ve written about all types of runners, representing all speeds and all ages. Shelia Gillespie and her husband John are my nearest neighbors below the farm. Still about a third of a mile away, I see her almost every day. Shelia has one of the best local running/walking streaks going right now.

From West Virginia, they moved to N.C. in August 1986 due to lack of work. Shelia said, “I moved to Iredell County and then after quite a few years we were ready to leave Mooresville to find a place in the country. I grew up off a mile long dirt road in Lincoln County, W.V. In November 2001, we did move to Rowan County with cows as my nearest neighbor. Not the case anymore, but I do like being where the houses are not right on top of each other. Everyone around me lives on at least an acre of land and strives to help one another.”

Shelia started walking/running in 2014 and then Daetwyler, the company she works for in Huntersville, started a wellness program that paid for any running/walking event of 5K, 10K, marathon or triathlon. She said, “The longest race I have done is a 10K with three of them now complete. Since the 10Ks always started in the morning, I twice did a 5K the same evening. My first race was in Charlotte with a group of our employees to support the Children’s Levine Hospital. Hooked by that time, I have also completed two Warrior Dash Mud Runs that are so much fun if you like dirt. I’d much rather do my running/walking outside with my dog by my side no matter how far I go, but when the weather does not permit, I am treadmill bound.”

With rheumatoid arthritis, Shelia must give herself two shots every other week. She also has amyloidosis of the bladder to which there is no cure but is manageable. When Shelia’s urologist got the diagnosis back, he had never heard of it. With research, he found that she was one of only 200 in the world to have it in the bladder, Shelia said, “I am not sure the running helps with amyloidosis but I know it does with the RA because just moving helps keep my joints more flexible. You know the old saying ‘a body in motion stays in motion.’”

Shelia was doing sometimes three 5Ks a month and Daetwyler human resources told her that she would be their poster child for the wellness program. With 50 races complete, her next race will be the Salisbury Greenway 5K on July 17 unless something else comes up that isn’t in Charlotte or a virtual race.

Shelia added, “I have become obsessed with my days in a row of walking or running. By Thursday, I had 388 days straight which is a feat in itself. When COVID hit and they sent me to work while sitting at home near the end of March 2020, I decided on June 2, 2020, that I needed to get up and get moving. At first, I was going to try for 30 days, and the goal just kept going up, recently passing a year. When I have to have a medical procedure done, I will get up early in the morning and get on the treadmill. Right now, my goal is 400 days, and I am getting closer I know there will come a time when the streak will end, but I am going to push as long as I can.”

John and Shelia have been married since January 1998. Shelia said, “He is not really into the health thing even though he has issues. If I race close to home or have one in Charlotte, he drives me because I don’t like the traffic. He then participates so he doesn’t have to sit all alone. John will occasionally go out and walk with me on the weekend. We will be doing the Salisbury Greenway Race on the July 17.”

I will bet that Shelia doesn’t stop at 400 days. Check out next Saturday’s Shiloh Missions 5K and the Greenway 5K at www.salisburyrowanrunners.org .