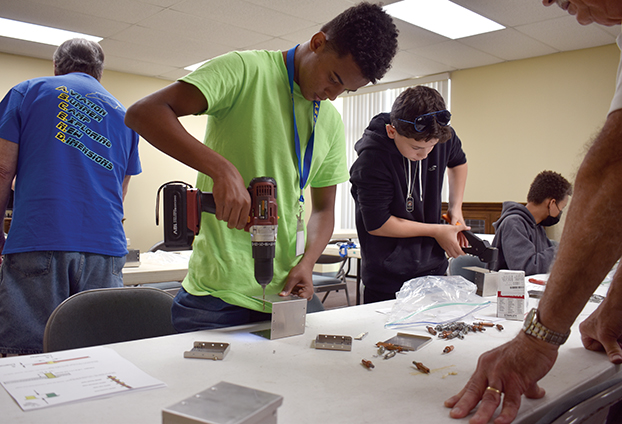 Adrien Madjitoloum and P.J. Tomkus work on crafting metal boxes during the ASCEND summer camp on Thursday. The skills the campers used to build the boxes are the same skills they'd need to construct a homebuilt aircraft. Ben Stansell/Salisbury Post

SALISBURY — From the first time she saw Luke Skywalker guiding a starship through space, Grace Molloy knew she wanted to be a pilot.

There were more influences besides the famed Jedi, of course, including real-life heroes such as Amelia Earhart and the Women Airforce Service Pilots who helped with the American war effort during World War II.

Although Molloy, 17, harbored dreams of being a pilot from a young age, the first time she truly experienced the sensation of flying outside of a few trips on commercial jets was about four years ago when she participated in the Aviation Summer Camp Exploring New Dimensions (ASCEND) summer camp.

The annual camp is hosted for a week in July at the Mid-Carolina Regional Airport by Chapter 1083 of the Experimental Aircraft Association. On the last day of camp, participants have the opportunity to fly in the right seat of a small plane. Molloy remembers the experience vividly.

“It was my first time in a smaller plane and being able to look out and see everything was so, so beautiful,” Molloy said. “Seeing everything awoke that passion I had for flying.”

Molloy is one of 14 students attending the 10th edition of ASCEND summer camp this week. Throughout the six-day program, which started on Monday and will finish on Saturday, students learn about the science behind flying and are taught how to identify and use instruments in a cockpit. They also hear from professional pilots, receive an in-depth tour of the Mid-Carolina Regional Airport and learn hands-on skills used by aviation mechanics.

“The camp is to give kids 12 to 18 an overview of aviation to spark an interest in them about something they might not know about otherwise,” said Jana Brown, one of the camp’s organizers.

Molloy said she decided to participate in the summer camp for a second time to brush up on her aeronautics knowledge. In the fall, she’ll attend Charleston Southern University and plans on enrolling in the school’s aviation program with intentions of becoming a pilot. 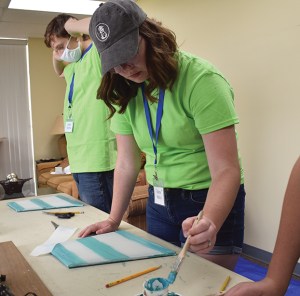 Grace Molloy paints non-toxic, heat activated glue onto a piece of fabric, mimicking the process by which the wings of some small airplanes are wrapped. Ben Stansell/Salisbury Post

Molloy credits attending the ASCEND camp with reaffirming her interest in aviation, and she’s not the only one. The program has led several former students into careers in the air.

“I would say over a 10-year period, at least two from every group have gone on to do something in aviation,” Brown said.

Two of those such students are Stephen Johnson, 18, and Jacob Powell, 20, who are both helping out as staff members during this year’s camp.

Johnson and Powell both participated in ASCEND in 2016 and have since continued to work toward their dream of becoming pilots. Johnson has earned his private pilot license, his instrument rating and is working on logging the 1,500 hours of flight time required to get his airline transport pilot license, which would allow him to fly commercially. He’s got about 400 hours under his belt already.

Powell also earned his private license and is working toward his instrument rating. Like Molloy, he attributes his sustained interest in aeronautics to his first flight during the ASCEND camp.

“I liked airplanes forever, but I really knew I wanted to do it when I took the flight,” Powell said.

Adrien Madjitoloum, an ASCEND camper, is looking forward to getting up in the air on Saturday. It won’t be his first time in a small aircraft. While living in Tanzania, where his family currently resides, Madjitoloum, 14, experienced his first small plane flight at the age of nine.

“I was a copilot flying from Dar es Salaam to Zanzibar,” Madjitoloum said. “It was like a 15-minute trip. I did that about three times. It was a really amazing thing.”

Madjitoloum’s mother, a native of the Charlotte area, heard about the camp and immediately signed him up.

“She knew that I’ve wanted to become a pilot for a long time. So, this is a perfect opportunity for me to learn more about planes,” said Madjitoloum, whose family was already planning a visit to North Carolina.

Not only did Madjitoloum’s mother sign her son up to attend, but she also coordinated to have his friend Kian Metiku, who lives in Vermont, visit and attend the camp.

Metiku’s interest in aviation started in kindergarten, when the now-13-year-old drew stick-figure pictures of himself piloting a plane. Unlike Madjitoloum, Saturday will be a completely new experience for Metiku.

“I’m not scared of planes,” Metiku said. “I find them really exciting.”

Watching students learn the ins and outs of aviation during the ASCEND camp is a special feeling for Brown. It’s even more exciting to catch up with students years later who have pursued a career in flight.

“It is very rewarding because it just makes us feel like we’re actually making a difference,” Brown said. “We’re giving them something they wouldn’t normally get. This isn’t something they ordinarily get in high school.”

The flight on Saturday is part of an EEA program called Young Eagles, which was launched in 1992 to give interested young people an opportunity to go flying in a general aviation airplane. The flights are offered free of charge and are open to anyone ages 8-17 who wants to sign up, not just ASCEND campers. More than 2 million people have flown in the program. For more information about the flight, visit www.eaa.org