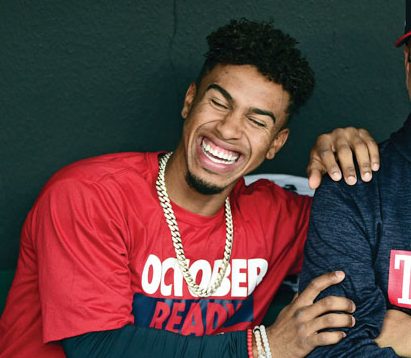 Francisco Lindor homered and drove in three runs for the Mets in the victory over the Braves. (AP File Photo/David Dermer)

Tylor Megill and Corey Oswalt came up from the minors to provide steady pitching for a New York staff ravaged by recent injuries, and the Mets bounced back from consecutive shutouts to split the four-game series.

Jeff McNeil had three hits, including an RBI single in the second inning. Lindor followed with his ninth homer of the season off Kyle Wright (0-1) to make it 5-0.

Edwin Díaz got five outs for his 16th save in 17 tries.

Called up from Triple-A Syracuse earlier in the day as the banged-up NL East leaders made eight roster moves, Oswalt (1-0) allowed one run over 2 1/3 innings in relief of Megill for his first major league win since 2018.

Megill also was summoned from Triple-A to start in place of Joey Lucchesi, who is scheduled for season-ending Tommy John surgery Thursday. The right-hander permitted two runs and three hits with four strikeouts over 4 1/3 valuable innings in his major league debut.

When he was lifted, Megill got a pat on the chest from Lindor and a warm, boisterous ovation from fans. Then he was checked by umpires for sticky stuff on his way off the field to a chorus of boos from the crowd of 15,645.

Ender Inciarte hit a two-run homer off Megill in the fifth.

Conforto went 2 for 4 with a walk and scored twice. He lined a double in the first to key a two-run inning that included Dominic Smith’s RBI groundout.

The right fielder had been sidelined since straining his right hamstring on May 16. He was ready to return Tuesday, but wasn’t activated after Syracuse’s game was postponed to allow for more COVID-19 testing and contact tracing within the organization. Conforto spent last weekend on a rehab assignment with Syracuse, so the Mets said they decided not to reinstate him Tuesday “out of an abundance of caution.”

“It was definitely a rollercoaster,” Conforto said, adding he tested negative three times.

Wright was tagged for five runs, four hits and three walks over two innings in a disappointing return from the minors. He was called up to start in place of injured Max Fried (blister).
Luis Guillorme doubled and reached on a perfect drag-bunt single for the Mets, scoring twice. James McCann had a double and an RBI single.

New York had dropped six of eight, totaling only 13 runs and getting shut out four times during that span.

Braves: RF Ronald Acuña Jr. was scratched from the lineup before batting practice because of a stiff lower back. He is day-to-day. … RHP Huascar Ynoa (broken right hand) is playing catch and long toss, manager Brian Snitker said. … Atlanta closer Will Smith was unavailable due to a heavy workload lately.

Mets: RHP Marcus Stroman is optimistic he can make his next scheduled start Monday night in Washington after an MRI showed no damage to his sore left hip. Stroman exited Tuesday night’s outing in the second inning. … Conforto had been sidelined since straining his right hamstring on May 16. … New York placed second-string catcher Tomás Nido on the 10-day injured list, retroactive to Tuesday, with a bruised right wrist. … 3B Jonathan Villar (calf) sat out for the second consecutive game. An MRI came back clean, manager Luis Rojas said, but Guillorme started at the hot corner again. … RHP Robert Gsellman (right lat strain) was transferred to the 60-day IL.

UP NEXT
Braves: Tonight at Cincinnati in the opener of a four-game series.

Mets: Following a much-needed day off, the Mets begin a four-game set Friday against NL East rival Philadelphia with a single-admission doubleheader at Citi Field to make up an April 15 rainout. David Peterson and Taijuan Walker are scheduled to start for New York. Aaron Nola and Matt Moore are expected to pitch for the Phillies in a pair of seven-inning games.