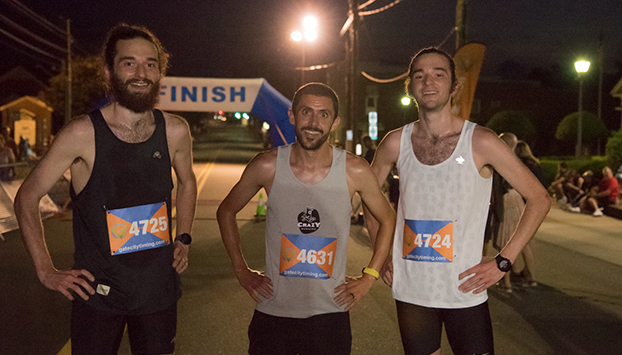 Originally started by Ricky and Edie Smith at Sidekick Karate, the race had its first running in 1998. The race has been managed by the J. Fred Corriher YMCA since 2000. The race course during the first few years used several neighborhoods and included some challenging hills. The current course is simple and fast, starting on Main Street just north of the fire department, proceeding to a turnaround at Kimball Road and Main Street and returning to a downtown finish at the fire department.

Runners and walkers of all abilities participated, including a 200-yard Tot Trot for toddlers and a half-mile fun run for slightly older kids. As is usually the case, some very fast runners chased the win and a possible course record bonus.

Just missing the course record of 14 minutes and 19 seconds was Donnie Cowart of Winston-Salem. His time was 14 minutes and 21.8 seconds, missing the bonus by less than 3 seconds. Next were brothers Matthew and Jonathan Martin of China Grove with second- and third-place times of 14:48 and 14:50, respectively.

“We always enjoy racing in Rowan County. It does feel like home,” said Matthew Martin. “We’ve ran under 15 minutes on the track multiple times, but this is the first time on the roads. This is something we’ve always wanted to do.”

The next race for the Martins will be the NC USATF 5K Championship at Beat the Heat on July 17 in Winston-Salem.

“This summer, we are focusing on shorter distances like the 5K. It’s a chance for us to have fun and improve on our speed,” said Matthew Martin. “We love running in China Grove. There’s something special about running a great race only a few miles from your childhood home. I wish that one of us could have taken the win, but that will have to wait for another year.”

Top female finishers were Gabriella DeLay of Winston-Salem at 18:14, followed by Rebecca Parker of Charlotte in 19:06 and Jasmine Smith of Waxhaw in 20:52.

Parker, a former Rowan County High School Runner of the Year and Georgia Southern standout, said it was her first time ever running in the China Grove Main Street Challenge.

“I have not done a nighttime race since my college days and was really excited for this race, having heard about it for years and how much fun it was,” Parker said. “I had to run it and see what the fuss was about. The energy at this race made up for the lack of daylight and the community that came out to support all the runners were awesome. There were random people and little kids cheering me on and telling me ‘good job’ after the race and it was such a great feeling. This is definitely a race I will be running again.”

Pete Gibson, 65, of Murfeesboro had a sizzling performance with a finish in 20:24. After running the race in 1998 and 1999, Gibson said he wanted to see what it had become.

“An electric atmosphere was created at the start as all of the Main Street course was shut down to traffic and lit up by all manner of streetlights and the strobes of fire, police and rescue vehicles. What a surreal sight” Gibson said. “After completing the fast, serpentine, out-and-back course, the runners were treated to food and the hospitality that has become a trademark of the YMCA, the Salisbury Rowan Runners and the town of China Grove.  Wonderful event.”

“The sponsors, participants and spectators make this event special every year,” Crowe said.

Complete results can be found at www.salisburyrowanrunners.org