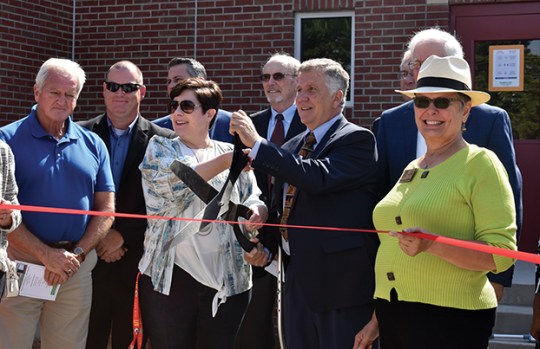 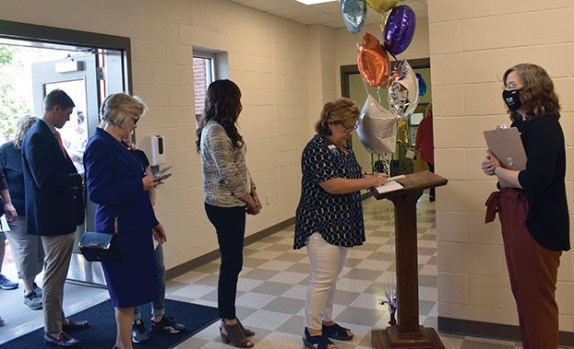 Visitors signed their names before walking into the West Branch for the first time. Ben Stansell/Salisbury Post 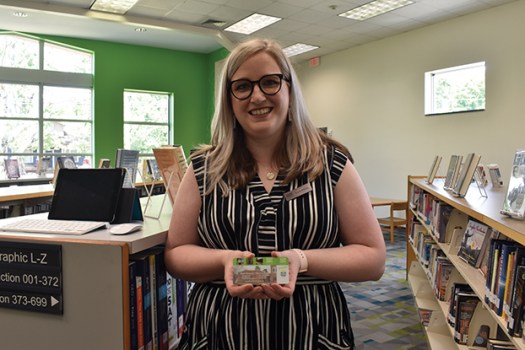 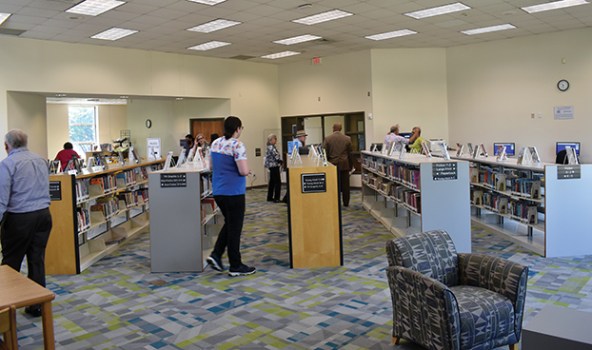 Guests on Tuesday were able to check out the book collection and techonological resources offered at the Rowan Public Library's West Branch. Ben Stansell/Salisbury Post

CLEVELAND — For the town of Cleveland and the Rowan Public Library, the grand opening of the system’s West Branch on Tuesday morning was the fulfillment of a long-awaited vision.

Hall, who retired as director in 2019 after more than three decades with the library, was a circulation services supervisor in the early 1990s when he started advocating for a new branch in the western part of Rowan County.

At the time, the library was shutting down its bookmobile, which served many in the Cleveland area. To fill the void, Hall and others started discussing the possibility of opening a new branch. But “politics and economics” intervened, Hall said, and the effort was put on hold for several decades.

Designs and hopes for the West Branch finally came to fruition Tuesday, when dignitaries, library staff and members of the public walked through the renovated rooms of the new library for the first time.

“We are here to celebrate the opening of a public library,” said Jennifer Hubbard, president of The Friends of Rowan Public Library. “Think about that. It’s more than a collection of books. It’s the soul of a community. It’s a portal. It’s a schoolhouse. It’s a refuge. It’s a garden. It’s a beginning.”

Prior to the first guests signing their names in the visitor’s log, a ceremonial ribbon cutting was held outside of the library’s front doors. Hall was given the honor of using oversized scissors to slice the red ribbon. He was assisted by Library Director Melissa Oleen, who Hall credits with pushing the project he helped start decades ago across the finish line.

“(Oleen) was dedicated,” Hall said. “She brought the project through a lot of obstacles, including COVID, delays related to COVID and things that came up in construction.”

After being paused for decades, the wheels started turning on the new branch when the Rowan County Board of Commissioners officially endorsed the project in spring of 2018 and included $800,000 in the county’s budget for the library’s construction. The remainder of the project was funded by the town of Cleveland (donated $100,000 to the project), the RPL Foundation (donated $200,000 through the Glenn and Ozell Freeman Endowment) and The Friends of RPL (donated $20,000), among others.

To build the branch, the county renovated and repurposed the media center and auditorium of the former Cleveland Elementary School campus. The main portion of new construction was the hallway with bathrooms that now connects the two buildings.

The media center has been transformed into the main library space, complete with books for adults and children, desktop computers, laptops, tables, chairs and reading areas.

The West Branch utilizes new technology not found in other branches, including a mobile catalog system that gives guests the ability to search for their favorite book titles on tablets anywhere in the library. The branch also has four Playaway tablets, which are pre-loaded with educational games for children.

The building’s renovated auditorium is suitable for hosting live performances and other entertainment and the former classrooms outside of the auditorium have been turned into meeting spaces.

“I would have never expected we’d build a meeting facility like this one,” Hall said. “This meeting facility is incredible. I expect businesses will use it for conferences, training. It will be a great place to do computer training for groups.”

Construction on the branch was completed last February, but the COVID-19 pandemic prevented Rowan Public Library from opening the facility to the public. It also caused major delays in orders for furniture and equipment, some of which still has not arrived. The branch will continue to add shelving, tables, chairs, and other equipment as it comes in throughout the summer. Oleen said they might host another grand opening event in the fall once the branch is fully equipped.

Perhaps the most important feature of the newly-opened branch, Hall said, is its free Wi-Fi.

“Broadband internet is very difficult to get (in Cleveland),” Hall said. “When it became essential to have for children in schools because of the use of laptops in instruction, we knew that children were having to go to Salisbury or other places like McDonald’s to get internet to do their homework.”

The West Branch’s Wi-Fi extends to the parking lot, Hall said, so people can take advantage of the internet outside of the library’s regular hours.

Michelle Timmerman attended the grand opening on Tuesday and picked up her commemorative library card. The new branch, Timmerman said, is more convenient than driving to the central branch in Salisbury. Timmerman already calculated that traveling to the West Branch cuts down on her driving time by six minutes.

The West Branch will be more convenient for many people like Timmerman who live in the western part of the county, Oleen said. Before, those people would have had to drive to downtown Salisbury or Statesville to get to their nearest library. There was a small library collection at Cleveland’s Town Hall, but it only included a fraction of the resources now offered at the West Branch.

The new branch will be overseen by librarian Lyndsey Maloney, who graduated with a master’s in library science from the University of North Carolina Greensboro in 2019. Maloney said she was thrilled to see the library filled with people on Tuesday.

“It makes me really happy to see kids run into the children’s section, to see adults run to see what they’ve got,” Maloney said. “I love seeing everybody in the community turn out because it really was a community project.”

Oleen said she is looking forward to seeing the West Branch become a fixture for people in Cleveland and surrounding communities.

“I hope it will be a library, but also a real community center,” Oleen said. “With the combination of meeting rooms and technology available, it can be a real gathering place for the community.”

The West Branch opened in time to host its first summer reading program. Maloney encourages interested families to sign up online at http://rowanpubliclibrary.readsquared.com/ or in person by visiting the new branch located at 201 School St. in Cleveland.