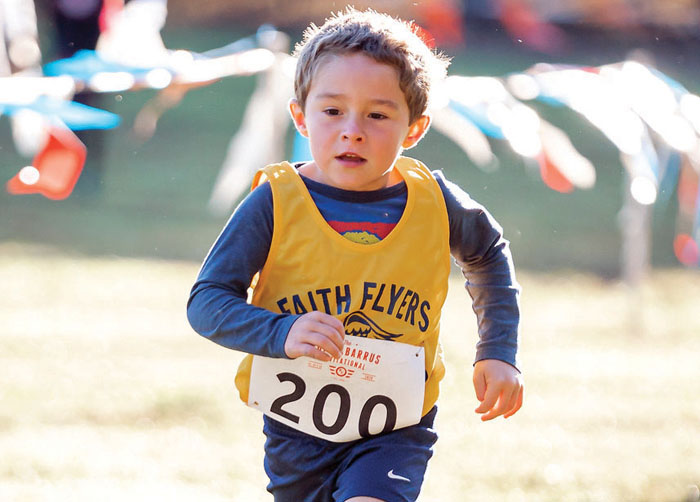 The first time I saw Frank Adams Jr. run, I thought immediately of his grandpa, long-time sportswriter and well-known runner Ed Dupree. Frank favors his grandpa in appearance and two other ways that I know of. His pace is steady, and he enjoys the experience immensely. Last Saturday, Frank ran his first 5K at the Ed Dupree 5K at East Rowan High School.

I asked Frank what he thought of stepping up to the longer distance after dominating many of the recent half-mile fun runs. Frank, 7, said, “Running a longer race than a fun run was a lot harder.” Frank does the Daily Mile at Shive Elementary where he usually runs between 2 and 2.5 miles, so this race was his longest distance yet.

Frank thinks he could run faster with some practice and more training. He said, “I like to run and win medals. I like to run in races because my papa Ed was a big runner and I do it to remember him. I have some of Papa Ed’s medals and a trophy in my room.”

I noticed right away that Frank is a smart runner too. It is very comical to watch kids, 12 and under, start the fun runs. They sprint as hard as they can and nearly all run out of gas within a couple hundred yards. Not Frank, who coolly lets them sprint ahead and sticks with his pace. Frank wants to continue fun runs this summer to see if he can improve his best 800 time and I hope he continues to display his megawatt smile afterwards.

Frank will also run cross country with Run Cabarrus AAU in the fall.  The 7-year-old age group runs 1.2 miles in competition and have five meets scheduled. Frank ran the Run Cabarrus Invitational last fall, his first attempt at 1.2 miles and handled it with ease.

Allison Adams, Ed’s daughter, and husband Frank are premier athletes themselves. They support Frank and his 6-year-old brother Drew by taking both boys to fun runs and mom runs with them. Allison said, “As parents, we try to support our boys in all sports they enjoy — golf, baseball, running, tennis, soccer and basketball. We want them to be well-rounded.”

Drew ran his best time of 3:40 in the fun run Saturday. He has run some fun runs with Frank but hasn’t been hit by the running bug yet. Allison thinks it’s coming soon because Drew is quick on his feet and will head to kindergarten in the fall at Shive with his brother.

She continued, “Frank is self-motivated and loves to run and be active. Other ways he favors his grandpa is a natural ability to pace himself. Through the Daily Mile at Shive, Frank developed a love for running and runs almost daily (with the exception of weekends). Frank knows about Ed’s streak of 24 years of running without missing a day, as well.”

I asked Allison how both boys remembered her dad. She said, “Drew was very young when Ed passed away, one month short of 2 years old. Frank was 3 1/2 years old. They remember my dad taking them to Dan Nicholas Park to play putt putt and to Granite Lake Park. They remember their Papa as a runner. My mom and dad kept Drew and Frank at their house in Faith a few days a week when I went back to school. They remember how much their Papa liked to eat, especially at Ichiban!”

Ed did not get to see Frank race. He was planning on coming to the Erwin 50th anniversary race in September 2017, but that was when he originally hurt his leg before he had to go to Baptist. Allison did show him pictures of Frank running the fun run while sitting with him at Novant the night he was admitted. Of course, Ed asked what Frank’s time was.

“My dad would truly enjoy watching Frank run. With all the time he spent training kids with the Faith Flyers, it would mean so much to him to be able to watch Frank race and enjoy himself. I only hope he can somehow see Frank and Drew when they run.”

Look for the upcoming Main Street Challenge in China Grove and other events at www.salisburyrowanrunners.org .

Woman charged with striking ex-boyfriend in head with baseball…