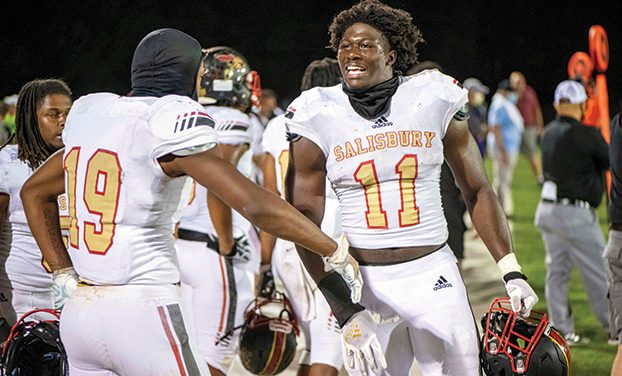 SALISBURY — Salisbury junior Jalon Walker had his legacy grow some more on Thursday.

Walker is the first Salisbury — or Rowan County — athlete to receive the Gatorade State Player of the Year Award for football.

Even West Rowan’s K.P. Parks, who was crushing the national record books back in 2008 and 2009, was denied the Gatorade football honor, a prestigious accolade established in 1985.

A.L. Brown’s Nick Maddox was the Gatorade football winner for 1997-98.

Carson’s Owen White was a recent Gatorade State Player of the Year Award winner for baseball in 2018.

When he got the good news on Thursday morning, Salisbury principal Marvin Moore headed to find Walker in his math class, so he could make a formal announcement.

“I made the announcement, but I’m pretty sure he already knew,” Moore said. “If it had been me who won this, I would’ve been jumping up and down and running around all over the place, but Jalon just sits back down and goes to work on a math problem. I said, ‘Jalon, this is a really big deal!’ He said he realized how big it was and he was thrilled about it, but he still had to get his work done. That’s just who he is.”

Academics (Walker has a 4.03 GPA) and character enter into the Gatorade equation, in addition to what happens on the field.

On the field, Walker is a mega-athlete who committed to the University of Georgia after a nationwide recruiting battle.

His versatility was huge for the Hornets (9-2) in the championship football season that concluded last Thursday.

He was primarily an outside linebacker, but at 6-foot-2, 220 pounds, he also was strong enough to play defensive end and mobile enough to spend some time at free safety.

“Jalon Walker is a super athlete who is always around the ball,” Oak Grove head coach Mark Holcomb stated in Gatorade’s press release. “He has a great combination of speed, strength and football knowledge, and he’s versatile enough to play on the line or at linebacker or cover receivers. One of the most well-rounded athletes I’ve ever coached against.”

Walker helped out Salisbury’s offense with a rushing touchdown in the playoffs. In the state championship game, he made two receptions — one that regained lost momentum for the Hornets and one for the touchdown that sealed the title.

For the season, he racked up 97 tackles, with 19 tackles for loss. He had eight sacks and two fumble recoveries. He was credited with 12 tackles in the state championship game.

An Under Armour All-American, Walker recently was named the Central Carolina Conference Defensive Player of the Year.

Beyond the football field, he was all-conference and all-county in basketball. He won the long jump in a track and field meet on Tuesday and placed third in the 100.