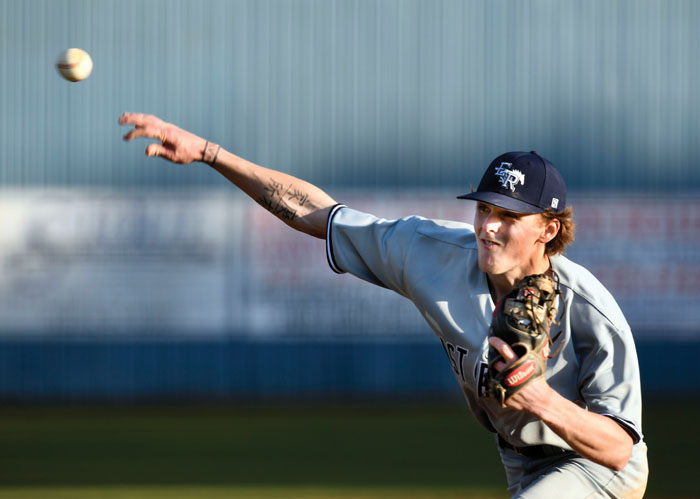 East Rowan's Cameron Padgett struck out nine and walked one in Tuesday's victory. File photo by Wayne Hinshaw, for the Salisbury Post

GRANITE QUARRY — Cameron Padgett, a junior right-hander committed to UNC, pitched a one-hitter to lead East Rowan to a 2-1 win against South Iredell at Staton Field.

East was held to four hits by two South Iredell hurlers, but Padgett was the difference-maker. He struck out nine and walked one.

East scored in the first inning when Cobb Hightower singled and came around on three wild pitches.

Tyler Hughesman’s double leading off the fourth was the only South Iredell hit.

After the Vikings scored for a 1-1 all tie in the fourth, East scratched out its second run in the fifth with a hit batsman, a walk and two sacrifices. Padgett’s sacrifice scored the decisive run.

STATESVILLE — Carson shelled Statesville 19-0 to stay unbeaten in the NPC.

Emory Taylor, Mason Duren and Simmerson combined on a one-hitter.

Carson is at West Rowan on Friday.

MOUNT ULLA — West Rowan got a must-win against North Iredell.

The Falcons prevailed 5-1 for their first NPC victory. It was the 100th victory at West for coach Seth Graham.

Steven Smith got the job done on the mound.

On the mound, Carson Crainshaw pitched into the fifth inning for the win, and Jack Weaver earned a save. Weaver struck out five.

Gavin Trantham had a strong pitching effort for the Green Dragons (0-3, 0-1).

South is at Central Davidson on Friday.

Crawford struck out five and walked one. Jackson Murphy pitched the fifth.

UNC signee Vance Honeycutt led off the second with a line-drive homer to center field.

Davie pitcher Jaydon Holder struck out seven and shut out the Titans until the sixth.