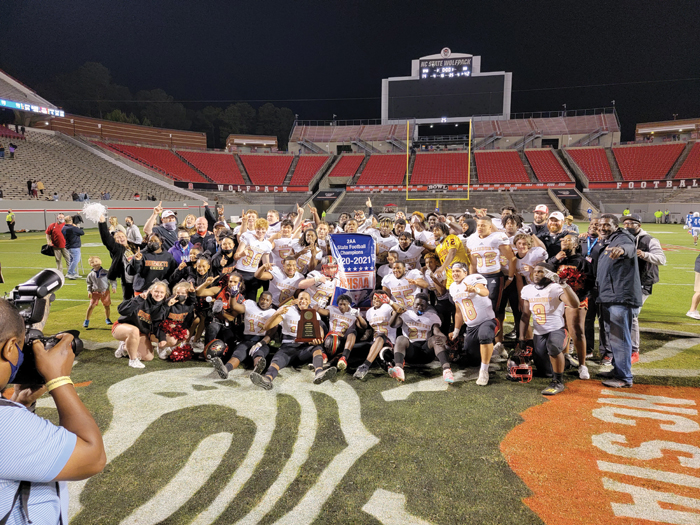 The victors gather for a final team shot before the ride back home. Josh Bergeron/ Salisbury Post

RALEIGH — In the end, the strangest season became the strongest season.

On Thursday night at Carter-Finley Stadium, Salisbury football fans finally had a chance to stop chewing their fingernails and to sit back and enjoy the show.

Salisbury’s 42-14 triumph over St. Pauls in the 2AA state championship was over relatively early. It was close to a done deal after a goal-line stand and 99-yard drive for a three-touchdown lead in the third quarter. Celebrating was a viable option after a Vance Honeycutt-to-Jalon Walker touchdown pass provided a four-TD cushion with 10:28 left to play.

Those were 10 minutes, 28 seconds of pure relief and pure joy.

You can bet reserve back Jeremiah Booker will remember his one carry for the rest of his life.

Senior Zae Clay will make a lot of stops in college, but he’ll never forget making the last tackle of the title game for the Hornets.

“It was nice to have one that didn’t have to come down to a last-second Wade Robins field goal,” said Robins’ pal Will Fowler, a state golf qualifier and a major football fan.

Robins’ right foot, booting from the left hash, never a routine combination for a kicker, provided the margin of victory over terrific Burns and North Davidson teams.

West Rowan and Carson softball and Salisbury girls soccer, outstanding teams with great players and great coaches, were eliminated from the state playoffs on Friday, less than 24 hours after Salisbury football prevailed, a reminder of how hard it is to get to the big stage, much less perform at your peak once you get there.

But throw out a half-dozen crazy minutes bridging the first and second quarters, and the Hornets were really solid on Thursday. They were clearly the superior team, dominating the line of scrimmage on both sides of the ball.

Head coach Brian Hinson declared Zae Neal, a 5-foot-10, 170-pound DB who plays more of a linebacker role, was the “unsung hero” of the season.

St. Pauls (8-1) actually had the ball more, as far as time of possession, but that mostly was because Salisbury (9-2) could score a lot more quickly. That 99-yard drive after the goal-line stand took only six snaps and two minutes.

“Great job by Salisbury with the goal-line stand and that did take the wind out of our sails,” St. Pauls coach Mike Setzer said. “We really needed to punch it in there.”

Searching for the roots of Salisbury’s latest championship, you have to go back to March 2017 when Hinson was hired as head coach.

It’s easy to forget now that Salisbury was 14-32 on the field and officially 11-35 after three forfeits in the four seasons before Hinson was hired. It’s assumed that Salisbury will always have good football because it always has a deep pool of athletes, but the Hornets have suffered through dry spells in their history. Athletes need structure, discipline, guidance, motivation, support. Hinson and his staff provided it.

“This championship was four years in the making,” Hinson said.

The turnaround started in the fall of 2017. There was a five-game winning streak, a 7-4 record and a first-round playoff loss to Red Springs, a school about 14 miles west of St. Pauls.

The 2018 season brought a 7-5 record and a blowout loss to Ashe County in the first round of the playoffs, but the Hornets made a huge jump in 2019 when they turned in a 9-2 regular season.

They were assigned to the 2AA East bracket for the playoffs, which meant some monster road trips, but they embraced the quest. They won at Washington, won at Hertford County, won at Randleman. They made it all the way to the 2019  state championship game, tying the school record with 13 wins, but struggled offensively on the big stage and lost 34-0. Probably they weren’t quite ready, and Shelby was awesome.

If the Hornets were a very good football team in December 2019, with 14 returning starters, they were a potentially great one for the 2020 season. But that season would be postponed until the spring of 2021.

They started preparing for it all in June, nearly a year ago, hoisting massive weights outdoors when COVID restrictions kept them out of their own weight room. They couldn’t touch a football for a while, but things started to come together, especially after Honeycutt arrived from his summer baseball adventures with the South Charlotte Panthers to devote himself to the football program.

Talented as they were, there were plenty of challenges ahead. The Central Carolina Conference is one heck of a football league. Even in 2019 when the Hornets made their playoff run, they tied for second in the CCC.

This season, they tied for third. They lost in Week 2 to Oak Grove (Jalon Walker got hurt in that one) and in Week 4 to North Davidson.

“We didn’t play our best and we lost to two good football teams,” Hinson said.

Those were tough times. Expectations were sky-high, and it looked like the Hornets were headed for disappointment. Critics were coming out of the woodwork. It was suggested that it was a fluke that they made it as far as they did in 2019, that they benefited from a weaker East bracket.

None of the chatter was pleasant. The bandwagon got a lot less crowded. The Hornets used it as motivation.

“That North Davidson loss was on a Thursday, and I didn’t think I did a very good job of preparing the guys,” Hinson said. “But after that, I thought we did a much better job of being focused as a staff and of preparing the team to play. I’ll take the blame for the losses, but give the credit for the wins to the kids. After North Davidson we were 2-2 and were playing for our playoff lives every week, but they got the job done.”

One more loss and they were finished. That loss never arrived.

In Week 5, when the Hornets headed to Central Davidson, which was 3-1 and had lost only to Oak Grove, they were only slight favorites, but they played lockdown defense. Then they put it all together the next week and destroyed a highly regarded Ledford team. That’s the night the team revealed it had state-championship possibilities.

“Our offense usually wasn’t pretty,” Hinson said. “Everyone wants you to spread it out and throw it around, but we were always run-first. As far as defense, we were always pretty good.”

Salisbury was a No. 7 seed in an eight-team bracket, so it never had the benefit of a home game in the playoffs. The Hornets blew out Maiden, which came in undefeated. Then a lot of defense and two clutch kicks lifted them past Burns and North Davidson and put them in the championship game.

It was a redemption game on Thursday night, for sure. The Hornets made it count. They left no doubt. Robins was only asked to made a lot of kickoffs and a lot of PATS.

The outcome was what defensive coordinator Mike Herndon expected it to be.

“Looking at St. Pauls on film, they were good and they were athletic,” Herndon said. “But they weren’t Shelby.”

When he was first hired, Hinson was quick to agree that Salisbury was a place where you could win championships.

He promised no miracles, just blood, sweat and tears. He and his staff provided the motivation and the inspiration, and the players provided the perspiration. They made it happen.

Subdivided  classifications for football move into the history books now.

The Hornets move forward. They move on to a new conference. They never won a conference championship in the CCC’s current alignment, but that league toughened them up for all the playoff success they experienced. Eight playoff victories in a two-season span — only one of them at Ludwig Stadium — is something to shout about. As road warriors, Rowan County has never seen anything like them.

They will graduate tremendous players in a few weeks. Honeycutt and Clay, who won back-to-back CCC Lineman of the Year honors, will be hard to replace, but Salisbury has great returning players, athletes and leaders.

The Hornets are here to stay, or at least as long as Hinson, who added AD to his responsibilities prior to this school year, stays.

He’s been a college coach, but he made up his mind in 2017 that coaching high school athletes was his calling.

That was a fortunate decision for Salisbury High.

More wins, more celebrations and more memories are sure to come.