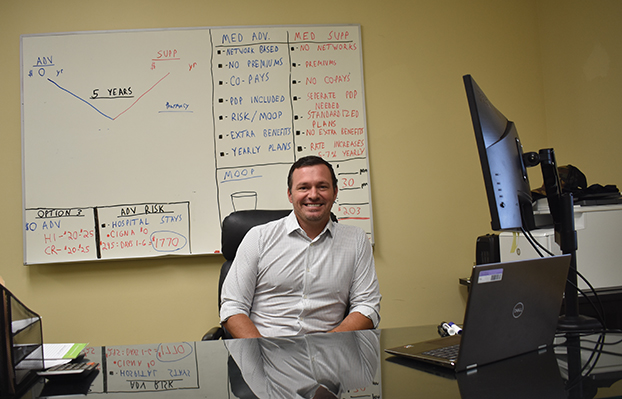 SALISBURY — A few days before the Country Club of Salisbury’s 2020 Labor Day weekend golf tournament was set to start, Seth Waller was in a difficult position.

His longtime playing buddy had injured his hand, leaving Waller partnerless before the club’s biggest tournament of the year. Waller recruited Russ Adams, a former professional baseball player who spent a decade in the major and minor leagues, to fill in at the last minute.

Waller was friends with Adams’ younger and older brothers, who have lived in Salisbury for several years, but didn’t know Adams very well. Adams was new in town, having just moved from Charlotte.

“I wasn’t even planning to play, but he talked me into it,” Adams said.

Waller and Adams quickly got to know each other after playing several rounds of golf over the course of the weekend. They didn’t win the tournament, but the two formed a friendship.

Several months later, Waller found himself recruiting Adams for a different endeavor. He wanted Adams to join him and his brother, Trent, as the third partner in Trident Insured.

The Waller brothers founded Trident Insured last year. The company, located at 1702 W. Innes St., focuses on providing guidance to older adults as they wade through their Medicare options.

Trent, a former U.S. Navy SEAL, runs the day to operations. Seth, the owner of Falcon Investments, works in an important behind the scenes capacity. 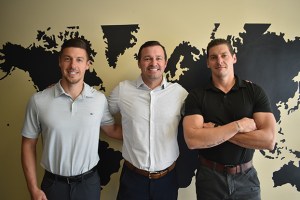 Seth Waller, Russ Adams and Trent Waller are the three partners at the core of Trident Insured. With Seth’s financial background, Adams’ career in professional sports and Trent’s time in the U.S. military, each brings a unique background to the team. Ben Stansell/Salisbury Post

After a successful opening in the fall, the brothers began looking for a third partner to help grow the business. They found their match in Adams.

Many of the same attributes that made Adams a great baseball player also made him a coveted business partner.

“We had a team, but we knew there was something missing, one thing missing that could propel us to what we want to be,” Seth said. “That’s when I approached Trent about Russ. Russ is a proven leader, has a good track record, has a lot of experience, is a good communicator. All of the things you want to check when looking for someone else.”

Once again, Adams found himself being talked into something by Seth, who was joined in his recruiting efforts by Trent. After thinking it over, Adams agreed to become the third partner. He is currently working to gain the necessary certifications to be a Medicare agent. Soon, he’ll start meeting with clients.

The last time Adams was recruited as hard as he was by Seth and Trent was when he was a top high school baseball prospect considering where to play his college ball. Adams grew up in the small North Carolina town of Laurinburg, the middle brother in an athletic family.

His older brother, Frank, excelled in golf and eventually played on the PGA Tour. His younger brother, Stewart, found his niche on the gridiron and played linebacker first at Appalachian State and then Catawba College.

When Adams was offered a scholarship to play baseball at the University of North Carolina, he immediately committed to the college he’d rooted for since he attended a football game in Chapel Hill as a child.

Adams had a solid freshman year, but had a breakout season as a sophomore. He led the Tar Heels in almost every measurable offensive category, starting 57 games in the infield and being named to the first-team All-ACC. The Toronto Blue Jays took notice of his successful season and drafted him 14th overall in 2002.

He made his major league debut two years later. One of his favorite baseball memories, he said, was hitting a home run in Yankee Stadium with his father in the stands. He’s also proud of tagging out famed Yankee Derek Jeter and blasting a grand slam off of Red Sox pitcher Jonathan Papelbon. 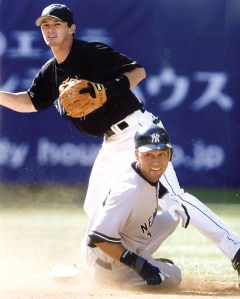 One of Russ Adams’ proudest moments as a major league player for the Toronto Blue Jays was tagging out famed Yankee Derek Jeter. Photo submitted.

Adams went on to play in 286 big league games, all for the Blue Jays, before playing for a few different minor league organizations. He officially retired from the sport in 2011 at age 30. Done with the game he’d played his whole life, Adams wasn’t sure what his next step would be.

“For the first couple of years after retiring from baseball, I was taking a breather, catching my breath a little bit and getting my degree at the same time,” Adams said.

He returned to Chapel Hill and finished his degree in communications before heading to Charlotte to pursue a career in real estate.

In his off time, he took up caddying for his older brother, Frank, who was competing on the PGA Tour. Although Adams doesn’t mind reliving his own glory days in the MLB, his eyes light up when he talks about caddying for his brother at the 2016 U.S. Open at the Oakmont Country Club in Pennsylvania.

Adams even played in a few mid-amateur golf tournaments himself, but didn’t make the jump to the tour. After selling real estate in Charlotte for several years, he yearned for a smaller community like the one he’d grown up in, where he could form meaningful relationships and make a larger impact.

He didn’t expect to find an opportunity to make an impact in Medicare, but he’s looking forward to helping older adults, like his parents, navigate their healthcare options.

“This business can provide guidance for people who are entering that phase of their life and need the right guys who can provide that trusted guidance in a local way,” Adams said.

Adams said he’s also excited to be part of a team again, which is what he said he’s missed most since hanging up his cleats about 10 years ago.

“I miss the locker room, I miss the guys, the dinners, the lunches, hanging out on off days, the camaraderie you have with your teammates,” Adams said.

With Adams on board, Trent and Seth said they will continue to expand Trident Insured.

“Our goals are to help as many people as possible, but as we grow we have much higher ambitions than just three employees,” Seth said. “This is our core team that we put together to achieve those goals.”