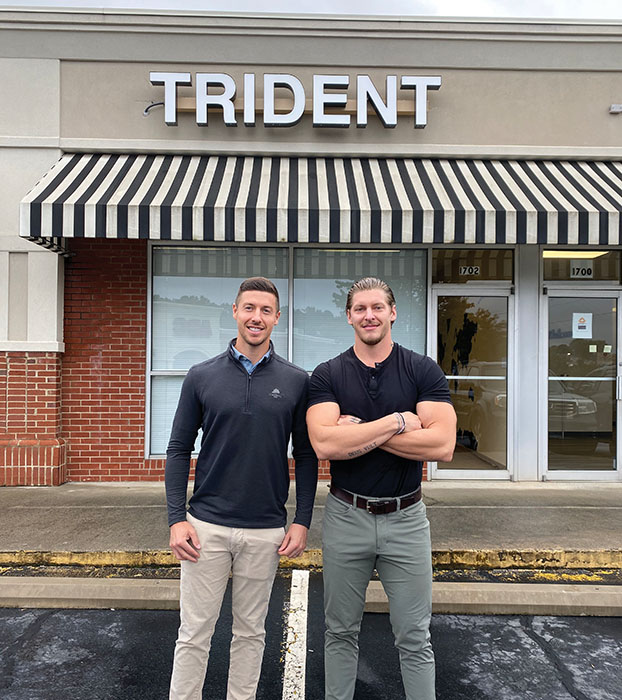 Seth and Trent Waller stand outside of the Trident Insured office. The company's name pays homage to the Navy SEAL seal, which depicts an eagle holding a trident. Ben Stansell/Salisbury Post

SALISBURY — As the tattoo artist was imprinting the ink on Trent Waller’s fingers, he joked with Trent that the permanent markings could come back to haunt him later.

“Whenever I got a lot of my tattoos, specifically my finger tattoos, they were sure to tell me, ‘Now, these are what we call job killers,” Trent said.

That’s ok, Trent said, because he had no plans of ever working in an office anyway.

At the time, Waller was serving as a U.S. Navy SEAL, and the tattoos being put on his fingers were nordic runes that spelled out “Valhalla,” the mythical heaven that Viking warriors ascended to after death. For Trent, it was a nod to the ever present threat of death in combat, which he saw plenty of throughout his four deployments.

Now, Trent is about to do the very thing he said he wouldn’t do — work in an office.

After retiring from active duty at the end of 2019, Trent, whose family has deep agricultural roots in western Rowan, had no plans to work a job behind a desk. He was anticipating a life of contract work that would once again put him into potentially dangerous situations overseas. But when COVID-19 made international travel difficult, he was forced to reconsider his options.

“COVID-19 for me, allowed me time to sit down and be with my family and really think and try to prioritize my goals and think about how I could continue to serve, where I see things going with the future of the local area,” Trent said.

That’s when his older brother, Seth Waller, pitched him an idea.

“I was like ‘Hey man, you still don’t really know what you’re going to do, but I’ve got a great idea that I’ve been thinking about for a few years,’” Seth said.

Seth’s proposal was that the brothers open a Medicare insurance firm that specializes in providing consultation services to people 65 years and older on their Medicare plans.

“We continued to chat about it and I think we really decided in August that this could work,” Seth said.

In a matter of weeks, Trent went from pondering a life of more combat to deciding to enter the Medicare insurance business. On Oct. 1, Trent and Seth will officially open Trident Insured at 1702 West Innes Street. Seth, who already owns Falcon Investments in Salisbury, will be a minority owner while Trent handles daily operations.

Although Seth was already knowledgeable about the rules and regulations surrounding Medicare, Trent knew little about the subject. He began to study the nuances of Medicare and was able to quickly obtain the necessary certifications to serve as an agent.

“For most people, the time period that we’ve made this happen in would not be possible,” Seth said. “It’s typically a six to nine month transition period to get something going and get the appropriate licenses. To see how fast it’s happened for him just kind of speaks to his nature and what he’s done in the past.”

Since receiving his certifications, Trent has continued to soak up as much information about Medicare as he can in preparation for open enrollment season, which begins on Oct. 15 and lasts until Dec. 7. During open enrollment, the busiest time of year for Medicare, users can make adjustments to their plans.

To learn more about Medicare, Trent has employed the same drive that helped him climb the ranks in the Navy SEALs, where he eventually rose to the rank of chief. 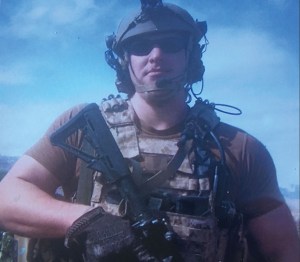 “I’ve passed the necessary exams, it’s just been about being a sponge and consuming anything and everything I can about Medicare,” Trent said. “Just like I did in (Navy SEALs), you have to be a subject matter expert in specific fields, whether that be demolition or being a sniper. You find your route and become a subject matter expert and that’s what I’m doing here.”

Even though he’s no longer in active duty, Trent views Trident as another way to serve the community that he grew up in.

“I want to come in, use a lot of the skills that I’ve learned and provide some clarity, communication and fill these gaps,” Trent said. “I really want to help these people by providing a true service.”

While other local insurance companies offer Medicare services, Seth said that there’s not many who specialize in the subject matter like Trident will. Upon opening, Trident will provide one-on-one consultations for free. Recognizing that many elderly people may not want to meet with him in person due to health concerns, Trent said that he plans on offering online consultations.

Along with guiding people as they make their Medicare decisions, Trent plans on hiring veterans to staff Trident. For him, it’s another way to help those who, like him, are returning to civilian life after serving.

“This is something that not only we could provide a service to our community and to the 65 and older generation, it’s something that I would hope we could replicate with veterans just like myself in their local areas,” Trent said. For more information about Trident Insured, visit the company’s website, email trent@tridentinsured.com or call 704-412-3993.