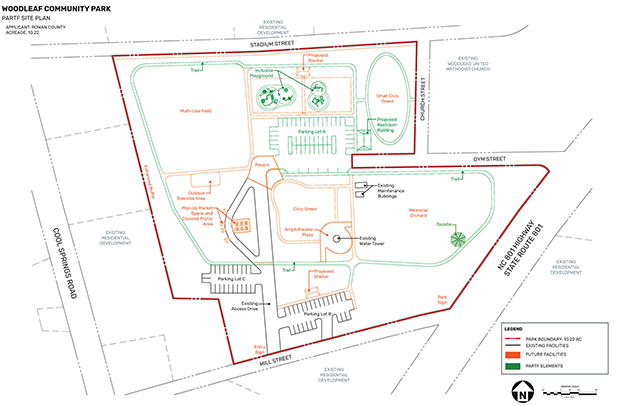 The county has submitted an application for funding from the state for the first two proposed phases of Woodleaf Community Park.

SALISBURY — The Rowan County Board of Commissioners on Monday took final steps for state funding to complete the first two phases of Woodleaf Community Park.

Commissioners approved the master plan for the proposed park during a meeting in March, which gave the Rowan County Parks and Recreation Department the green light to submit an application for a Parks and Recreation Trust Fund Grant from the state. The PARTF grant matches up to $500,000.

The application was due at 5 p.m. on Monday, but before the county submitted its application commissioners approved a revised cost estimate. The county’s submitted application now requests $354,346 from the state to complete the first two phases of the park, with a county match for the same amount.

The first phase of the park calls for a playground, signage, trail, a gazebo and landscaping. The second phase will feature a parking lot and restrooms. In total, the first two phases will cost approximately $700,000.

“This will be a good project for that side of the county,” Chairman Greg Edds said.

County Manager Aaron Church said the county’s portion of $354,346 is on hand and ready to be spent. Don Bringle, director of Parks and Recreation, said the county could find out about state funding as late as August. Commissioners have already approved the funding to roll over into fiscal year 2021-22 in case the county is awarded the grant after the new fiscal year on July 1.

Once the county completes the first two phases, it will turn its attention to the third phase, which calls for a shelter, outdoor fitness equipment area, more parking and a civic green. The county has not budgeted money or requested funding for the final phase. In total, the park will cost around $1.1 million.

Commissioners will meet for budget work session on Thursday at 10 a.m. to prepare the fiscal year 2021-2022 budget. Commissioners will also discuss funding the county is set to receive from the American Rescue Plan.

• Commissioners unanimously approved a request from Francisco Castro to exceed the county’s noise ordinance during a Mother’s Day celebration gathering on Saturday between 2-11 p.m. The celebration will be held on property owned by Ignacio Castro Jr. at 760 Oak Mountain Road in Salisbury. It will be open to the public and is set to feature live music and free food and beverages for approximately 90 guests. Parking and portable toilets will be made available on the nearly 15-acre parcel. A noise complaint was called in regarding an event at the property several months ago. Castro, who attended Monday’s meeting via Zoom, said organizers have positioned the speakers and stage differently for this event to direct noise away from neighbors. The county received no communication via email or by phone from neighbors about Castro’s request and no one spoke against it during the meeting.

• The board approved a request from Christina Brown Foskey for a waiver from the subdivision ordinance standards to create and convey three new tracts along 300-400 block of Bostian Oaks Lane. Foskey traces the property’s ownership back to her grandparents, Mitchell and Dorthy Bostian. Foskey proposes to convey the lots to her cousins, the grandchildren of Mitchell and Dorthy Bostian.

• Commissioners passed three proclamations: the first declaring May 10-14 as Law Enforcement Week, the second establishing May as Shield-A-Badge With Prayer month and the third recognizing May as “Exercise is Medicine” month.