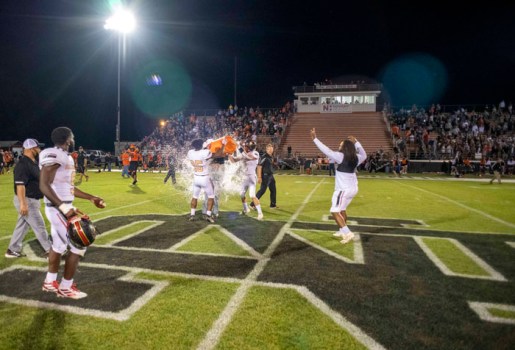 Salisbury’s head coach Brian Hinson gets doused by Marcus Cook (25) and Jackson Murphy (4) as celebrations spilled onto the field after Salisbury edged North Davidson. Photo by Jon C. Lakey/ For the Salisbury Post 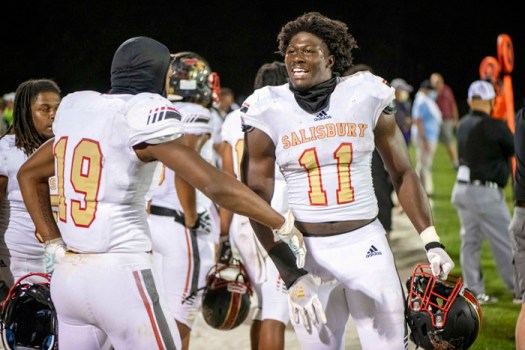 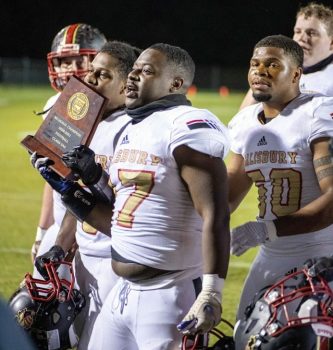 Salisbury Jeremiah Booker (17) carries the regional trophy after the Hornets' victory. They will face the St. Pauls Bulldogs next. Photo by Jon C. Lakey/ For the Salisbury Post

WELCOME — Oops, they did it again.

“We love being underdogs,” junior linebacker Jalon Walker said after seventh-seeded Salisbury (8-2) won its sixth straight game and gained a final-round berth opposite St. Pauls. “We love being on the road. You get into a situation where there’s no way around it and you just do what you have to do.”

SHS spent the first three quarters working the body against No. 1 seeded North (8-2). In the fourth it landed a haymaker, tying the score 21-21 on Vance Honeycutt’s 71-yard touchdown pass to junior Marcus Cook and taking its only lead when Robins kicked a 22-yard field goal with 1:09 to play. The victory was secured when Honeycutt, working as a disruptive defensive back, broke up fourth-and-21 pass play with 10.6 seconds remaining.

“We’ve had two really great football games the last two weeks,” said Salisbury coach Brian Hinson. “The games we lost (to Oak Grove and North Davidson in March), we didn’t have the preparation where we needed it. Since then, I’ve made them promise that if they get prepared, the coaches will be prepared. We’ve held that deal since then.”

Salisbury was more than ready, finishing with 19 first downs and 455 yards total offense, while limiting ND to 44 yards on the ground. Three Hornets surpassed 100 yards rushing — JyMikaah Wells (120), Honeycutt (111) and freshman Mike Geter (107). Honeycutt, the senior quarterback, ran for a second-quarter touchdown and passed for two others.

“Our game plan worked out perfectly,” he said after passing for 101 yards. “We controlled the line of scrimmage and executed our plays. That’s the name of the game. It wasn’t easy, but it’s not supposed to be easy.”

He can thank the yeoman’s work provided by offensive linemen Tkaii Gaither, Jacoby Heggins, Sam Evans, Jacquez Peele and 285-pound sophomore Bryan Rosado. “Four of those guys are seniors,” Walker noted. “They were prepared, they played their keys and they executed. They set the tone. Behind them, we were all mentally strong, all-around strong.”

They were also down 7-0 before Honeycutt orchestrated a short-field scoring drive early in the second period, capped when the 6-foot-3 signal-caller curled into the end zone on an 11-yard rollout. North Davidson regained the lead with 4:34 left in the half, when senior Travarius Moore scored on a 10-yard run. A key play unfolded when QB Tedric Jenkins fired a 41-yard completion to receiver Jamarien Dalton, setting up a first down from the Salisbury 19.

“They have a really tough defense,” Jenkins said after completing 17 of 33 passes for 225 yards and two touchdowns. “Walker’s the big threat, but the rest of them get after it.  You have to game-plan for him and go away from him. But all of them, they were the better team tonight.”

Salisbury tied the score 14-14 on its ensuing possession. Honeycutt alternated handoffs to Wells and Geter, scrambled 19 yards to the North 30 and then hoisted a 30-yard TD strike to freshman Deuce Walker — Jalon’s kid brother — just 1:46 before halftime.

After recovering an onsides kick to launch the second half, North navigated 35 yards in six plays and went up 21-14 when Reid Nisley made a fingertip catch on an 11-yard TD throw. Only 6:59 remained when Honeycutt connected with Cook, who made a backpedaling catch, eluded a defender and sprinted to paydirt down the right side. The Black Knights squandered a chance to reclaim the lead when Jake Marion’s 36-yard field goal attempt fluttered wide right, setting the stage for Robins’ decisive kick. One week after pressing a pillow over Burns’ season, he was cooler than the vegetables in your crisper, splitting the uprights from the left hash mark.

“Last week helped me out this week,” he reasoned. “I was confident and I was ready — and thankful that my teammates put me in position to win the game two weeks in a row. All I had to do was push it through.”

All that remained was the hit Honeycutt put on Nisley to douse North’s final rally. “I saw I had him open,” Jenkins reported. “Then No. 3 (Honeycutt) flew in out of nowhere and got him. That was the ballgame right there.”

It was, cementing a victory that hurdled Salisbury within one triumph of a state crown.

“I think we all sense it,” Robins said. “It’s our time now. This whole team is ready.”

NOTES: Salisbury rushed for 354 yards … Dalton had six receptions for 126 yards and a TD. … Thursday’s 7 p.m. championship game will be played in Raleigh or Chapel Hill. … No. 2 seed St. Pauls (8-0) advanced with a 34-23 semifinal round win over favored Washington. … Salisbury won the state title in 2010 and bowed to Shelby in the 2019 final.