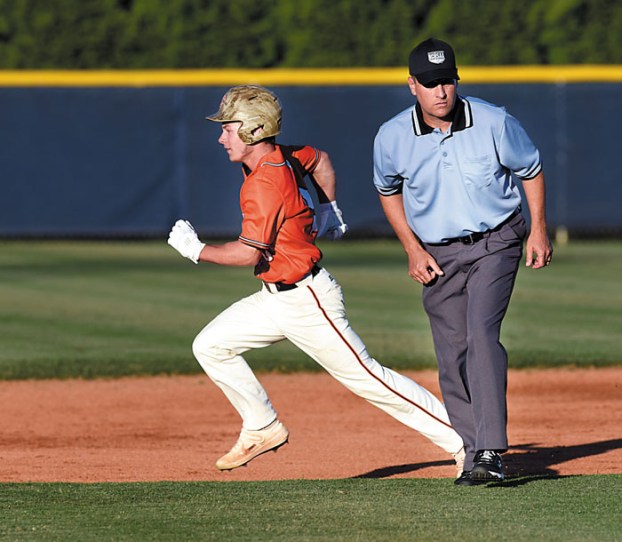 Carson's CP Pyle take off for second base. File photo by Wayne Hinshaw, for the Salisbury Post

Fourth in a series of reports on local teams …

CHINA GROVE — Ten miles away, East Rowan has four legit No. 1 pitchers, three of them Division I recruits.

In contrast, Carson is starting over on the mound. The five guys who pitched varsity innings in the shortened 2020 season are all gone.

Still, history tells us coach Chris Cauble and the Cougars will be a factor in the North Piedmont Conference race.

They’ll figure it out, so no one is counting them out.

Some guys who have never played much probably will become household names by June. Seniors like CP Pyle and Jake Harris, who have been around forever, will have career years.

“On the mound, we are inexperienced, but we’ve got guys we believe can do the job,” Cauble said. “We’ve got good players. We’ve got very good team speed, the kind of speed that we don’t normally have. We’ve got a very strong outfield, guys who can run and throw and can play any of the three spots.”

Carson is versatile. Pyle, the center fielder, may play some games at second base. Caden Hudson will be a key outfielder, but he’ll also turn up some at third base, as the Cougars try to get all of their best athletes on the field. They will mix and match depending on who is pitching.

But pitching is 60 to 75 percent of this game. That’s going to make or break the Cougars.

Catawba recruit Dylan Driver hasn’t really pitched yet for the Carson varsity, but he proved in NC3 baseball at Newman Park during the summer months that he can be a stud on the mound, as well as at the plate. Driver was off to one of the greatest offensive starts in county history when the 2020 season was cut short.

“Driver will be the No. 1 arm, the go-to guy,” Cauble said. “He would have pitched quite a bit last year if we’d had a normal season.”

The No. 2 pitcher will be Hayden Simmerson, a hard-throwing sophomore. Simmerson has experienced two knee injuries — one duck-hunting and one deer-hunting — and is scheduled to have minor “clean up” surgery after the spring and summer baseball seasons, but he’s ready to go. He got the save on opening night in an exciting 10-9 win at Davie County, striking out the last batter with the tying run at third.

Mason Duren will be the third pitcher and can hurl long or short relief. He’s pitched in a lot of jayvee and Junior Legion games for Carson.

“He has a knack for getting guys out,” Cauble said.

Emory Taylor, Aaron Coe and Owen Blackwelder could get some innings.

The starting catcher entering the season is sophomore Cameron Burleyson, who has come back from surgery and rehab that knocked him out of basketball season. He won the job during the spring league. Carson also has senior catchers Richard Prange and Zack Proctor.

The outfield will include Driver, Pyle and Hudson, all of whom stood out for the Rowan NC3 summer team. They bring speed, gloves and power to the table. Pyle has been a starter since his freshman season.

TJ Jones, a senior, will get his first chance to play a key role. He’ll be in the outfield when Driver pitches or when Hudson or Pyle shifts to the infield.

Harris will be the first baseman and will be counted on to drive in runs in the middle of the lineup. Garrison Collins backs him up.

Jordan King, a transfer from East Rowan, is a first baseman who will get the bulk of the DH at-bats. He had three RBIs on opening night.

Hunter Burris, another good athlete, will usually start at second base, although Pyle could see some time there.

Taylor should be a huge addition offensively and defensively. The sophomore already has made a major impact on Carson basketball and football.

“He’s really a special athlete in all three sports, and you don’t see those guys that much anymore,” Cauble said.

Taylor, who had a triple in the opener, has the speed to play the outfield, but Carson usually will ask him to man shortstop.

Simmerson is a strong-armed athlete who can play shortstop or third base when he’s not pitching.

Hudson will play some third.  Blackwelder, Carter Dowd and Samuel Safrit are other third-base possibilities.

“We’re going to be young in the infield, especially when I look at our outfield,” Cauble said.

In a scrimmage against Marvin Ridge, Carson only managed three hits, but the Cougars pounded out 16 against Davie on opening night. Seven players had two each.

“A pleasant surprise,” Cauble said. “Sixteen hits and even most of our outs were hard-hit. And we showed a lot when we got behind 4-0 early. We didn’t get down. Davie has a good team, but we came in and answered with a lot of hits.”

At this point, Statesville is expected to field a team, which is important. Every conference victory is vital with the playoff structure for this COVID-condensed season. Only the NPC champion is guaranteed a 3A playoff berth, although wild cards will be possible. Two wins over Statesville would be helpful when they start figuring wild-card percentages.

If the pitching holds up, Carson should be in the hunt for all the banners.

“East has dominant pitching and West Rowan will be strong,” Cauble said. “North Iredell has a stud pitcher, so they’re going to be hard to beat at least once a week. South Iredell can really hit. It’s a good league. We’re looking forward to the challenge.”

From staff reports WELCOME — East Rowan pitchers combined for 15 strikeouts as the Mustangs opened with a 9-4 non-conference... read more