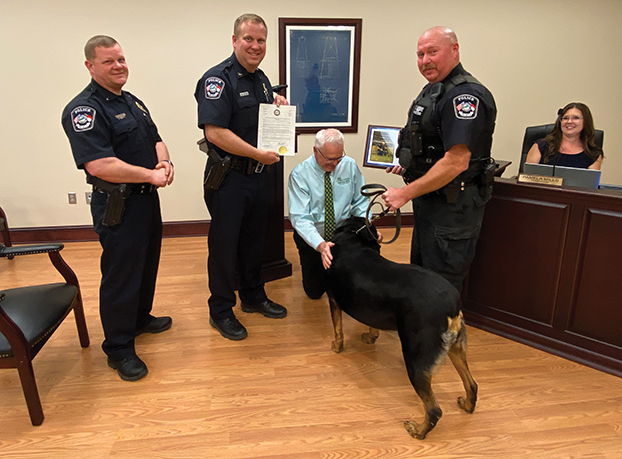 The China Grove Town Council recognized its now retired K-9 officer for its service to the police department. Mayor Charles Seaford pets Kenzi while officers pose with her honor.

CHINA GROVE — The town council on Tuesday night passed an amendment altering its policy regarding tree limbs and yard scraps.

For a resident to have their limbs picked up by the town’s public works department, the limbs must meet certain length and weight requirements. No whole trees are allowed and the limbs must also have been cut by the resident and not a contractor.

Under the amended rule, the town will now pick up limbs that may not meet the requirements if the person requesting limb pickup is an adult older than 65 or disabled.

“If it’s a senior citizen and the church group cuts it or their nephew cuts it, then we want to help them so we’ll go out and pick it up,” Deal said.

The amendment, which gives the town manager discretion to decide which residents require help with their limbs outside of the current ordinance, received unanimous support.

In addition to passing the amendment, council members also discussed potentially purchasing a claw truck that would help the town collect and transport limbs and yard scraps more efficiently in the future.

Deal pointed out it would be a one-time purchase, but the town would then have to figure out what exactly to do with the limbs. Council members talked about buying a grinder to mash the limbs and sell the mulch. Deal mentioned the town could work out a deal with the county to borrow its grinder.

Unless the town finds an alternative funding source to purchase the claw truck, talk about buying the vehicle will remain just that.

Mayor Charles Seaford said the next year’s budget — council members voted on Tuesday to schedule a budget planning meeting for May 4 at 5 p.m. — will likely be tight and won’t include room for a claw truck. Deal said the town is slated to receive federal funding from the recently passed American Rescue Plan and that he plans on exploring how the funding could be used, potentially for a purchase like a claw truck.

• During the meeting, council members recognized the retirement of China Grove’s longtime K-9 officer, a Rottweiler named Kenzi. Officer Jeff Washam has been Kenzi’s handler since he got her as an 8-week old puppy in 2013. After becoming a certified K-9 and part of the town’s crime-fighting team, Kenzi made more than 130 narcotic finds, completed nine successful tracking operations and helped officers seize more than $40,000 during a vehicle stop.

The highlight of Kenzi’s career, Washam said, was helping officers locate a disoriented elderly woman who was reported missing from her home around 3 a.m. Using the scent from a book the elderly woman dropped on her lawn, Kenzi tracked her down a half mile from her home near a pond.

Kenzi officially completed her service with the department on March 14. Washam, who is Kenzi’s owner, said there are no big plans for her retirement, but he said she’ll probably be happy she doesn’t have to ride around in the cruiser every day.

The department’s next K-9 officer, a Belgian Malinois puppy named Drogo, is currently being trained by Washam and a few other officers. Washam said Drogo will likely be certified and ready for duty by next year.

• The town council read a proclamation honoring the Carson High School girls basketball team for winning the 3A state championship on March 6. The title win concluded a perfect season for the team. China Grove will further honor the team with a parade through downtown at 2 p.m. on Saturday, April 17, during the CruiseIN the Grove celebration. During the meeting, the town council adopted an ordinance closing the northbound lane of main street for the cruise in.