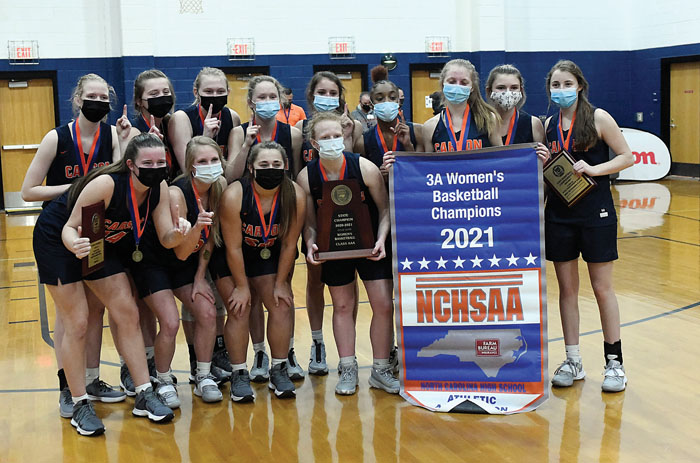 Carson girls won the 3A state championship on Saturday. Photo by Wayne Hinshaw, for the Salisbury Post

CLIMAX — A program that began with 74 losses in its first 80 games, now stands as a girls basketball state champion.

Brooke Stouder, the same Carson coach who got things started in 2006 and took some frightful beatings from almost everyone who had a team, now owns a 3A state title that will stand forever as a monument to patience, pluck and perseverance.

The Cougars capped a remarkable season and a remarkable story when they came back to beat Asheboro 51-40 on Saturday night at Providence Grove High in a small town of 3,500 or so that is appropriately known as Climax. The victory was the last act in a perfect 19-0 season.

When the triumph was in the history books, chants of “Undefeated! Undefeated!” rained down from Carson fans like Colbie Perry 3-pointers.

No Rowan County girls basketball team had won a state title since Salisbury claimed its fourth one in 2011.

In this crazy COVID season, the masked Carson girls joined the Salisbury squads of 2003-04 and 2009-10 as unbeaten Rowan girls basketball teams.

To view more photos from the game, click here.

While its powerful volleyball teams reached the 3A title game twice, Carson had never won a state championship in any team sport prior to Saturday.

“This was just an awesome win, an awesone game,” Stouder said. “No question about it, we beat the most athletic team that we’ve faced all year.”

Asheboro (15-1) had an awful lot going for it— experience, size, quickness, a legendary head coach in 73-year-old Don Corry — but Carson is Carson. The Cougars found a way.

Senior forward Carleigh Perry received a sportsmanship award prior to the game and a well-deserved MVP award when it was all over.

She had 19 points and nine rebounds and spent a lot of her day battling a 6-foot-1 athlete named Diamond McDowell, who could jump higher and run faster. But Perry more than held her own. Perry is the personification of grit and toughness.

McDowell had 16 points and 12 rebounds and was named Asheboro’s top performer.

“We got two fouls on her early and that helped,” Perry said. “That took some aggressiveness away from her.”

Neither team looked like a state champ in the first quarter. Turnovers mounted. Shots clanged. Carson is never nervous, but the Cougars looked jittery.

Carson struggled even more offensively in the second quarter, sliding behind by 20-17 at the break.

Senior guard Ellie Wilhelm, voted the Cougars’ most outstanding player by the media, kept Carson afloat in that first half with flawless shooting and eight points.

“They were playing me very tight,” Wilhelm said. “So that was giving me chances to go to the basket.”

Stouder was still confident at halftime. Carson was just 1-for-6 on 3-pointers and hadn’t even shot a free throw, but the defense had gotten stop after stop. There were lots of positive trends.

“We were getting more rebounds than they were (19-14) and we were turning it over less (12-10),” Stouder said.  “They have very quick guards that we were sagging off of and playing for the drive. They had made a few 3-pointers, but we still didn’t think they could beat us from 3. Our concern was getting beat inside, but we were doing a pretty good job there.”

The third quarter normally has been Carson’s weakest quarter this season, but on this night it’s where the tide swung.

Carleigh Perry is versatile and stepped out and made a big shot to get the Cougars started in the second half. Wilhelm threaded the needle through several Blue Comets with a transition pass and Hannah Isley made the catch and the layup.

“Hannah was running the floor, and I saw the pass was there,” Wilhelm said.

Then Wilhelm dropped in  a soft floater in the lane, Colbie Perry got a bucket going to the rim, and Carleigh Perry scored on a drive. Then she grabbed the offensive rebound on a miss and drew McDowell’s third foul.

“It was a really solid quarter for us,” Stouder said. “We were only ahead by three, but we had all the momentum going our way.”

With 5:52 left to play, Wilhelm had time and space to measure a 3-point try from the left wing and didn’t miss it. That put the Cougars up eight, the first serious separation of the night for either team, and for the first time, Asheboro sensed that it was in trouble.

Carson worked the clock effectively down the stretch, got the last big hoop it needed from Lani Isley and made free throws. And the stops and the forced turnovers never stopped coming.

The nine-point and 11-point margins in final minute were the largest of the night.

Colbie Perry didn’t have a good shooting night, but she didn’t let that affect her defense. Her assignment was Asheboro’s 3-point shooter Ashton Maness, and Maness was only able to make one shot. Perry blocked one of her shots.

“What matters is that I held a good player to three points and we won the game,” Colbie Perry said. “I’m just so happy. Even when the shots aren’t falling, you can still play defense. We all played good defense.”

Asheboro hurt itself with 3-for-11 foul shooting. There were some key misses.

Wilhelm shot 6-for-7 for her 13 efficient points. Hannah Isley had seven points and eight rebounds. Lani Isley did the bulk of the ballhandling against really quick people and had only three turnovers.

Mary Spry (ankle) was able to play and her interior defense and six rebounds were really helpful. Kary Hales had some good minutes off the bench. Jaden Vaughn, one of Carson’s six seniors, also got in the game.

Asheboro actually made two more 3-pointers than the Cougars, but it didn’t matter much.

“I was just sitting here just now thinking about all of it, the whole journey,” said Carleigh Perry, who came back from two traumatic knee injuries to lead her team on Saturday. ” I’m so proud of every one of my teammates.”