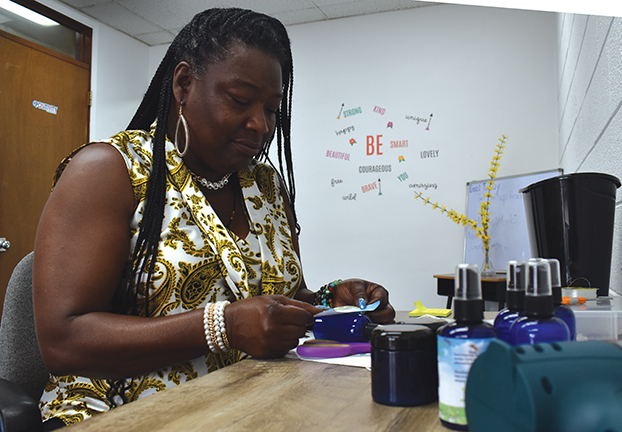 Jill Tindal places labels on a bottle of her homemade bug spray, which she said is made using all-natural plant-based oils. Ben Stansell/Salisbury Post

SALISBURY — Two years ago, Jill Tindal made a life-altering decision.

After teaching preschool and elementary students for three decades, Tindal suddenly gave up her career in formal education.

“In 2019, I just kind of got burned out. So I came out of the classroom,” said Tindal, a lifelong Salisbury resident.

Still needing a revenue stream to help pay the bills, Tindal found a product she’d been giving away for free. For years, Tindal had been handing out homemade eczema cream and plant-based bug spray to family members at large gatherings and reunions.

After retiring from teaching, Tindal decided to start selling her concoctions.

“It suddenly became a home business,” she said.

Tindal named the business “Tindal Touched” and launched a website. The same family members who had been getting her carefully crafted products for free suddenly became her marketing reps. They started spreading the word to friends near and far. She has since shipped bottles to New York and California.

While her main focus has been on growing her product line of creams and bug sprays, Tindal, a certified life coach, has also launched life coaching services and recently started tutoring elementary students. All three services are included under the Tindal Touched umbrella.

Although she was operating the businesses out of her home for some time, she outgrew the space recently moved into a storefront at 1915 W. Innes St., Suite 101. The small office space will be part tutoring center, part life coaching facility and part store. It’s located in the same building where her cousin, Sabrina Harris, has relocated her Vibes arts incubator.

Tindal never imagined she would have a storefront. Even when the demand for her homemade products started to grow, Tindal didn’t envision moving the business out of her home.

“About two years ago, a lady walked into my house to purchase some cream and said to me, ‘I see you in a storefront.’ I said ‘No ma’am. You don’t because I don’t have intentions of having a storefront,’” Tindal said. “I thought about that moment when I walked in this office for the first time.” 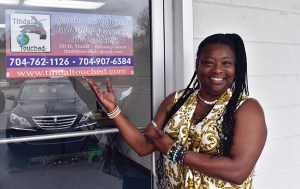 Jill Tindal gestures toward the sign she recently placed on the door of her new storefront and office space. Ben Stansell/Salisbury Post

Tindal will still make her “Smooth Skin Again” cream and “ByBugs” spray at home using a 65-year old double boiler she bought online. The double boiler is a replacement for the same device she was using before, which had been her aunt’s for decades.

Tindal orders the all-natural ingredients for her products from trusted suppliers across the country, many of whom are in California. She measures out the proper amount of each additive and combines them in the double boiler by cooking them over low heat. Once they are properly mixed, Tindal hand pours the solutions into bottles that go out to customers.

Gerald Wilkes visited Tindal Touched a few days ago to pick up a new bottle of cream and to thank Tindal. He said her product is the only one that helps heal scars on his back. Wilkes, born and raised in Spencer, bumped his head into a 7,200 volt power line while working in a bucket truck in Virginia.

After the shock, Wilkes had skin grafted to his back from his legs and arms and spent several months in the hospital. Wilkes, a military veteran, said he tried every cream available on the market to help ease his back pain, but nothing worked. When Tindal was told about Wilkes’ dilemma by his mom, who is one of her friends, she passed along a bottle of her cream.

Wilkes hasn’t used anything else since.

“Any cream that can help with smooth skin, I’ve tried it,” Wilkes said. “That cream is the truth. I use it non stop because it works. I’ve been Tindal Touched.”

Helping people like Wilkes encouraged Tindal to grow her operations from a small, home business to a bonafide storefront.

“I really enjoy it because that’s what I want to do: I want to give people that part of themselves that is more peaceful and more calm,” Tindal said.

Her overall goal, she said, is to “heal the nation” with her creams and bug repellants.

More information about Tindal Touched can be found by calling 704-762-1126 or at tindaltouched.com.