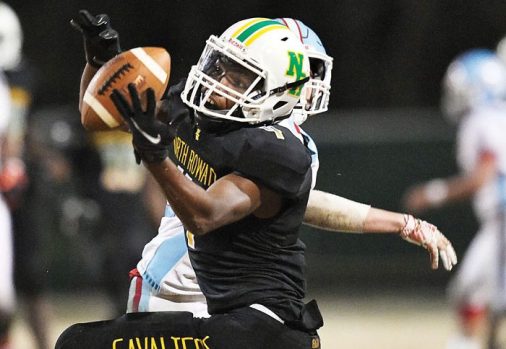 North Rowan's Amari Mcarthur, the county’s reigning 100 meters champ, is among a talented group of receivers returning for the Cavaliers. File photo by Wayne Hinshaw, for the Salisbury Post 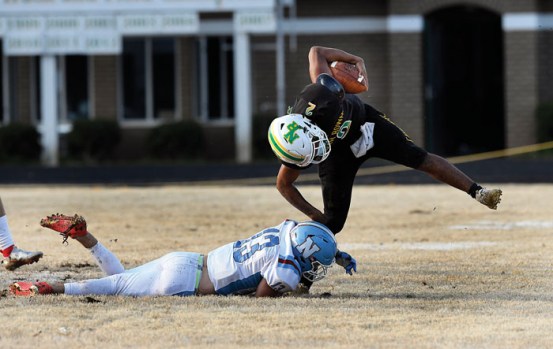 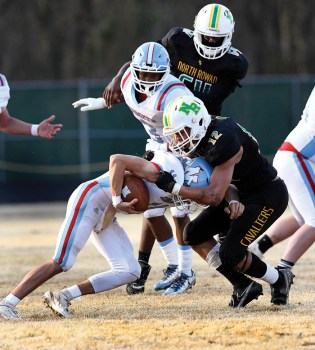 SPENCER — First place will have to wait for the 15th-ranked North Rowan football team.

With a chance to slide into the YVC driver’s seat, the defending-champion Cavs rolled a gutterball in Friday’s 15-0 homecoming night loss to visiting North Stanly.

He’s right. North Rowan’s high-octane offense was rendered harmless. Running back Zay Davis, who’d previously zigged and zagged his way for more than 400 yards and five touchdowns, collected only 12 straight-ahead yards on six carries. The Cavs managed only five first downs — none in the second half — and were limited to 64 yards total offense.

“It’s very disappointing because we didn’t execute,” senior quarterback Kyree Sims explained after completing three of 10 passes for a net of three yards. “We didn’t play up to our standards. We played down.”

“We don’t have the biggest-sized D-linemen, but we’re quick to the ball,” he said. “If you’re not fast, you don’t play D-line for us. We’ve got really fast guys, first-through-sixth.”

In a game that was more boxing than ballet, the teams spent the first half eyeing each other like a couple of sullen heavyweights. The Cavs took nine snaps in North Stanly territory and advanced as deep as the enemy 28-yard line, but never threatened. The Comets, sparked by junior QB Luke Shaver (8-for-14, 151 yards), reached the NR 22 before a second-quarter holding penalty cost them 13 yards. “Both teams hurt themselves with penalties and mistakes,” said Pearson.

North Stanly broke the drought with 7:45 remaining in the third period, when running back Cam Smith accepted a handoff and took one step to his right, then quickly reversed field on a 51-yard touchdown ramble down the left side.

“The cornerback and middle linebacker were supposed to cover him,” said Cavs’ senior Tsion Delaney. “But their line sealed us off and he got outside. After that, he was just too fast to catch.”

North Rowan squandered a scoring chance after sophomore Amari McArthur returned the ensuing kickoff 55 yards to the NS 27. But the drive stalled when Sims was dropped in the backfield and an illegal touching flag led to a fourth-and-23 punting situation.

“We planned to go score and go win this game,” said Cavs’ center D.J. Simmons. “But miscommunication on both sides of the ball hurt us. We missed a lot of blocks and there were too many bad snaps.”

It got worse early in the fourth quarter. North Stanly stretched its lead to 13-0 when Shaver capped a six-play, 69-yard drive by bulldozing three yards into the end zone. Then the Comets’ bloodhounds picked up a scent of first place — and a likely conference title — by forcing North Rowan to begin its final drive from its own 1-yard line. On first down, a holding penalty in the end zone against the Cavs produced, by rule, a game-sealing safety.

“This hurts. It really does,” Delaney said afterward. “We didn’t play our game. Nothing went right. And all of that is on us.”

North Rowan can secure second place in the conference — and the accompanying 1A state playoff berth — with a victory in its final YVC game at South Davidson on April 5.

“We should still make the playoffs and hopefully make a run that way,” Pearson concluded. “We’ve been able to find our big plays in the running game, but we couldn’t tonight. That forced us to do more with the passing game, which didn’t produce. What all that says is we’ve got to be better, better than this.”

NOTES: North Stanly entered ranked 22nd in the state’s 1A poll. … Smith, a 160-pound sophomore, led all rushers with 87 yards on seven carries. The Comets finished with 11 first downs and 276 total yards. All six of Shaver’s first-half completions went to wideout Stefan Harris, including a 39-yard pickup early in the second period. Two snaps later, Delaney recovered a fumble for the game’s lone turnover. … Sims, who ran for 53 yards on 17 attempts, did not complete a pass in the second half.