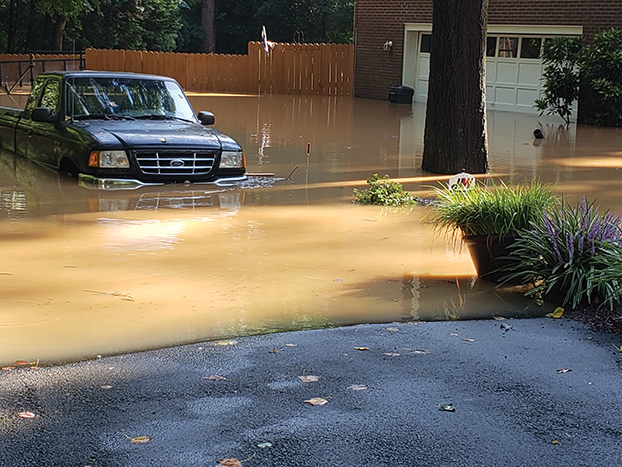 Janet Pope lost one of her vehicles in a flood that damaged her Salisbury home. Photo submitted.

SALISBURY — With heavy rain in the forecast, Judy Zirt and her husband made an impromptu trip to Lowe’s.

It was early November and the couple rushed to the home improvement store in search of sandbags, which would be their first and last line of defense against expected flood waters.

The couple didn’t have sandbags months earlier on Aug. 31 when a torrential downpour caused 2 feet of water to fill the recently renovated basement of their home in Country Club Hills. The water had encroached on their home from a tributary of Grants Creek, which flows through their backyard on its journey to the Yadkin River.

“We had just had hardwood floors finished in March and every bit of that was destroyed (in August),” Zirt said. “We had to have walls taken down. We had to have floors taken up. It was horrendous.”

That’s why the Zirts recruited friends to help them fortify their patio with sandbags several months later when they were worried a heavy rain would ruin their basement again.

“We panicked and rushed out, and we had friends helping us put sandbags against the house,” Zirt said. “Fortunately, it just came up to the patio, just about 3 yards from the house.”

The rain, lucky for them, wasn’t as heavy as the late August downpour. 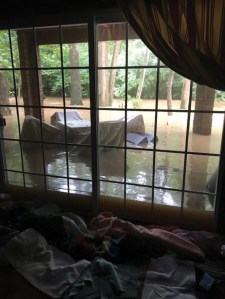 The view from Judy Zirt’s basement during a flood that damaged the basement of her Country Club Hills home. Photo submitted.

The Zirts weren’t the only Salisbury residents impacted by the late August flooding. Residents in the Wellington Hills subdivision had to be rescued by boat from their homes.

The city of Salisbury is currently using an online survey at salisburync.gov/StormwaterSurvey to collect information about flooding experiences like the one the Zirts had. The feedback from the survey, which will be live until the end of March, will be used by the city as it crafts a stormwater master plan.

The goal of the master plan, which the city has been working on for about a year, is to identify, prioritize and implement improvement projects to upgrade the stormwater system.

“We can look at it from a standpoint of what kind of calls we get and what areas we know have issues, but a lot of our stuff is generated from citizen calls or citizen concerns,” said Chris Tester, public works assistant director for Salisbury. “This is an additional way for those who haven’t reached out in the past to gather their information also to try to throw as big of a net as we can over the concerns in the city.”

Janet Pope, another resident of the Country Club Hills neighborhood, plans on submitting her own flooding experience for the survey. Pope also suffered home damage during the Aug. 31 storm.

When the rain was coming down in sheets that afternoon and water from the tributary of Grants Creek started marching toward her home, Pope moved one of her vehicles to safety on higher ground in the street. The other car in her driveway wasn’t so lucky. Pope couldn’t move it in time and the car took on so much water damage that it was eventually totaled.

The flood also wreaked havoc on her backyard, garage and basement, ruining family photos, books and caking everything in a thick layer of mud that took months to expunge. 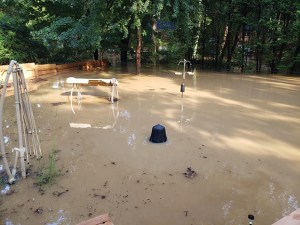 Pope said a representative from the city of Salisbury visited her home after the flooding event and is aware of what happened, but that she still plans on submitting her feedback. She is especially concerned about the accumulation of debris in the Grants Creek tributary and how that might lead to water buildup during storms.

The goal of the stormwater master plan, Tester said, isn’t to stop flooding events like what happened on Aug. 31. It’s to improve the stormwater system’s ability to handle major influxes of water and to keep waterways free of pollution.

“We’re not going to eliminate flooding by doing this,” Tester said. “There’s no way, shape or form that’s going to happen. Flooding will occur. This is to try to resolve issues and manage those issues and decrease the frequency of them, maybe.”

Tester said that the city is particularly looking for issues with the stormwater system that can be fixed efficiently, such as an undersized pipe system or an area where litter pollution builds up.

The city, Tester said, hopes to start the new fiscal year in July with a capital project improvement plan that will lay out what parts of the stormwater infrastructure need to be upgraded.

To access the survey, visit salisburync.gov/StormwaterSurvey. Residents can request a paper survey in English or Spanish by calling Damian Gaiski-Weitz at 704-338-6812.The deadline for completing the Stormwater Master Plan survey is March 31.

Salisbury is only gathering feedback on flooding from those who live within the city’s limits, but flooding issues extended throughout the county last year.

Having been drenched by 72.17 inches of rain in 2020, according to totals at the Mid-Carolina Regional Airport, Rowan County experienced its wettest year on record. The influx of rain resulted in high water levels that threatened homes throughout the county, from Spencer to Gold Hill.

During the same intense rains that nearly flooded Zirt’s home in November, Spencer resident Dale McCorkle watched water flood the ductwork under his home, rendering his HVAC system inoperable and leaving him without heat for weeks.

McCorkle lives in a neighborhood not far from the Yadkin River. His backyard runs into a small pond that is an oxbow (a U-shaped pond) that eventually flows into the Yadkin. The close proximity to the water is one of the reasons why McCorkle bought the house.

“We used to have to walk a quarter mile to get to this pond to hunt it and then when this house came up for sale we bought it,” McCorkle said. “I guess it’s a double-edged sword.”

McCorkle had flood insurance, which made a bad situation a little bit better. He bought the policy in early 2020 after water closed in on his home in January of last year.

Jean McCoy, who lives close to McCorkle and only about a half mile from the Yadkin River, didn’t experience as much flood damage as he did, but she still saw water encroach on her home.

McCoy has lived in her home for over two decades. When she purchased the property, it wasn’t in a flood plain. She said that changed about a decade ago when a new flood map was released.

“It did not get in my house, but it got in my yard and in my fence for the first time twice last year,” McCoy said. “I haven’t had the flood issues of some of my neighbors, but if it keeps going like this, then I could.”

The Piedmont Research Station has recorded 15.57 inches of rainfall this year. If that pace continues, the county will receive roughly 72 inches of rain this year, rivaling last year’s record amount.

Paul Johnston, who owns a tract of land in the Gold Hill area, not far from Second Dutch Creek, said the early November rain flooded most of his land as well. Parts of his property are located in a floodplain, he said. The water, which he said flooded 7 feet over one of the ponds, saturated his property for almost two days.

The county, he said, also has an alert system that people can sign up for to receive notifications to their mobile phones letting them know of incoming severe weather that could result in flooding. Those are the extent of the county’s flood prevention measures, he said. Muire said that he encourages people to avoid building in flood hazard areas.