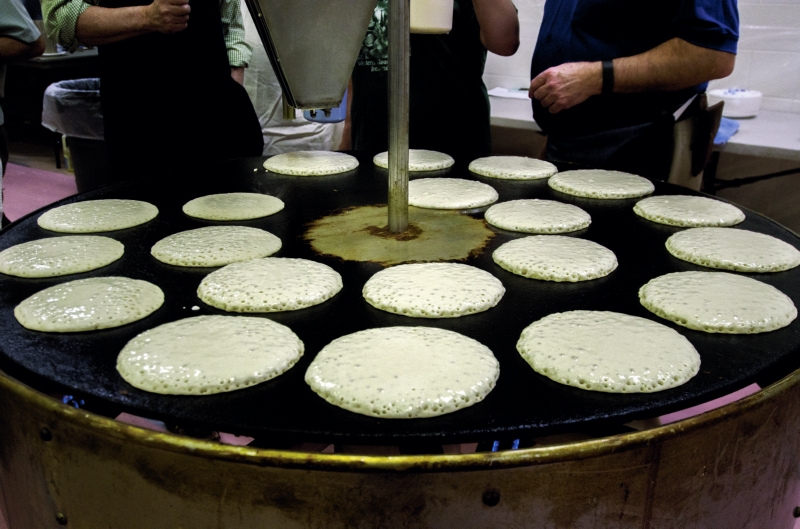 Pancakes cook on a large griddle at an earlier Kiwanis Pancake Festival at the J.F. Hurley Family YMCA. This year's event will be drive-thru, takeout orders only. File photo by Kristi Craven

SALISBURY — The Kiwanis Club of Salisbury is making some changes for its annual Pancake Festival.

This year, the festival will take place in a drive-thru format on Friday, April 16, and Saturday, April 17. It’s later in the year to allow for further improvement in COVID-19 cases.

There will not be any indoor seating and eating this year for health reasons.

The take-out Pancake Festival will be held at the J.F. Hurley Family Y Friday evening from 5 p.m. to 8 p.m. on April 16 and 8 a.m. to 11 a.m. on April 17. Tickets remain $5 per take-out container and can be obtained from sponsors, Kiwanis members, the YMCA Service Desk or on-site during the festival.

The club has designated this year’s festival in memory of Scott Robinson, past president and 33-year member, who died from an accident in January.

The Kiwanis Pancake Festival was started in 1957. Although take-out containers have always been available, this is the first, and hopefully only, year that the Kiwanis Club is hosting an entirely take-out event. The Pancake Festival is a major fundraising event for the club, with approximately $25,000 is raised. That money is used to fund the children’s charity projects of the club. Funds are generated from sponsorships, ticket sales and donations.