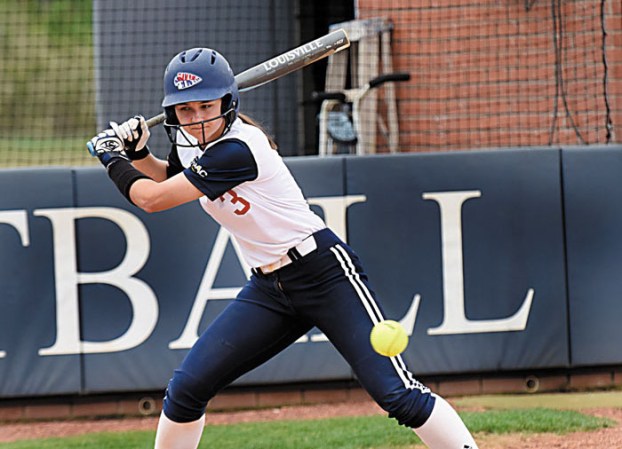 Catawba’s Jordan Dean at bat during a game against Anderson in 2019. photo by Wayne Hinshaw, for the Salisbury Post

College softball: So far, so good for Catawba

The lone loss for the Railsplitters came at Catawba’s Whitley Field on March 3.

“We played two really good games with LMU that could’ve gone either way,” Catawba head coach Mandy Harris-Morgan said. “Sure, we could have lost both, but we know we also could have won both. That was a big day for us. We proved we can play this game at a high level.”

The Indians’ only other loss came in a doubleheader split with an Anderson team that isn’t ranked, but did receive votes in the most recent national poll. Anderson is 18-4.

“Anderson is really strong,” Harris-Morgan said. “They should be ranked.”

Catawba is obviously strong, as well, but so is Lenoir-Rhyne. Carson-Newman is pounding softballs. That’s life in the SAC, where there are always at least a half-dozen stout squads. Just about every week the rest of this season is going to provide two challenging doubleheaders for Catawba.

Catawba was 32-33 in Harris-Morgan’s first two seasons, an unlucky 2019 and a COVID-shortened 2020. But her third team looks like one that can stay in the chase for conference honors and a regional berth. The pitching is deeper. The lineup is more powerful.

A key addition to the middle of the batting order has been freshman first baseman Brittany Ireland, who is hitting .370 with team highs of six homers and 21 RBIs.

But mostly the Indians are relying on experienced players who have developed and gotten better in the system.

“Part of our offensive improvement was having the opportunity to practice continuously in the fall months when some schools were not able to do that,” Harris-Morgan said. “We’ve used a lot of hitting drills and our players are getting the barrel into the zone quicker than they ever have. And we’ve talked a lot about making sure we get a good pitch to hit. When we do get that pitch to hit, we’re attacking it.”

The stats back that up. Catawba is averaging 7.3 runs per game, which ranks 25th nationally. Catawba is in the top 25 in homers and doubles per game, and with a team on-base percentage of .414, there usually are people on base in front of those doubles and homers. There’s a world of difference between the three-run homer and the solo shot.

Shortstop Jordan Dean is batting .345 with four homers and 19 RBIs. Outfielder Carlee Brawley, who normally plays one game in left and one game in right in the course of a doubleheader, is batting .379.

Center fielder Allie Baker, a former slapper from A.L. Brown, has transformed into a power hitter and has four homers and 14 RBIs.

“Allie is known for being super-fast, but she’s also super-strong in the weight room,” Harris-Morgan said. “She can mis-hit balls over the fence. Not many people can do that.”

Sydney Goertzen, who usually starts one game of a doubleheader, enjoyed an explosive weekend at Mars Hill and is batting .407. Lexi Bryant, who has been in the DP role for half of Catawba’s games, is batting .389.

Tucker’s bat hasn’t gotten hot yet, but there’s no doubt that it will, and she’s played a flawless third base.

“We’ve been pretty solid on defense,” Harris-Morgan said. “We’ve got a lot of speed in the outfield. Our pitchers are keeping the ball in the park, and as long as they do that, there’s a great chance that we’ll catch it.”

Exceptional offense and solid defense have supported a pitching staff with an ERA of 3.34. That ranks 85th nationally.

“She’s got the best changeup I’ve ever seen,” Harris-Morgan said. “Hitters go to the plate looking for it and they still can’t hit it.”

Summer Howerton is 3-0. Freshman Whitley Arnott, who starred at West Rowan, has overcome some elbow issues and is 2-1.

The amazing story as far as the pitching staff has been Brooke Walser, who was a senior last spring, but elected to play another softball season when college athletes were granted a universal redshirt option for COVID-plagued 2020.

Walser has plenty of experience and savvy and is 6-0 with a 3.27 ERA in eight starts.

“When we played Anderson, she worked her shift, slept three hours and headed to the ballfield,” Harris-Morgan said. “Then she pitched great and beat a great team.”

A fifth pitcher, Tucker, is waiting in the wings, as a potential weapon for down the road, but it’s been hard for Harris-Morgan to take her off third base.

The staff’s statistics aren’t spectacular when it comes to strikeouts and walks, but with stellar run support, wins have piled up and confidence has climbed.

The Indians have gotten the fast start they wanted. Now they just have to keep it going.

Life on the bubble: Brackets set for return of March Madness