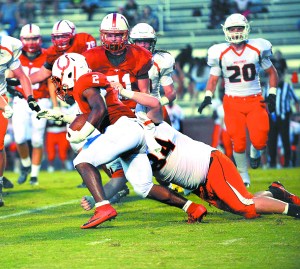 East Rowan back Sammy Pinckney. Photo by Wayne Hinshaw, for the Salisbury Post.

AVONDALE — East Rowan’s football team fell 21-6 at Thomas Jefferson Classical Academy on Friday in the first meeting of the programs.

The TJCA Gryphons (2-0), a strong 1A program that won three playoff games in 2019, took a 14-0 halftime lead on a rushing TD by QB Bryce Jergenson and a TD pass from Jergenson to Dakota Twitty, who evaded several tacklers to get to the end zone.

East (0-2) tried to mount a comeback in the second half and got a touchdown from Sammy Pinckney to get within 14-6.

East’s defense limited TJCA’s big running back Isiah McMullens to 76 yards on 17 carries and held the Gryphons to 51 passing yards..

Jergenson, a fast QB, did most of the damage with his legs. He broke a 40-yard scoring run with about two minutes left to put the game away. He rushed for 124 yards.

TJCA didn’t turn it over. The Mustangs lost one fumble.

Next for East is the start of North Piedmont Conference play against West Rowan, also 0-2 after non-conference play.