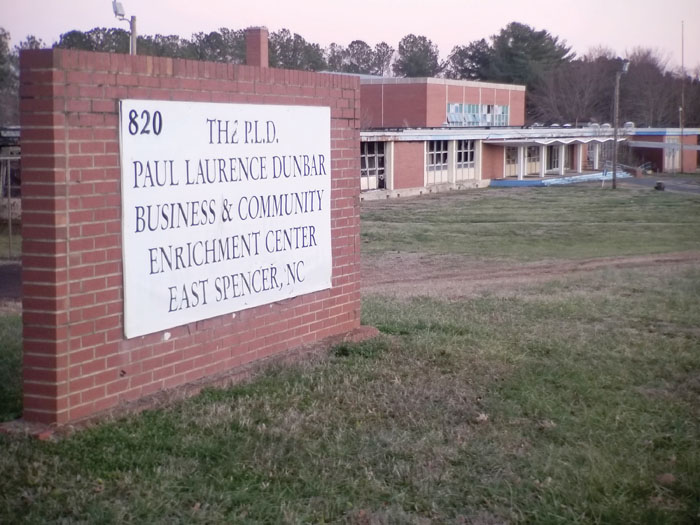 Josh Bergeron / Salisbury Post - On Long Street in East Spencer, The Paul Laurence Dunbar Business and Community Enrichment Center , which was heavily damaged in a December 2014 fire, remains abandoned, but a local group is making plans for redevelopment.

EAST SPENCER — Plans to convert the former site of the Dunbar High School and Dunbar Center in East Spencer into a multi-use development appear to be underway.

Called the Dunbar Village at East Spencer, the development is being heralded by its organizers as a community hub that will provide educational opportunities, internet and energy infrastructure, commercial retail and affordable housing.

Plans for the development have been percolating for several years, but have started to materialize in recent months. The development team behind the project recently presented its vision for Dunbar Village to community leaders at a Town of East Spencer work session last month.

The Dunbar Development Company, LLC, which owns the 7.4-acre footprint on which most of the former school and community center buildings stand, has partnered with Charlotte-based Diva Construction Company, LLC as co-developers on the project. The Paul L. Dunbar Community Foundation, led by former town mayor Kenneth Foxx Muhammad El, is also involved.

Antoine Smith, the co-chair and president of Diva Construction Company, said that they are anticipating a five-year timeline for the development to be completed, with progress starting soon.

Dunbar Village is being viewed by its organizers as a transformative step forward for East Spencer. The site of the development has been vacant since a 2014 fire damaged a large portion of the property, which housed the Paul Laurence Dunbar Community Center at the time. East Spencer leaders have long said that the empty site on South Long Street has left a hole in the community.

“It’s going to be an opportunity from an improved economic value perspective for East Spencer to finally sort of stand itself up and become an active participant in the Salisbury/Rowan County ecosystem,” Smith said.

The Essie Mae Kiser Foxx Charter School has been identified as an “anchor tenant” for the development. Smith said that the charter school is scheduled to move onto the site by this summer.

However, the school is currently appealing a decision made by the North Carolina Charter Schools Advisory Board in November to revoke its charter due to a failure to submit financial audits in 2019 and 2020. Dave Machado, director for the State Office of Charter Schools in North Carolina, said that a decision is expected today regarding the appeal.

If Essie Mae Kiser Foxx Charter School loses the appeal, it would be forced to either shut down at the end of the school year or lose funding from state and local taxes. The school could also appeal the decision in court.

“There’s no one piece that’s going to stop or negatively impact what we’re doing,” Foxx said. “The project is well thought out and well planned.”

In addition to housing an educational component, project leaders envision Dunbar Village serving as the home of a “network operating center” that would provide fiber-optic broadband internet infrastructure to service the East Spencer community.

“One of the key deliverables in the project would be a 21st century, future proof fiber infrastructure that is going to go directly into the footprint,” Smith said.

Smith said that developers will seek grant funding from the U.S. Department of Agriculture to build out the fiber infrastructure, which would be an “open access” network and give service providers the ability to offer internet to nearby residents.

“It’s an open-backboned infrastructure that would afford underserved communities to be able to get the same level of the benefits and features that an affluent community would get, but a third of the cost because it’s subsidized,” Smith said.

The fiber infrastructure would tie into the development’s larger purpose of being an educational center, Smith said.

“When you have that type of technology infrastructure, now we can create learning tracks for not only the students at the Essie Mae Kiser Foxx Charter School, but anyone that wants to come into the Dunbar Village at East Spencer,” Smith said. “We’re going to create workforce development and economic development trade skill programs at every level of the computer sciences.”

Developers plan on utilizing the existing buildings on the property for Dunbar Village, which they say will save them time and money.

“We are adapting a pre-existing footprint for a new purpose and are therefore (mitigating) a lot of the normal costs that a developer or a general construction management firm like myself would look at as higher risk,” Smith said.

Despite several buildings on the property still showing damage from the 2014 fire, Smith said that he estimates only a small percentage of the existing structure will have to be demolished.

“Probably only, I would say, of the total footprint, you might say 27-33% of one building that would be demolished,” Smith said. “The rest of everything else, it might need a little bit of inside finishing that might need to be stripped down to the stud, but overall, all of the buildings on the footprint are engineerily solid and sound.”

Smith said that parts of the existing structure only need a “little bit of lipstick and some T.L.C.”

Developers are also keen on purchasing the 6.6-acre tract of land adjacent to the school to include in the development.

To accomplish the ambitious, multi-faceted project, Dunbar Development Company and Diva Construction hope to enter into a public-private partnership with the town of East Spencer. Town Attorney Tom Brooke said that the development “looks like a good thing” for the community, but that only preliminary discussions have been conducted about joining a public-private partnership.

East Spencer Mayor Barbara Mallett said that the town is welcoming to any development that will help revitalize the community.

Foxx believes that Dunbar Village will be able to do exactly that.

“We’re very confident with the team we have in place that we’re able to not only put together the planning, but we feel good about executing and doing exactly what we say we can do,” Foxx said.