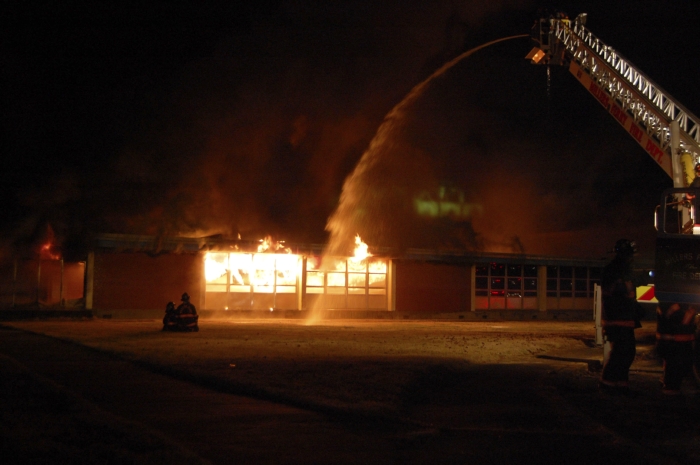 Firefighters spray water on flames as a fire rages in the Dunbar Center in East Spener Tuesday night. The building, which faces South Long Street, was engulfed in flames.

The building, which used to be a school and faces South Long Street, caught fire shortly before 8 p.m. Several fire departments were battling the fire, though it was clear the building couldn’t be saved.

Huge plumes of smoke rose from the building while fire hoses rained water down from the tops of ladders on ladder trucks.

Firefighters worked in teams to attach and detach hoses from pumper trucks being filled with water. Other firefighters walked along the edge of the building spraying water and smashing out windows.

How the fire started and whether anyone was inside the building when it began was unknown Tuesday night.

As the building burned, people watched from the sidewalk across Long Street and in the parking lot of a church. Some stood in the cold and others stayed in their cars.

The situation seemed quite calm, with the only loud nose coming from speakers as fire captains gave orders.

Deloris Foxx said she is an alum of the school from when it was all black students.

“It’s a shame,” she said as she watched the fire.

Debra Pearson said she went there from first through tenth grade before schools were integrated in the late 1960s.

She said she lives down the road from the center.

“It hurts” to watch, she said. adding she was sad to see her old school in flames.

Another man stood in the church parking lot, smoking a cigar and talking with other onlookers.

“Hurts my feelings,” he said.

The fire continued to burn after 9:30 p.m., and it was clear firefighters would be in for a long night. People gathered on the sidewalk in East Spencer to watch the fire in the Dunbar Center Tuesday night. The building used to be a school and several onlookers said they went to school there.

As year comes to a close, giving spikes