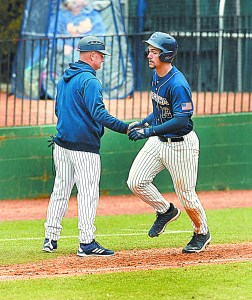 SALISBURY — After five hours of baseball on Sunday, Catawba was basically back where it started.

The Indians split another doubleheader with Carson-Newman and divided the four-game series at Newman Park, losing 9-5 before romping 12-2 in the nightcap.

For Carson-Newman (7-4, 2-2) to split with the seventh-ranked team in Division II on the road, the Eagles had to be pleased with the results.

That’s not a shock. Everyone knew the hitting would be ahead of the pitching, at least in the early stages of the season.

The pitching staff is loaded with veterans — and no one doubt that they’ll get it rolling.

In Sunday’s first game, a seven-run Carson-Newman fifth inning turned things around. Lee Poteat drove in three for the Indians, while Jeremy Simpson had two of Catawba’s seven hits.

Caleb Link (0-2) only pitched to one batter, but that one scored the run that put the Eagles ahead to stay.

Hunter Shepherd, who ran into trouble in the first game on the mound, made up for it by socking his fourth and fifth homers of the young season.

Maddux Holshouser (1-0) has been Catawba’s most effective starter in the early going. He worked six breezy innings with eight strikeouts.

Catawba is in fourth place in the South Atlantic Conference.

Coker, off to a 3-1 start and tied for second, visits Newman Park next weekend.