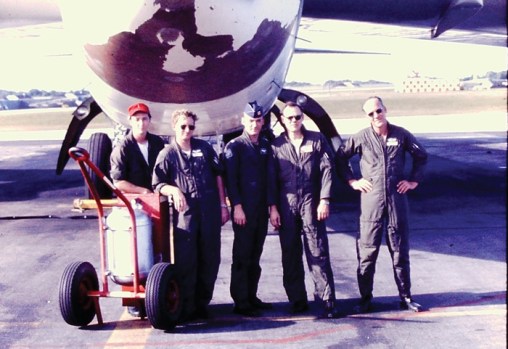 Major Frank Ramsey and his B-52 crew. Frank once wanted to be a B-52 gunner and he eventually commanded the whole plane. Submitted photo. 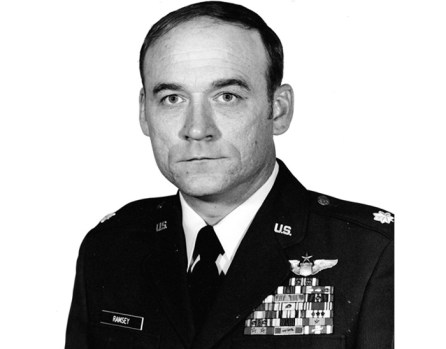 Major Frank Ramsey, near the end of 22 years in the United States Air Force. Submitted photo. 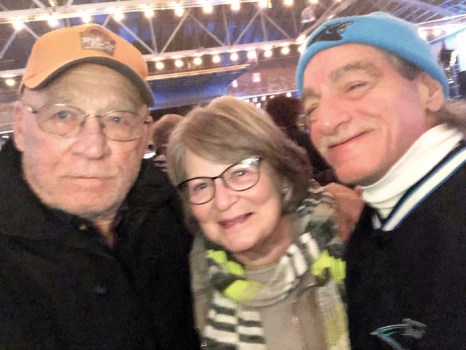 From left: Frank, Janis and Frank's son Jeffrey Ramsey at the Trolley Barn on New Year's 2019. Jeffrey is from Huntsville, Alabama, while Frank's daughter Gina lives in Alaska. Submitted photo.

Frank Ramsey thought Salisbury was a great place to grow up, with lots of activities for youngsters, like Little League and Pony League baseball. All the kids walked to school and they could roam almost anywhere. Boys loved playing war, digging foxholes and building booby traps in the woods. Ramsey said, “My favorite comic book was ‘Combat Kelly’ and every month I picked up Leatherneck magazine at the Marine recruiting office and that’s where I learned how to throw knives, hatchets and use fighting sticks.”

Ramsey said, “My mother was so against violence that she wouldn’t allow me to even watch wrestling on TV or play football. I wanted to play football but my mother wouldn’t buy me football shoes or shorts to play. I was so determined that I showed up the first day of freshman practice barefoot and in my jockey shorts! I think a lot of the things I’ve had to overcome were helped by the invaluable life lessons learned while playing for Coach Ludwig. He was tough, mean and unforgiving but he was a great coach! We won the state championship in 1958.”

Inducted into the N.C. Military Veterans Hall of Fame on Saturday, Feb. 20, Ramsey joined local veterans Kenny Hardin, Rodney Cress and Norris Dearmon, all previously honored in the Salisbury Post. The N.C. Hall of Fame now includes 69 veterans honored for their valor, service to the community or achievement. Ramsey was nominated for his valor and the following is a recap of his exceptional military career.

Excited about career opportunities, Ramsey chose the Air Force immediately after high school graduation. Basic training was split between Lackland and Lowry Air Force Bases and tech school followed, also at Lowry. Ramsey eventually wanted to be a B-52 gunner but never thought about being a pilot until he spotted a group of Rambo-looking guys wearing big knives and bandoleers of ammo. Ramsey found that the men were forward air controllers and decided he wanted to be one of them. Told that he had to get a college degree, an officer’s commission, succeed at pilot training and then be assigned to the right plane, Ramsey was sent to Airman’s Education and Commissioning Program at Auburn University. After graduation, he was too old for pilot training but finagled his way into that program anyway and was assigned to O-2 Skymaster planes, primarily used for FAC. Ramsey then became a forward air controller in Vietnam in 1970, seven years after the dream began.

In late May 1970, a company of the 51st ARVN Regiment became surrounded on a mountain top by a North Vietnamese regiment and suffered heavy losses. Air strikes were having minimal effects on the enemy. Lt. Ramsey volunteered to be helicoptered to their location and remained for the days and nights of June 3 and 4, while going on ground patrols to examine the enemy fortifications. As a result of his recommendations for targets and ordinance loads, the NVA attack was broken and the NVA regiment was annihilated with more than 200 NVA killed.

On June 7, while Ramsey directed these air strikes, a Marine F4 jet was shot down by heavy machine gun fire. The back seater ejected at low altitude and landed in the middle of the NVA regiment. Ramsey made low-level passes in his plane, despite intense and nearly continuous small arms and automatic weapons fire and found the downed crew member. He called in and directed helicopter gunships for strafing runs on the enemy positions. One helicopter attempting a pickup was hit by ground fire and was unable to make the pickup. During this time Ramsey made countless rocket passes, each time subject to heavy and aggressive fire, to prevent the enemy from reaching the downed crew member. Ramsey continued to coordinate the rescue efforts and keep the enemy away for one hour and 15 minutes until the rescue was completed. For his efforts this day, Ramsey was awarded the Distinguished Flying Cross for Heroism.

Ramsey, now a major, also was awarded two additional Distinguished Flying Crosses, one for a mission near Hanoi, North Vietnam in December 1972 as a B-52G commander when his aircraft was hit by a surface-to-air missile. Ramsey also received two Meritorious Service medals, 11 Air medals, the Air Force Commendation medal, the Vietnam Service medal with seven Bronze stars, The Republic of Vietnam Gallantry Cross with two gold stars and the Republic of Vietnam Gallantry Cross with Silver Star.

While still on active duty, Ramsey acquired the patent rights for a biomass fuel for the Southeast United States. He said, “I retired from the Air Force to shepherd this industry in the U.S.. My business failed horribly, so after that I went to work as a salesman for a financial planning concern that dealt with just commissioned officers in the military.”

Frank and wife, Janis, had a good time traveling Europe and most of the western U.S., including Alaska. In about 1986, Ramsey made his first hunting trip to Alaska which turned into a real survival adventure. He said, “I decided that this was the kind of lifestyle I would like, so I drew up a plan to retire to Alaska. Wrote it down, followed the plan and then, I think it was 2000, quit work and Janis and I took off to build our place in Alaska. My favorite things to do are fishing, hunting and any activity with the grandchildren.”

Janis has always wanted to live downtown someplace. Ramsey’s Boyden High School Class of 1959 has been holding a reunion every five years and many of them have stayed in contact. He said, “We’ve been going to those regularly, the people were great, and Janis fell in love with Salisbury and decided that we needed to have a place in Salisbury. About a year and a half ago, we rented an apartment and make the trip back several times a year to enjoy Salisbury.”

Ramsey summed his experiences, “My Air Force career of 22 years and life has had many twists and turns, but it seems every time something negative happened to me, it turns out to be positive.  I think I could write a book about all of those!”