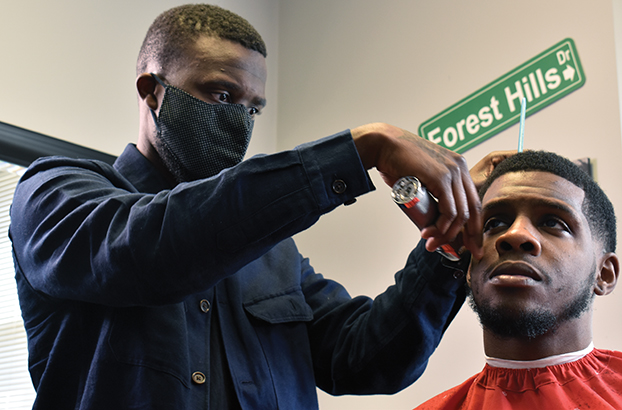 SALISBURY — As soon as the representative from the North Carolina Board of Barber Examiners walked in the shop, Daniel King got an uneasy feeling.

With his clippers in his hand and a client in the chair, King was doing something he’d done hundreds of times — giving a haircut. It was 2012 and he was working as an apprentice barber at B&B Expressions while going to school at nearby Livingstone College.

When King arrived at the shop that day after class, a line of customers was waiting. He did what was natural and started giving them haircuts.

“I went to the back door, opened the door and the car was gone,” King said. “It was out of my hands at that point.”

The representative let King finish the haircut, but took down his information and sent the other customers home. The gravity of the situation didn’t sink in for King until he received certified mail a week later.

“I was thinking it was something like a check or something like that and they wanted to make sure I got it, but it told me I had violated the laws of apprenticeship,” King said. “It was a shock.”

Unless he paid a fee of several hundred dollars, King would lose his license. As a college student, King didn’t have that much money readily available. His apprenticeship was revoked.

After that incident, it took King nine years and plenty of hard work to achieve his goal of becoming a professional barber.

In January, King, who also goes by the name “Smilezthabarber,” finally earned his registered barber license. He now gives cuts from his own suite at the recently opened Pure Vision Barber Studio at 126 N. Lee St. in downtown Salisbury. 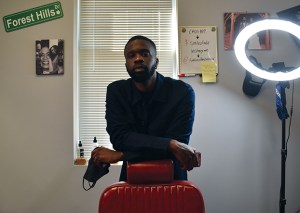 For King, earning his registered barber license was the realization of a dream he’d had since he was a kid watching his father style the hair of family members. Although his dad worked in a warehouse and drove trucks for a living, he was a mobile cosmetologist on the side.

“When I used to see him carrying his bag around, I would be interested in what he was doing,” King said.  “Anytime he’d leave it, I’d go open it up to peek in and see what was in there.”

His father also cut the hair of King and his brothers. One day, when his dad didn’t have the energy to give them a trim, King came up with a bright idea.

From that moment on, King got serious about cutting hair. When teachers at school asked him what he wanted to do, his response was quick and decisive.

“I told them I wanted to be a barber,” King said.

King’s first client, willing or not, was his younger brother Timothy.

“That’s where I tried designs and fades and shape-ups on my younger brother,” King said. “It was a trial and error. There were a few mess ups.”

King, who was also cutting his own hair, eventually started getting better. Soon, Timothy was asking him for haircuts instead of being coaxed into them.

Only a few months after graduating from North Rowan High School in 2010, King enrolled at the Winston-Salem Barber School and spent the next 10 months perfecting his skills.

He came back to East Spencer and started cutting hair with an apprentice license while working toward a criminal justice degree from Livingstone College, fulfilling another personal goal of becoming the first person in his family to graduate from college. King ran track and threw javelin for the Blue Bears while giving clients cuts at B&B Expressions in his spare time.

After losing his apprenticeship license in 2012, King cut hair in his dorm room at Livingstone and then for several years in the basement of his house in Granite Quarry.

All the while, King was planning on how he’d get his apprentice license back. The process seemed simple enough: he had to go to Raleigh or Fayetteville, pay a fee and take a written and demonstrative test. If he passed, he got the license back. But for King, the process was more complicated since he didn’t have a reliable form of transport.

“At one point, I didn’t have a car for years,” King said. “The second car I had was one my mom gave me when she got a new one. It was because she knew I was cutting people’s hair by going to their houses. When I didn’t have a car, I would ride my bike to people’s houses.”

He even walked to clients if they were close enough. But walking or biking two hours to take an exam? That didn’t seem possible to King. He would also have to bring with him a person whose hair he could cut, which proved difficult to arrange. 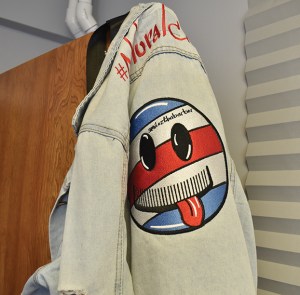 After coming up with the name “Smilezthabarber,” Daniel King had a logo designed by a local graphic artist and has used it ever since to promote his work. Ben Stansell/Salisbury Post

Despite the obstacles he faced, King didn’t give up on his dream. Even if he wanted to, his then-girlfriend and now wife, Destiny Stone, wouldn’t let him.

“I know there were many times where he wanted to quit,” said Stone, a singer who also teaches music at Knox Middle School. “I never wanted him to give up because he always knew he wanted to have his license again.”

King once again earned his apprentice license in 2019 and returned to work at B&B Expressions. Last August, King completed the required year of work under a registered barber and prepared to take the penultimate certification exam.

Due to COVID-19, he couldn’t get an exam date until Jan. 16. In non-pandemic times, King would’ve had to bring a “live model” whose hair he would cut. Instead, he had a mannequin in tow when he drove to Fayetteville to take the test.

A few days later, a letter came in the mail from the North Carolina Board of Barber Examiners. This time, it contained good news — he was officially a registered barber in North Carolina.

“It was a long time coming,” Stone said. “I’m so proud of him. It’s a great story about not giving up and persevering.”

King works alongside Dadrain Cuthbertson at Pure Vision Barber Studio. Now, as a registered barber, King won’t have to put down his clippers when Cuthbertson leaves the shop.