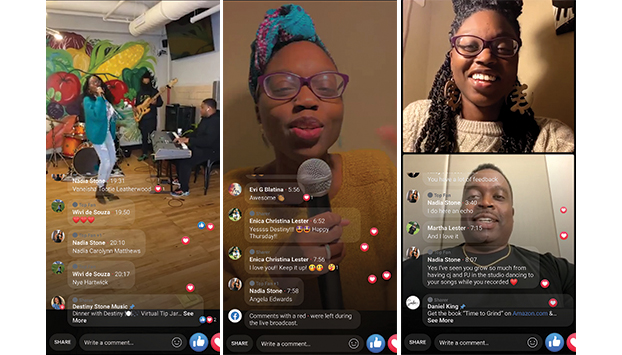 This screenshot shows Destiny Shone performing in Heart of Salisbury in downtown during a live-streamed event called ‘Dinner with Destiny’ as well as an impromtu live stream last week that produced a 30-minute performance and a discussion about her newest song after its release.

SALISBURY — The previous year hasn’t been easy for performers of any kind, but it’s been particularly tough for musicians and singers like Destiny Stone, who loves the thrill of  connecting in person with fans and friends.

“There nothing like being in a room with other people and be able to share that energy,” she says.

But Stone isn’t one to sulk. Wondering how she would continue to work toward her dream as the pandemic raged on, Stone says she decided to tap into social media, be proactive and not worry about publicizing her work. She created a strategic plan, turned to digital performances and live-streamed impromptu, laid-back sessions for fans and people who follow her Facebook page, Destiny Stone Music, which boasts more than 2,500 “likes” and about 2,900 followers.

“I got dolled up because I have a Zoom call, but I thought it started at 3 but it actually doesn’t start until 4. So, since I’m all cute, I figured I’d hop on here and show my face,” Stone said Thursday before diving into a 30-minute performance that received 1,100 views.

Now, she’s planning to have her second digital-only performance in March at the Pedal Factory — a colorful bicycle recyclery in Salisbury that allows people to work on bikes and earn one of their own.

Scheduled for March 27 at 8 p.m., the event is titled Soul Sisters and features two other female performers, Ashley and B Ashley B. Just like a normal performance, Stone is selling tickets, with $5.99 for early purchasers and $9.99 otherwise. Tickets can be purchased on destinystonemusic.com. 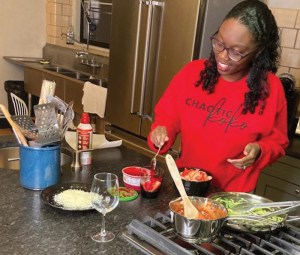 Submitted photo – Destiny Stone prepares food during a live-streamed event on Jan. 23. Stone is preparing for another live-streamed concert at the Pedal Factory called ‘Soul Sisters.’

Her first performance was titled “Dinner with Destiny” and took place at Heart of Salisbury — a multi-faceted venue in downtown Salisbury that features a full service kitchen and eating area. After cooking a meal, Stone performed with a band for 20 minutes. The event received dozens of likes and shares, as well as 1,200 views.

“I know we can’t see each other in person, but we are gonna make it work anyway,” she said to start of the event. “Facebook has become an awesome tool for me to share with you guys.”

Stone isn’t from Salisbury, but she’s made the area home after moving here from Holly Springs, a small town in northern Mississippi near Memphis, to attend Catawba College. She graduated in December 2018 and decided the area was a good spot to plant a musical career because it’s near three of the state’s biggest cities. After making friends and building relationships here, she also wasn’t particularly excited about returning home.

Her musical career was born shortly after she was. She has a number of musically inclined family members, including a maternal grandfather who was in a gospel quartet. She says the musical gene skipped her parents but found a home in her.

In elementary school, Stone and her brothers used a karaoke machine purchased by her grandpa to perform. One brother played the guitar. Another played the drums. Stone was on the piano. She recalls making cassette tapes to mail to family members.

Her musical talents were nurtured at the Mississippi School of the Arts, in Brookhaven, Mississippi. There in 2015, she held an album release party after making a CD, selling them for $10. Her first CD was recorded with the help of her aunt and a man who made local radio commercials, with all five songs recorded in one day.

“The production was very poor, but at the time I was just ecstatic,” she said.

Today, Stone teaches music at Knox Middle School after moving last year from an elementary school in Gastonia, which made for long, draining drives. She finds joy in teaching at Knox because it’s unlike traditional music options schools offer. Instead of students learning how to march in a band or sing in a chorus, Stone is teaching her class how to play the piano or keyboard — something many students may not be able to pay for otherwise.

“Literally, every aspect of my life involves music,” Stone says.

In her professional career, Stone draws on the inspiration of idols such as Nina Simone and India.Arie. Stone says her style of music and the messages she portrays are not “what’s cool.” She doesn’t make songs with a goal of getting them trending on TikTok, a popular social media platform for short videos.

Last year, she released a seven-song album titled “The Girl With the Purple Glasses” that she produced herself and with the help of her husband during the first months of the pandemic. She received a big assist from Anthony Johnson, a former Rowan-Salisbury Schools educator who now works for Apple. Johnson gifted Stone an old Apple desktop computer that she used to record her album.

“I was really proud of myself for that, just to continue to grow and tackle new things,” she said.

On a song titled “It Ain’t Easy” on her latest album, Stone sings:

“Do not take before you can learn how to give. Think before you speak on how your neighbors live. Be the change that we need in this crazy world. And don’t forget about all the Black boys and girls.”

Her latest album was released during the week that protests erupted across the United States after the death of George Floyd in Minneapolis. It was a strange feeling for Stone, who had submitted the album weeks ago and didn’t want to take attention way from the movement.

Her latest song is the single “Real Black,” which was released Jan. 1. She also recorded a music video for the song.

“Being Black has its challenges, but there is also so much beauty in being a Black person,” Stone said.