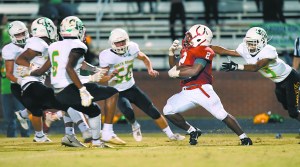 CONCORD — Mount Pleasant’s defense stood tall in the second half and the Tigers beat East Rowan 20-14 on Saturday in a game played on the turf field at Central Cabarrus.

East possessed the ball for almost three-quarters of the contest, but two interceptions, four fumbles and two blocked punts did in the Mustangs.

One bad minute in the second quarter turned the tide in a game in which the Mustangs looked sharp early.

It was a non-conference contest that East controlled for the first quarter and for much of the second quarter with the legs of Sammy Pinckney.

Besides lining up as a tailback or receiver, Pinckney took many snaps as a “Wildcat” and did most of the damage on a first-quarter drive that ended with his 1-yard scoring run, the 23rd touchdown of his career.

East went up 14-0 with 8:59 remaining in the second quarter on a short run by Josh Roman. Pinckney set up the TD with several big gains.

But then Mount Pleasant scored two touchdowns in a span of 55 seconds to turn it around. Both touchdowns came through the air. East turned it over between those touchdowns.

Pinckney had a few more gallops late in the first half to take East to the Mount Pleasant 24, but the Mustangs couldn’t get points. It was 14-all at halftime.

The decisive touchdown for the Tigers came on the ground with 8:50 left in the third quarter. It was a short-field drive for Mount Pleasant after an East punt was partially blocked.

East’s defense stopped the Tigers after that, so the Mustangs had their chances. They couldn’t cash in.

Mount Pleasant punted into East’s end zone with 6:17 left. East moved the chains twice, but couldn’t get a big play and advanced the ball only to the Mount Pleasant 49 before the Tigers intercepted a desperate pass in the closing seconds.

Ryan Tyson had a rushing touchdown and threw TD passes to Hank Allen and Max White to lead the Tigers.

Mount Pleasant had only 168 yards of offense, including 45 rushing yards.