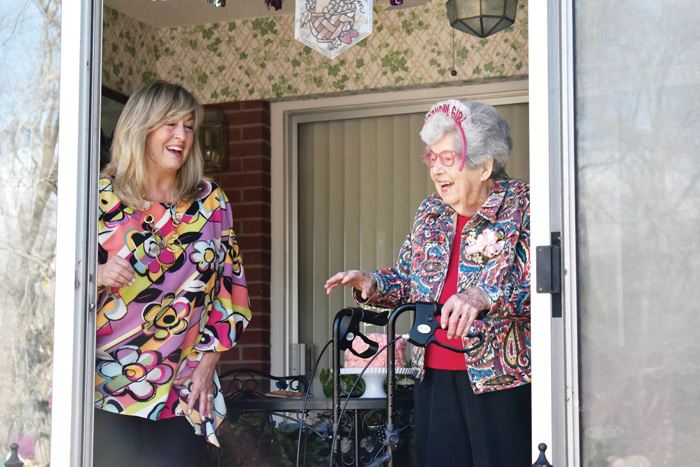 Elizabeth Lombard was surprised by dozens of her family members on her 100th birthday who gathered in her backyard to sing her happy birthday. Ben Stansell/Salisbury Post

ROCKWELL — Standing behind letters spelling out “Happy Birthday,” the members of Elizabeth Lombard’s family sang a familiar tune as she watched with a smile on her face from her back porch.

More than 30 of Lombard’s family members traveled from as far away as Kentucky and as close as Stokes Ferry Road to surprise her on Sunday afternoon for her 100th birthday.

“This is a very special day and a surprise,” Lombard said. “It’s been wonderful. It started yesterday and it’s lasted through today. I don’t know how it could be better than this. I’ve had such a good time.”

To be as COVID-19 safe as possible, family members gathered unbeknownst to Lombard in her sunny backyard in Rockwell before singing happy birthday and giving the centenarian their well-wishes.

“We have such a good close family,” Lombard said. “It’s wonderful and nearly everyone is here today. I appreciate them coming so much.”

Suzie Hunsaker helped organize and facilitate her great aunt’s birthday celebration because of all the times that Lombard has been there for her. 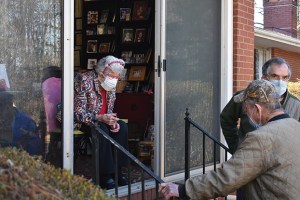 “I lived in Gastonia and when I was in labor with both of my kids, she drove from Rockwell to Gastonia, sat with me and took me to the hospital both times,” Hunsaker said.

Having delivered about 3,000 babies as a doctor and nurse, Lombard was familiar with the delivery process. Known by many in Rockwell as “Dr. Libby,” Lombard cared for the town’s residents and was a fixture in the community during her 50-year medical career. Although Lombard’s daily practice was located in Rockwell, she was called to the Rowan Medical Center on an almost daily basis to deliver babies.

No matter when she was called to help with a birth, Lombard would go — even if it meant putting off a trip to the lake.

“We would be on our way to church camp meeting at Lake Junaluska and she might get stuck delivering a baby,” said Libby Dunn, Lombard’s niece. “I can remember one time we were there for like eight hours. I was in the doctor’s library at the hospital waiting on her to deliver the baby, for the baby to come, and she would come in the library and tell me ‘It’s not quite time yet.’”

Dunn, who is Lombard’s namesake and is referred to by some family members as “Little Libby,” was used to medical emergencies interrupting the fun she was having with her aunt. 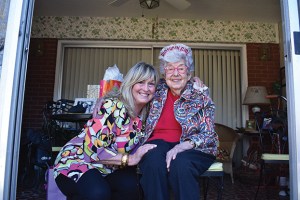 Libby Dunn, known as “Little Libby” by most in her family, hugs her aunt and namesake Elizabeth “Aunt Libby” Lombard. Ben Stansell/Salisbury Post

Dunn grew up less than one mile from Lombard and spent almost every weekend at her aunt’s house. Being a member of Seventh Day Adventist Church, Lombard took Dunn to church with her on Saturday morning and then the two spent the rest of the day playing games together. Many times, Lombard would get calls that disrupted their games or their sleep.

“People would call in the middle of the night and, if I was there, I would have to go with her,” Dunn said. “I would just ride with her. I remember standing in the front seat next to her going on the house calls.”

Lombard kept chains on her car’s tires in the winter, Lombard said, because she never knew when she would have to drive on icy roads to get to a patient or a delivery.

Dunn said that the constant house calls were an annoyance for her at the time, but now she looks back on them differently.

“I was very, very proud of her because she was a lady doctor back when there were not lady doctors,” Dunn said.

Trained as a registered nurse at Erlanger Hospital in Chattanooga, Tennessee, Lombard started her medical career by working for her brother-in-law, Dr. Joseph Oliver, at his practice in Rockwell in 1940. After six years as Oliver’s nurse, Lombard returned to school and eventually earned her doctorate from Loma Linda University School of Medicine in California, where she was one of only five women in her 92-person class.

Lombard returned to Rockwell in 1954 and opened her own practice, where she saw patients up until her retirement in 2004. Lombard’s office, with its signature ticking cat clocks, was a place where her patients felt at home. When Lombard was called to Rowan Medical Center to deliver a baby, her patients didn’t mind.

“Everything stopped when she was gone when she had to go deliver so-and-so’s baby,” Dunn said. “The people who were her patients understood because likely she delivered their children.”

Lombard said one of her greatest career accomplishments was assisting with the first hip replacement surgery at what was Rowan Memorial Hospital. Lombard is also proud of the role she played in helping preserve the placenta from a delivery at Rowan Memorial Hospital that was eventually used in the world’s first cord blood transplant that saved the life of Matthew Farrow in 1988.

“People in the community love her and she made a difference in a lot of people’s lives because she was sympathetic and she knew what she was doing,” said Joe Oliver Jr., who traveled from Midway, Kentucky to be at Lombard’s birthday surprise on Sunday.

Hunsaker remembers spending time at Lombard’s medical office, where her great aunt played tricks on her in between appointments.

“I remember being at the old office, probably elementary school age and getting on the scale and weighing a lot more than I thought I should,” Hunsaker said. “She had her foot on the back of the scale. Not quite devilish, but she had a good sense of humor.”

Lombard’s “wicked” sense of humor, Hunsaker said, may be one secret to her vitality.

Although Lombard recently quit driving, she drove herself to her 99th birthday luncheon with Hunsaker last year. Family members describe her as “sharp” and one said that they still call Lombard when they’ve forgotten a name that she might know.

Another factor in Lombard’s longevity could be her healthy diet. As a Seventh Day Adventist, Lombard has always eaten well and hasn’t smoked or drank much, if at all. That didn’t mean she doesn’t know how to have fun.

Dunn remembers Lombard shepherding all of her many nieces and nephews — Lombard is one of seven siblings — into her Lincoln car and taking them on picnics or on trips to the beach, one of her favorite places.

“She would gather a carload of us nieces and nephews and take us places,” Dunn said. “The picnics on Saturday afternoons were probably one of my favorite things.”

Hunsaker describes Lombard as the backbone and matriarch of the family, someone who is always looking out for them.

When Hunsaker’s mother died when she was in the eight grade, Lombard was there for her.

“I didn’t have a dress to wear to the funeral, so she gave my cousin Billy her credit card and we went to Zimmerman’s,” Hunsaker said. “He took me shopping to buy a dress, three pairs of Jordache jeans, which were a big deal in 1983 and a rabbit fur coat, all on her credit card.” 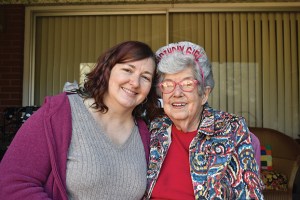 Lombard never had children of her own, but she said that her nieces and nephews are more than enough for her.

“They’re just like my children almost,” Lombard said. They’re so good to me. I love them and I’ve always loved them.”

Many of those nieces and nephews were in attendance for the surprise celebration on Sunday.

During the surprise celebration, Dunn gave Lombard a hand when she was trying to sit down in a chair on her porch, helping the woman who has helped so many others throughout her life.

Lombard had another reason to celebrate on Sunday. She will soon receive her second dose of the COVID-19 vaccine.