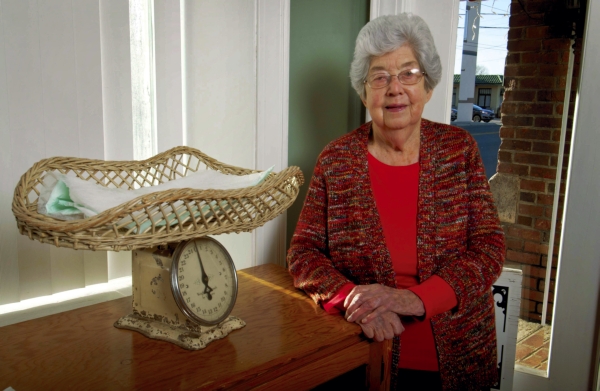 JON C. LAKEY / SALISBURY POST Dr. Elizabeth Lombard delivered 3,000 babies during her medical career. Her last delivery was in 1983. Lombard recently donated her infant scale to the Rockwell museum. The old wicker basket topped scale has measured the weight of thousands of children from Rowan, Stanly and Cabarrus counties at the Rockwell doctor office where Dr. J. A. Oliver and Elizabeth Lombard practice medicine. Wednesday, January 13, 2016, in Rockwell, N.C.

ROCKWELL — It still seems to happen every week, whether she’s filling up her car with gas or walking down an aisle at the grocery store.

People will walk up to Dr. Elizabeth Lombard and let her know that in her days as a family doctor, she brought them into the world. You can understand if Lombard doesn’t recognize most of those who greet her.

By her count, she delivered about 3,000 babies.

But Lombard places the names and faces of her former patients quickly once she asks a few questions, usually about who their parents were.

“It makes you feel good,” Lombard said of her lasting celebrity in eastern Rowan County and parts of Cabarrus and Stanly counties.

Not long ago, Lombard — her patients sometimes called her “Dr. Libby” — donated a baby scales to the Rockwell Museum. Jean Puckett, president of the Rockwell Historical Association and curator for the museum, has put it in a high-traffic spot near the front door.

It includes a handwritten note from Dr. Libby written on an old prescription pad.

Lombard likes to make it clear that these were not the scales used immediately after delivery. These scales, which have a wicker basket on top and go up to 25 pounds, were the scales used when the babies came into the doctor’s office for their first checkups after they were born.

“I thought maybe the people who used the scales would appreciate it,” Lombard says of her donation to the museum.

“A lot of people have noticed that scales,” Puckett says.

Puckett’s own two sons, long grown, were delivered by Lombard and no doubt weighed on the instrument.

They already had relocated to Huntersville when a drug salesman told Oliver Rockwell needed a family doctor. In 1935, Oliver ended up locating in an office next to the old Rockwell Pharmacy, then later moved to the stone house (across from today’s Variety Produce) on West Main Street.

Meanwhile, Elizabeth Lombard took her registered nurse’s training at Erlanger Hospital in Chattanooga, Tenn., and relocated to Rockwell to be with her sister in 1940 and also serve as Oliver’s nurse.

Others in the Lombard family would follow Ruth to North Carolina. Libby’s younger brother Will Lombard graduated from Rockwell High in 1943, served in World War II, and after trying his hand in funeral service for awhile, attended pharmacy school and ended up operating Crescent Pharmacy in Rockwell for some 50 years.

After six years as Oliver’s nurse, Elizabeth Lombard decided to return to school to earn her bachelor’s degree in nursing at Columbia Union College in Silver Springs, Md. During her second year back at school, Dr. Oliver told Lombard she should consider going on to medical school. He thought Rockwell could use an extra family doctor.

Lombard wasn’t sure. A lot of men were coming home from the war, going back to school and getting into the medical field. A low percentage of women were even being accepted into medical school, so she was surprised, thrilled and maybe a bit scared when the Loma Linda University School of Medicine in California accepted her application.

Of 92 people in her class, only five were women.

“I talked to her on the phone last week,” Lombard says.

Lombard never met any real resistance from her patients because she was a woman. In fact, she was embraced by the community.

“I was accepted very well,” she says, “because I had been here those six years prior.”

Lombard remembers thinking at the time she might be able to fill a need, and she was right. Sometimes women will go to a women physician when they won’t go to a male one, Lombard says.

Ask Lombard her favorite part of medicine, and she will tell you it was probably obstetrics and all those babies. Then there’s a hint of clarification.

“I liked it all,” she says. “It was a privilege being a family doctor, but I liked delivering babies the best.”

Most of those deliveries happened at Rowan Memorial Hospital. She delivered her last baby in 1983, but she continued practicing medicine full-time until her retirement in December 2004.

Because she is a Seventh Day Adventist, Lombard would not have Saturday office hours until sundown, then often would work until 11 p.m. or midnight before coming back with a full day of Sunday hours.

In late 1982, she moved her office to a new Rockwell Medical Clinic at 316 E. Main St., and her brother Will’s Crescent Pharmacy was right next door. Rowan Memorial Hospital bought the clinic in 1995, but not Dr. Libby’s practice.

For close to 40 years as a family doctor, Lombard was assisted by nurse Sarah Shue Catlett, who has passed away. Margie Hoover also was her longtime business/insurance secretary.

Lombard never married, but she has many nieces and nephews. In fact, she delivered about 10 of them. “That’s not ethical now,” she adds.

Through the years, Lombard also came to love her thousands of patients.

“You miss them because they become like family,” she says. “I hated to leave them.”

It’s hard to believe, but Lombard is coming up on her 95th birthday in February. A birthday party, open to the community, is planned for her from 2-3:30 p.m. Feb. 21, a Sunday, at St. James Lutheran Church’s fellowship hall in Rockwell.

In retirement, Lombard has traveled a bit, done a lot of reading and tended to her flower and vegetable gardens.

She is walking with a cane, only because she recently dropped something on one of her feet.

“It was anything but boring,” Lombard says of her long career. “I would not have wanted to go anywhere else, and there’s nothing I would have rather done.”

Weigh her life’s work, and it tips any scale.