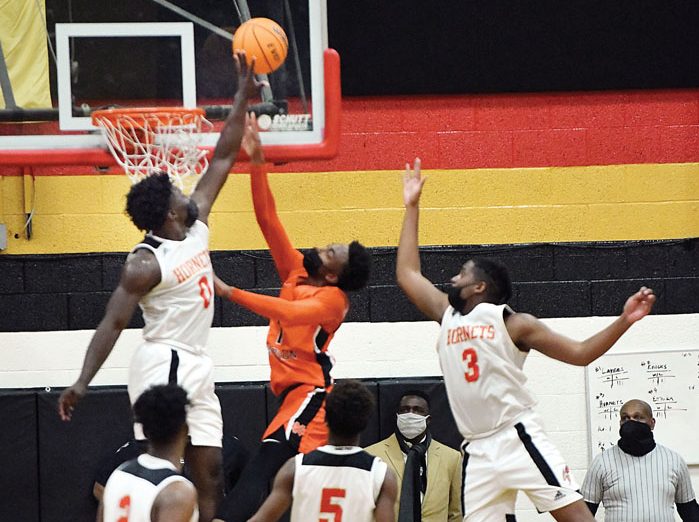 SALISBURY —  It was physical, gritty and hard-nosed, a typical Salisbury boys basketball game.

But for the first time in Central Carolina Conference play, a team was able to match the Hornets’ tenacity, resolve and toughness.

North Davidson pulled away late to beat Salisbury 52-45  on Tuesday in the Hornets’ gym to take the CCC title.

“Lots of credit to Salisbury and Coach (Bryan) Withers,” North Davidson coach Josh Snyder said. “They were disciplined and well-coached and they made us work for everything. But our guys were prepared for this. They did a good job in practice and did a good job of studying film of Salisbury’s scorers.”

Both teams were held to season-low point totals in a game where only grown men finished at the rim.  Bodies crunched and bodies flew.

“Jalon is a unique specimen, plus he works really hard,” Snyder said. “He caused some problems, but our inside guys didn’t back down. They battled him.”

A key factor was icy shooting by the Hornets (8-4, 8-1), especially 3-point marksman Cameron Stout and Nate Brown, who normally is money when he catches the ball or collects an offensive rebound in the paint.

“We got the shots we wanted to get, shots we normally make,” Withers said. “We just didn’t shoot it.”

Another key factor was a return to action by North Davidson’s Tedric Jenkins, who had been out for a few weeks. His 15 points were pivotal. He rebounded, handled the ball and got to the foul line.

“He shook off the rust and was a spark plug for us,” Snyder said.

Another negative for the Hornets was foul trouble for freshman guard Mike Geter, who was aggressive on both ends of the floor early. He was the guy Salisbury wanted to defend North Davidson superstar Jamarien Dalton at least half the game, but Dalton’s quick bursts to the hoop got Jeter in foul trouble. Geter had to sit down a lot and eventually fouled out.

“That might have been the biggest factor of all in us not getting this one,” Withers said. “We needed Mike’s quickness and he was scoring well tonight. He and Deuce (Walker) are freshmen, but they’re dogs. They get after it.”

Salisbury, mostly Geter and Joe Witherspoon who could play off Dalton a bit with his length, limited Dalton to 23 hard-earned points, a figure the Hornets could live with.

The Hornets started with emotion and went up 14-8 after a fierce Walker stickback and a Geter drive. They still led by four after a quarter.

But points were tougher to come by for the home team in the second quarter. The Black Knights caught up 20-all on a two-handed flush by Dalton, an Elon football signee, and inched ahead 25-24 at halftime.

Joe Witherspoon kept Salisbury afloat in the third quarter, scoring on scoops, floaters, jumpers and transition layups. Witherspoon had 10 in the period. Geter made a 3-pointer for 38-all, and the teams braced for the final eight minutes.

When Jenkins and Mason Everhart got the first points of the fourth quarter, the Black Knights finally had more than a one-possession lead.

And Salisbury fell into a dismal offensive lull.

With 4:24 left, guard Javon Smith, who is playing despite a knee injury that sidelined him for weeks, rebounded a missed 3-pointer by Stout and stuck it back in as he was fouled. His free throw cut Salisbury’s deficit to a single point, but that was the last glimmer of hope for the Hornets.

Salisbury just kept missing. Smith’s and-one would be the only field goal the Hornets made in the final quarter. North Davidson connected in more free throws and eased away for the 52-45 final.

“Big win for us in a challenging game,” Snyder said. “Their Senior Night. That’s a tough environment to win in.”

Witherspoon scored 12 for the Hornets, while Geter had 11. Smith added nine. Stout and Brown, both of whom average double figures, got only nine between them.

“I think our offense has only really clicked in a couple of games this year,” Withers said. “But we can defend. Our defensive effort gave us a chance tonight.”

Both teams move on to the 2A state playoffs now. Both figure to be tough outs.

“Now it comes down to who can play the best for two weeks,” Withers said. “I think we’re where we need to be. We just have to shoot it better.”