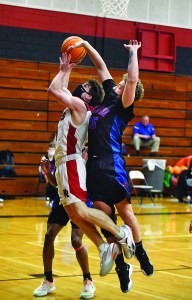 LEXINGTON — Cory Casilac has been tough for South Rowan to stop on the football field or in the gym.

Casilac, who scored 12 touchdowns for Central Davidson in the fall of 2019, led a 61-42 basketball victory over the Raiders on Tuesday with 15 points.

“Great effort, but we lack the game experience to adjust as quickly as I like, and, unfortunately, we can’t get much more experience this year,” South head coach Daniel Blevins said.

Ritchie enjoyed his best scoring game of the season.

Luke Staten added 10 points for the Spartans (7-4, 5-3), the fourth-place team in the Central Carolina Conference.

“I thought we did very well in the first half handling their full-court pressure and keeping the pace of the game where we wanted,” Blevins said. “To end the second quarter we had our struggles scoring and it spilled over after the half.  We forced some plays in the third quarter and got into a hole that we never recovered from.”

South is scheduled to finish the regular season Friday at home with Salisbury visiting.  Central Davidson is at West Davidson.