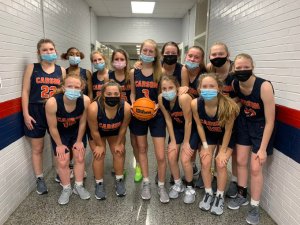 Colbie Perry (with ball) and her teammates.

She didn’t keep fans in suspense on Tuesday night. She got them in the first quarter of Carson’s 73-29 North Piedmont Conference win at East Rowan.

“We actually had a pretty good start to the game,” East head coach Kevin Holland said. “But Colbie had a great start.”

Perry made five 3-pointers and a layup in the first quarter.

“She was very hot early, and it was a really special way to reach such a milestone,” Carson head coach Brooke Stouder said.

Holland said the Mustangs brought terrific energy to the first half, but Carson is good enough to knock the excitement right out of you.

“We played very hard in that first half,” Holland said. “But Carson can do so many things. It’s hard to prepare for a team like that when you’re practicing with seven or eight.”

East (1-7, 0-6) welcomed Peyton Whicker back this week, but three other players are sidelined.

Colbie Perry had six steals and finished 6-for-11 on 3-pointers for a career-best 22 points.

Ellie Wilhelm shot 4-for-5 on 3-pointers and scored 12. Mary Spry shot 6-for-8 for 12 points. Hannah Isley got her nine points on 4-for-5 shooting. Carson’s starters didn’t miss very often.

Lani Isley had four steals. Carleigh Perry had six rebounds for the Cougars, who are ranked fifth in 3A by MaxPreps.

“We didn’t play as hard or with as much energy in the second half,” Holland said. “But if  we can play the rest of the way the way we did in the first half, we’ll be OK.”

Stories on 1,000-point scorers Colbie Perry and Hannah Wilkerson (North Rowan) are upcoming. Wilkerson, who reached 1,000 on the road at Thomasville last week, will be honored at North on Wednesday.