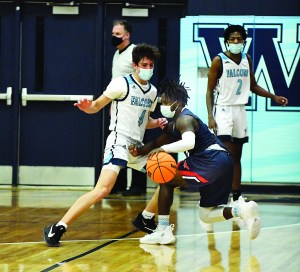 East’s Sammy Pinckney had a career game on Tuesday with 18 points. Photo by Wayne Hinshaw, for the Salisbury Post

Carson’s execution of that scheme was actually pretty good. East made only four 3-pointers in the North Piedmont Conference contest and Dylan Valley, the Mustangs’ most prolific 3-point marksman didn’t make any.

But the Mustangs found other ways to win.

They beat Carson 65-49 with 2-point buckets and with scoring from guys who don’t normally pile up points.

Sammy Pinckney scored a career-best 18 points for the Mustangs, while Landon Shuping careered with 16. Both of those players came in averaging under 5 points per game.

“Pinckney and Shuping killed us,” Carson head coach Brian Perry said. “They were more aggressive offensively than we anticipated tonight. And Vincent Jones hurt us on the boards.”

Jones matched his season high with 16 points and had eight rebounds.

Now the Mustangs have a serious shot at their first winning conference record since the 2011-12 season when they were 7-5 in the North Piedmont Conference.

Emory Taylor made six 3-pointers for the Cougars and scored 20, although four of those 3s came in the fourth quarter after East had the game well in hand.

AJ Merriman got in early foul trouble and didn’t score. He’s been one of Carson’s leaders.

“Emory got hot in the fourth quarter and made things more respectable, but most of the night we just couldn’t find any way to score,” Perry said.

East rallied and won in overtime in the game played at Carson.