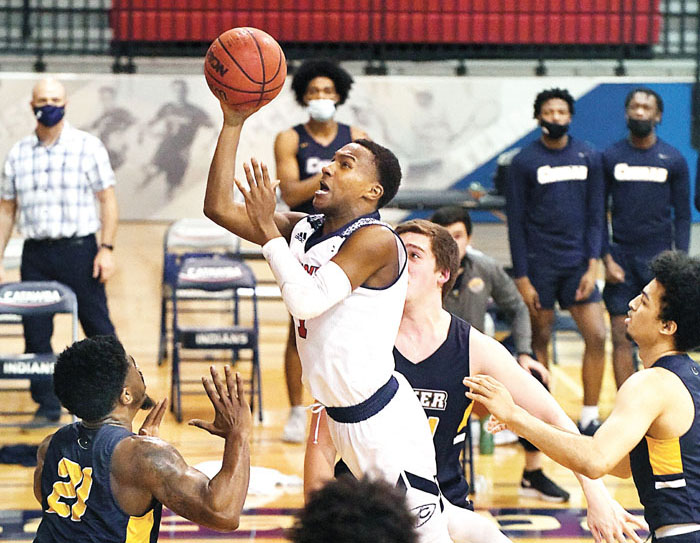 But Burwell, a touted Division I transfer, had that look in his eye. It wasn’t a look that said it was over.

And it wasn’t over. Somehow Catawba prevailed 85-79 in overtime on Monday night in South Atlantic Conference action staged in mostly empty Goodman Gym.

“I didn’t want to lose,” said Burwell. “I’m telling guys to just stay calm that last minute of regulation, to keep their heads up. I’m telling them that we’ve got this.”

Burwell practiced what he preached. He drove and scored, and the deficit was 69-65 with 20 seconds left in regulation.

“I’m really better as a fullcourt player than in the halfcourt,” Burwell said. “But tonight we had to get it done in the halfcourt, and I had the mindset that no one could stay in front of me. I wasn’t making 3s tonight, so I was going to try to get to the rim every time.”

Burwell is awfully quick, can change directions without slowing down at all. He can also make free throws. He was 11-for-12 at the stripe for a major portion of his 24 points.

“He’s a really good player who can be one of the best in our league, but he sprained an ankle in our second game and then he was down for a month with the COVID quarantine,” Catawba head coach Rob Perron said. “When he gets his legs under him, watch out.”

With 17 seconds left, the visiting Cobras turned it over. Terrence Whitfield didn’t have a great shooting game, but he kept working for 15 critical points. He stepped to the foul line and made two free throws with 16 seconds left, and the Indians were down two.

With 12 seconds left, the Indians had to put Coker on the line. A one-and-one was missed, Whitfield grabbed the rebound, and the Indians were on the attack again. Burwell was a blur. He drove, got fouled, made two clutch free throws with four seconds left. One defensive stop later, Catawba had made it to overtime.

Sky-walking Larry McLeod soared high for a putback to get the OT session started, and everyone took a deep breath. Catawba never trailed in OT.

But the testing, challenging moments were in that last minute of regulation when the game looked hopelessly lost.

“This was actually the third time we’ve come back and won a game like that,” Perron said. “Fortunately, we’ve got a very good press at the end of games. A lot of guys made plays.”

Todd Burt, a 6-foot-8 youngster who’s been struggling to seize his share of minutes, was amazing at the end. He totaled seven points, six blocks and five rebounds in just 11 minutes of court time.

Burt has the wingspan of a pterodactyl. He blocks shots guys don’t think he has any chance to get to.

“Athletically Burt has got it, and as far as being really long, he’s got it,” Perron said. “It’s just a matter of him gaining confidence.”

Catawba had a heck of a time getting started. The Indians (4-5, 4-5) didn’t score the first four minutes.

Carter Phillips kept Catawba afloat in the first half with 4-for-4 3-point shooting, and the Indians staggered to halftime with a 34-32 lead.

Catawba appeared to be in solid shape with 4:53 remaining in regulation when Burwell made his only 3-pointer for a 56-49 lead, but the Indians were shaky and careless over the next three minutes. At the 1:25 mark, they were down seven and in big-time trouble. They barely made it back to break-even, 69-all at the end of regulation.

Hard-driving guard Chandler Lindsey poured in 33 for Coker (4-8,4-8), but the Indians managed to survive his onslaught.

McLeod can be spectacular, but he was more efficient than spectacular in this one. He totaled 18 points on 8-for-11 shooting. He took what defenders gave him.

Catawba shot 87 percent (20-for-23) from the foul line thanks to Burwell and also to Burt, who was 5-for-5. Free-throw accuracy helped the Indians win despite being outrebounded by a much smaller team and losing the turnover battle.

Catawba defended the 3-point line well against  team that relies on the 3. Coker was 9-for-32 from long range.

Catawba has won 13 of 16 against Coker all-time and has still never lost to the Cobras at Goodman Gym.

The Indians probably should have dropped this one. Burwell just wouldn’t let that happen.

“I’m a rhythm player,” Burwell added. “I’ve had to start over twice this season, but now I’m hoping to be consistent.”

Catawba is scheduled to play at UVa-Wise on Wednesday and at Carson-Newman on Saturday.

“We’ve got an NBA schedule ahead of us,” Perron said.