High school basketball: Salisbury boys get it done with one good quarter 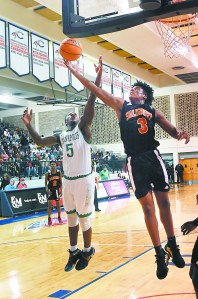 Salisbury’s Nate Brown has been a force for a while and scored 10 in the fourth quarter on Friday.  Photo by Wayne Hinshaw for the Salisbury Post.

The alarm clock finally went off in the fourth quarter, and the Hornets subdued Oak Grove for a 57-39 Central Carolina Conference win.

Cameron Stout kept the Hornets’ heads above water through some tough times with three 3-pointers and 7-for-14 shooting for 17 points. Nate Brown got 10 of his 15 in the fourth quarter.

It was more difficult than the final score sounds. The Hornets (5-3, 5-0) trailed by as many as seven points in the first half and were only up five going to the fourth quarter. That’s when they decided to take care of business, out-muscling and over-powering the visitors by making good use of much thicker bodies.

“We weren’t ready to play, and I could see it in warmups, which is when I started yelling at them,” Withers said. “Then I had to bench the starters in the first quarter because we still weren’t ready to play. Jalon Walker comes in the locker room at halftime and says, ‘Guys, we’re not playing,’ and Jalon was right.”

Salisbury stumbled to halftime in a 25-all tie, and knew it was lucky to be even.

The third quarter wasn’t easy to watch. Salisbury was brutal offensively, but on the defensive end, the Hornets did what they had to. Stop after stop. The Grizzlies (2-5, 2-3) got just two points in the period. Salisbury managed seven.

“We are offensively challenged,” Withers said.  “But we can grind. We can defend.”

The Hornets led by two with seven minutes left when Stout nailed a critical 3-pointer from the right side. Freshman guard Deuce Walker got the ball to Brown for an easy one, and then Brown hit the offensive glass to score again. Then quick freshman guard Mike Geter got to the rim for a three-point play.

Next, Jalon Walker, the acclaimed football prospect, took over athletically for a few minutes, blocking shots, getting every rebound and adding a couple of stickbacks. He scattered bodies in all directions and jumped a foot higher than everyone else. Suddenly, the Hornets were up 15, and it was over.

“Engaged” is the popular coachspeak these days, In the fourth quarter, the Hornets were engaged.

Salisbury, which has won its last five games, had a 34-18 edge in points in the paint and a 15-7 advantage in offensive rebounds. Stout and Jalon Walker had nine rebounds each.

The Hornets made 18 turnovers. They’ll have to take care of the ball better than that to beat Ledford.

An injury to senior Javon Smith means the Hornets will be relying on the freshmen Geter and Deuce Walker to do the bulk of the ballhandling. Deuce had six assists on Friday.

Girls are being exposed to the exciting sport of volleyball earlier in Rowan County now, but Queens University signee Kaylin “KK” Dowling may have had the youngest start in history.