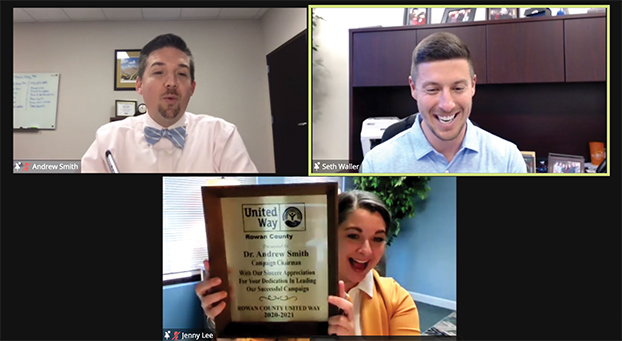 Jenny Lee and Seth Waller present Andrew Smith with a plaque for serving as the campaign chair in 2020. Ben Stansell/Salisbury Post

SALISBURY — The Rowan County United Way hosted its annual meeting virtually on Thursday afternoon to reflect on the previous year, celebrate the 2020 fundraising campaign and look forward to the upcoming year.

“Today, for me, is about celebration. For everyone it’s about celebration and I know that may seem odd to say, but 2020 was a year like no other,” said Seth Waller, outgoing president of the board of directors. “Just a year ago, no one could have predicted the impact of COVID-19, which impacted everyone in some way and has been devastating to so many. I’m proud to say that despite these challenges, it’s a time that brought out the best in our community.”

Andrew Smith, who served as campaign chair in 2020, said he was proud of what the United Way campaign team was able to accomplish despite facing difficult circumstances brought on by the pandemic. By employing new and creative fundraising tactics, the campaign ended up raising about $1.3 million that will go to the United Way’s community impact partners.

“We worked for every bit of that,” Smith said. “That didn’t come easy this year.”

Of course, nothing came easy during the pandemic. Smith said that he hoped the “innovative” strategies employed during the campaign will be used again for future fundraising endeavors.

Before the campaign even started in the fall, the United Way raised over $240,000 in the spring and summer for its COVID-19 Relief Fund.

“The message of this entire annual meeting is that of celebration and hope and we really saw a lot of people step up,” United Way Executive Director Jenny Lee said. “Our executive committee worked quickly alongside staff to develop COVID-19 relief fund.”

“We were running into the fire and not away from it because we knew the needs of Rowan County were great and that the funding that this campaign provides allows us to ensure that we have amazing support that wouldn’t be possible without the United Way,” Smith said. “Thank you to our community members.”

Awards were handed out during the virtual meeting to several people for their work on the campaign. The Jackie Award, named for longtime Rowan County United Way Associate Director Jackie Harris and given to those who demonstrated high enthusiasm for the United Way’s efforts, was shared by David Post and Edward Norvell.

“Jackie had a lot of enthusiasm and she had so much enthusiasm that it took two people to match it this year,” Smith said.

Mike Miller received the Special Friend Award and Eric Slipp was given the Helping Hand Award. Former Salisbury Deputy Chief of Police Shon Barnes received the Excellence in Leadership of Community Impact Award a few days before he will be sworn in as police chief for the city of Madison, Wisconsin.

The 2021 officers were also welcomed:

• Jim Behmer will take the torch from Smith and serve as chairman for the 2021 campaign.