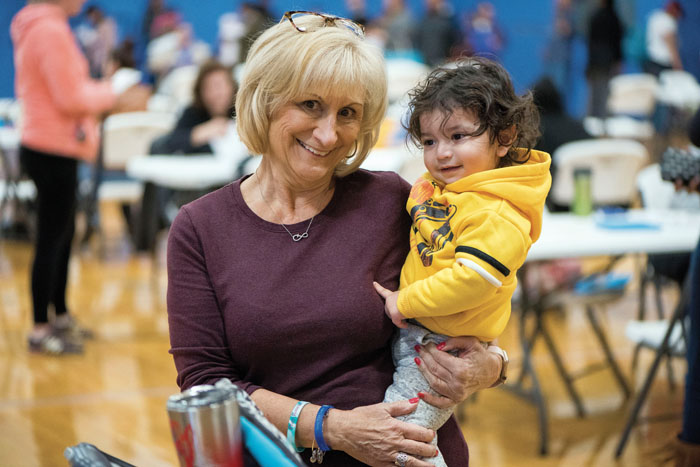 SALISBURY — After almost 30 years, the United Way campaigns sort of run together, but Jackie Harris remembers one autumn when she desperately needed $8,000 to reach the community’s goal.

And she had no clue where it would come from. Harris already was making her second and third phone calls, cajoling already generous companies for the needed amount.

Her mother, Helen, dropped by the office that morning to ask whether she had made the annual target, and Harris glumly acknowledged she was short.

Mother and daughter headed for lunch when a phone call came in from Tony Branecky, site manager at KoSa. Harris had placed a call to him that same morning.

After Harris thanked him profusely, she and her mother spontaneously started to dance in the parking lot.

“I was so happy,” Harris says. “We had worked so hard. You remember that — people who are always there for you.”

It will seem impossible to many, but the 68-year-old Harris logged her last day with the Rowan United Way Tuesday. She will be trading a full-time job and 50- and 60-hour work weeks for a 20-hour part-time position at Capstone Recovery Center.

She starts Monday as Capstone’s director of development and community outreach, a position made possible by a grant from the Blanche and Julian Robertson Family Foundation.

“It’s a mission field,” she says. “That’s directly hands-on. … Being hands-on is something I’ve never been able to do.”

Marcus Koontz, president of the Rowan County United Way Board of Directors, says Harris is “one of the largest unsung heroes in the history of Rowan County.” He has known Harris for almost 20 years and considers her a friend.

“She has worked tirelessly to enrich the lives of thousands upon thousands of Rowan County residents,” Koontz says. “There’s really no telling how many people have been touched by Jackie over the years, but I will say, without a doubt, that the legacy she has established is enormous.”

As associate director for Rowan County United Way, Harris’ energy for the campaigns, marketing and special events never seemed to waiver.  The United Way even named an annual award for her — the “Jackie Award” — which goes to an individual or group demonstrating high enthusiasm for the United Way’s efforts.

“You know the red in that thermometer they put up every year?” Nathan Harris would ask people. “That’s Jackie.”

Harris brought the United Way’s Day of Caring to Rowan County, when armies of volunteers spread out over the community to take on important one-day projects.

She teamed with Jim Duncan to create the Service Above Self Award.

John Struzick, manufacturing financial manager for Innospec Performance Chemicals and a United Way board veteran, says Harris is a force of nature and that her passion for Rowan County “and all of us who live here is truly a thing of beauty.”

“Fundraising is not an easy thing to do, no matter how worthy the cause or urgent the need,” Stuzick says, “but over the decades Jackie always maintained a positive outlook as she led the way in choosing outstanding campaign chairs, building campaign cabinets, training volunteers and being there for member agencies.”

Stuzick compared her to the Energizer Bunny.

“Whether she was on the way to Freightliner at 4 in the morning for a company campaign meeting or working with cabinet chairs into the night, she was always on the clock,” Stuzick says.

“… In my 70-plus years on this earth, I’ve never met anyone quite like Jackie. … Rowan County United Way will certainly not be the same without her.”

Harris says she had been thinking about retiring from the United Way for about a year. By mid November, her decision seemed clear.

“Finally, I just felt the Lord was telling me I had to go,” she says.

But she’s optimistic about what the future holds for United Way, which has gone to its new community-impact model directing funds to agencies and programs that focus on substance abuse, mental health and healthy behaviors.

“The new model is going to take them to a different level, and it’s something I wanted much earlier than it happened,” Harris says. “The funding is going to what’s needed. … The old model was outdated, and it took a long time to get to where we are now. It was an easy decision to make, and it was the right thing to do.”

In her position as associate director, Harris liked to be behind the scenes, though she often was the person most identified with the agency.

“Make no mistake that she has been a driving force in the accomplishments of the Rowan County United Way,” Koontz says. “Jackie deserves to be celebrated with the highest honor.”

“It’s the blue-collar worker who makes this campaign what it is,” Harris says. “United Way is a company-based campaign. People on the manufacturing floor can relate to me, and I can relate to them.”

Stuzick agrees with Harris’ own assessment.

“She is as comfortable working with the big company CEOs as she is working with every person on the shop floor in our local manufacturing plants,” Stuzick says.

Harris’ mother was a Greek immigrant who met Jackie’s  father, Hassell, during World War II. Hassell was a carpenter and foreman for Jarrell Construction. Her mother worked for local sewing companies, including Norman’s, Rowan Manufacturing and Leisure Lads.

Harris says her mother was a remarkable woman who could speak six different languages.

The Harris family lived for a time on South Caldwell Street, then moved to a house Hassell built in Milford Hills. Jackie Harris says her mother learned to drive by going from their house to the construction site of Milford Hills Baptist Church, where her daddy was site foreman.

It’s the church she attends today.

As a teen and young adult, Harris had jobs at the Kress five-and-dime store and at Salisbury’s Apple House Cafeteria, where she was hostess in the Matador Room.

Harris graduated from Boyden High School in 1969, then attended Gardner-Webb College, majoring in physical education. She especially liked to dance and still does, tripping around her house to the 45s she has on her jukebox.

Harris married and lived in Lexington for 22 years. For a time, she taught dance at the recreation center in Lexington and played softball for the First Union bank team.

Harris had two children, Jason and Laramie, but her husband left the family, never to be heard from again, when the children were 9 and 12. He never paid any child support.

“It was tough raising them by myself,” Harris says, “but I wouldn’t take anything for it. I’m so proud of them.”

After seven years of working as a district director for the American Cancer Society — a job covering seven counties, including Rowan — Harris took the United Way job in Rowan County, working with then Executive Director Bob Lippard.

At the time, Jason was enrolled at the University of North Carolina at Charlotte. Laramie was just entering high school. Today, Jason works for Sealed Air in Charlotte and has a boy and girl.

Laramie attended N.C. State, where she met her husband. Living in Apex, she also has a boy and girl. Laramie’s daughter belongs to the varsity dance team at N.C. State.

Jackie’s parents divorced after 34 years, and Helen Harris lived the last 15 years of her life with Jackie.

“When she died, a big piece of me died, too,” Jackie says.

When Harris interviewed for the United Way job here, Carl Repsher was that year’s campaign chairman, and Dyke Messinger was president of the board. “They were so good to me,” Harris says.

Harris tells the story of another campaign, which she believes was saved by her longtime friend David Treme, the former Salisbury city manager.

“He’s kind of mentor to me and a prayer partner,” Harris says.

She remembers being at the fourth report meeting at Cloninger Ford that particular year, and the news was dire. The pledges were nowhere close to where they should have been.

Treme simply asked everybody to take a minute and pray.

“And we met goal,” Harris says, recalling how the whole campaign turned around from that point. “That was another amazing moment for me.”

Harris describes herself as a homebody. She loves hanging out with her rescue dog, Callie, and she stays busy outside of work by serving on several church committees, singing in the church choir and belonging to the Project SAFE Neighborhood board and the police chief’s advisory board.

She is a loyal member of  the Rowan Rotary Club.

“I plan on staying very connected,” she says.

United Way Executive Director Jenny Lee and the board of directors have talked to Harris about a retirement party, but she balks.

“United Way is not about me,” she says. “It’s about the volunteers, the community and the clients.”