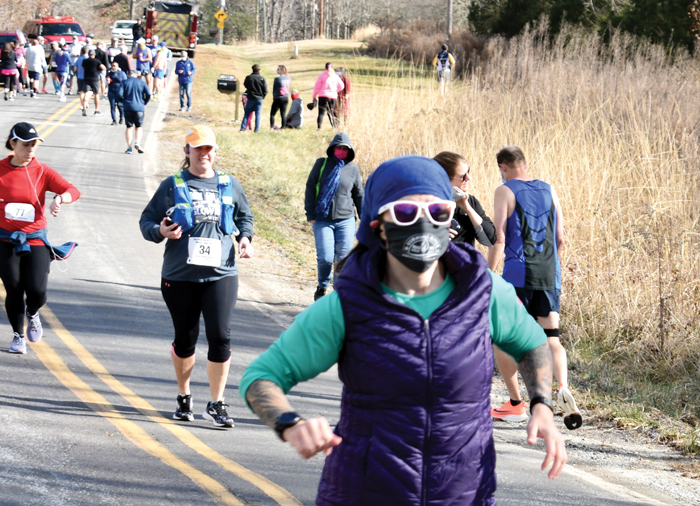 A different location still brought out a crowd of 292 participants for Rowan’s best known race. The dairy cows lined up to watch the runners as many of them made rare visits to the rural countryside. Here are some of my own special memories from last week’s 38th annual event.

A total of 55 volunteers worked the event while participants came from five states.

Hope Julian, 11, from China Grove, won the women’s 5K with a sizzling 22 minutes and 5 seconds.

Molly Nunn, from Clemmons, has won the women’s 8K multiple times and did again at 30:17, the same time as last year. She won $125, a portion of which she donated back to the race and plans to use the rest to help purchase a new pair of shoes for her training partner from Winston-Salem. 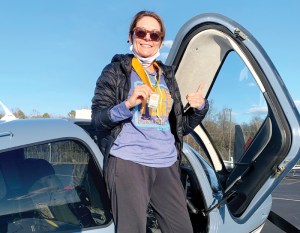 Matthew Martin, another China Grove finisher, beat his brother Jonathan by 5 seconds to win the 8K in 24:55. Those finishes were special enough but both Martins got a memorable treat. Matthew said, “Our grandma is Anna Martin and her memory has gotten pretty bad plus she physically can’t get around very well. But she is pretty healthy. Our dad brought her with the intention of getting as close to the finish line as possible so that she could see us finish the race. The plan was also to leave her in the car while keeping her away from folks due to COVID. It worked out perfectly that she got to see us finish from the comforts of my dad’s car. We are extremely thankful for the firemen/volunteers that they were able to clear a spot for her to spectate. We’re glad she got to come because it’s been a while since she has seen us race. We always enjoy Winter Flight and we’ll be back next year!”

Mrs. Martin and her son arrived a little late to the race after the road was blocked by the firefighters because the runners would finish a short distance away. Those Locke firefighters found out about Mrs. Martin just as someone moved their car from a spot at the finish line. They made a way to get her car to that perfect spot just as her grandsons finished in front of her while winning the race. West Rowan Fire Department also worked the event.

As the area’s best runners, the Martin brothers are training hard to beat the course record at the Myrtle Beach Marathon on March 6.

Lisa Deaton and her friend Michael Liebowitz of Charleston, S.C., fly to a race on as many weekends as possible. Last Sunday, they landed at the Mid Carolina Regional Airport and took a loaner car to the race site on Sloan Road. We talked on Tuesday morning as Lisa shared her report on the race and much more.

Lisa knows her stuff because she directs the Race the Landing 5K in Charleston and has for eight years. Lisa also is an excellent runner, winning her 5K age group Sunday in 23:05 at age 56. But as one serious runner and race director to another, I was focused on her words as she described her first Winter Flight experience. Both Lisa and Michael are pilots and Michael owns the plane, a Cirrus SR22 that’s special because the plane has its own parachute. Lisa said, “We love coming to N.C. better than any other state. I have family in Statesville and our favorites are the Outer Banks and this area. I’m a flatlander so the hills were tough but well worth the great course. Where did you get all those smiling, gracious and kind volunteers? And the race was COVID perfect! We just liked everything about the appealing race including the cows and the little colored dots on the race bib signifying our wave start.”

It takes a while to put this event to bed for another year, just as it takes months of planning to have it. Rowan Helping Ministries will receive a check for more than $10,000 and the runners, walkers and volunteers went home with a great experience.

The next race is the always well-organized event at Centenary Methodist Church’s Will Run for Food 5K on Feb. 27. Look for it and other upcoming events at www.salisburyrowanrunners.org .