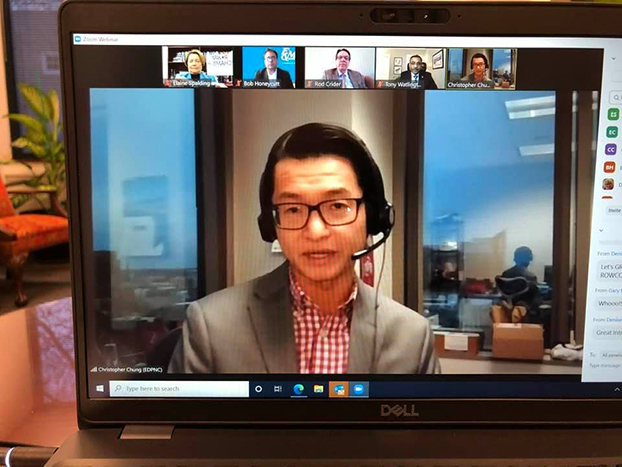 Photo courtesy of the Rowan County Chamber of Commerce.

SALISBURY — When the reality of the pandemic set in about 10 months ago, Chris Chung was worried about what it would mean for the future of North Carolina’s economic development.

It was Chung’s job to worry, since he’s the CEO of the Economic Development Partnership of North Carolina. The Raleigh-based organization is dedicated to expanding existing companies, recruiting new ones and supporting the state’s small businesses and tourism industry.

At first, the pandemic brought everything to a halt. But as the year wore on, development started moving again. While the pandemic has carried over into 2021, Chung is optimistic for the future.

Chung expressed his positive outlook on North Carolina’s economic development in the new year during his presentation at the Rowan County Chamber of Commerce’s virtual Power in Partnership program on Thursday morning.

“Obviously the pandemic was the defining economic feature of the year, let alone all of the public health ramifications, but in spite of the pandemic it actually did not affect as much of our work as we thought if you’d asked us in March of last year,” Chung said.

At the beginning of each year, the EDPNC sets goals for economic development. After COVID-19 spread to the United States, Chung was concerned the organization wouldn’t be able to hit its targets for capital investments and new jobs announced. Fortunately, his concerns didn’t come to fruition.

“Fast forward to the end of the year, but we actually had a far better year on this front than we would have ever anticipated,” Chung said.

In total, the EDPNC helped facilitate 147 combined business recruitment and expansion wins in 2020. Several of those were in Rowan County, including the announcement that Eastern Wholesale Fence will be locating its new facility in the Mid-South Industrial Park at 7401 Statesville Blvd.

Through those 147 recruitment and expansion wins, over 20,000 new jobs were announced.

“It’s always nice to break that barrier and get into the 20,000 range,” Chung said. “That’s two years in a row now that announced job creation in the state through these recruitment and expansion wins exceeded the 20,000 mark. Believe me, that was far from known or even possible in our minds at the beginning of the pandemic.”

While economic activity was lower in the first part of 2020, Chung said that it was a “tale of two halves,” and that activity actually increased in the last six months of the year.

“June through December, I think with the exception of one month, we were anywhere from 10 to 40% greater in terms of the number of new projects coming in through the door in those months compared to the same months in a very active year of 2019,” Chung said.

Manufacturing and distribution companies continued to prosper,  but other sectors such as tourism and transportation suffered with people traveling less both for work and leisure. As a result, Chung said, many people who were previously employed in the hospitality industry have been permanently displaced from their jobs.

Despite those setbacks, Chung said that North Carolina is positioned well for when the pandemic abates and companies begin to focus on expansion again. The EDPNC plans to lobby state legislatures to bolster the state’s budget for business marketing to capitalize on that opportunity, Chung said.

“We’ve started some conversations with the legislature about the need and the opportunity to really go big on a budget that allows up to market North Carolina as a great business location, because we know companies are sorting out where they’re going to want to be when this pandemic is over,” Chung said. “I think many of us believe North Carolina is going to be a really strong option.”

Chung said that the EDPNC is currently working on 157 economic development projects. One of those could make a major impact in Rowan County.

Known as “Project Popcorn,” the EDPNC is working with the Rowan Economic Development Commission to land a company that would bring 1,200 jobs and $125.7 million in investment to the county.

A public hearing will be held during the Rowan County Board of Commissioners meeting on Feb. 1 regarding an incentive package that the county is considering offering the prospective company behind “Project Popcorn.”