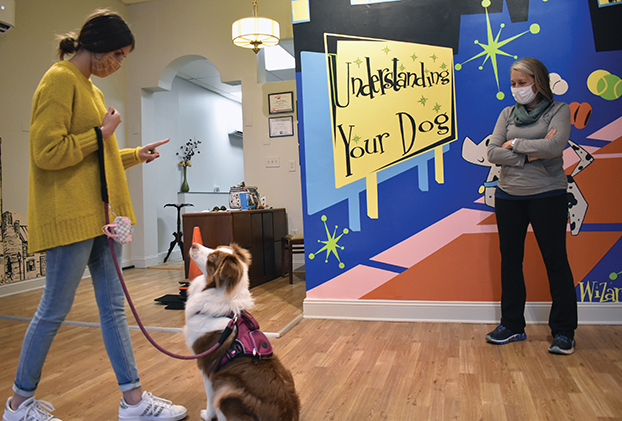 Pitner, clearly in her element, offered helpful pointers and interjected with advice as Morgan occasionally paused, lifted her index finger and instructed her dog, named Nola, to sit. Nola, showing off the skills she’d learned during the session, was happy to comply — most of the time.

Morgan and Nola are Pitner’s newest clients, but they’re certainly not the first ones to visit the Understanding Your Dog training center for a session with Pitner, who has been training dogs professionally since 2017. After years of conducting classes in homes, at various dog parks and around downtown Salisbury, Pitner opened the training center at 110 E. Council St. in November.

“This is just exciting,” Pitner said. “In downtown Salisbury, I think this is something that’s needed here.”

Pitner discovered her passion and aptitude for training dogs about 15 years ago while volunteering at Faithful Friends Animal Sanctuary.

As a volunteer with the nonprofit rescue organization, Pitner familiarized herself with different breeds and learned their various energy levels and behavioral tendencies. That knowledge proved valuable when she earned her professional dog training certificate through the online Animal Behavioral College in 2016.

“I would say 97% of dog training is really training the people,” Pitner said. “The dogs really understand what I’m trying to get them to do and so I would say a high percentage is training the person. You have to be a people person to train dogs.”

Pitner started by offering one-on-one training sessions at clients’ homes to make it more convenient for them. She built a customer base that was composed of clients near Salisbury, but also as far away as Charlotte, Lexington and Mooresville.

While Pitner does have a curriculum that she teaches, the training program is flexible and she can focus on any specific problems that a dog owner may be having. Pitner said that she tries to make herself available to her clients outside of sessions as well. It’s not uncommon, Pitner said, for her to field calls and questions after business hours. 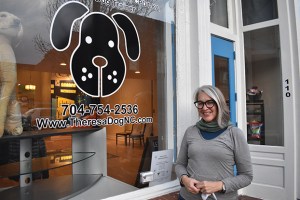 After only training in her spare time for a couple years, Pitner went all in and officially launched Understanding Your Dog, LLC in 2019.

Despite having a far reaching customer base, Pitner always dreamed of opening up a physical location in downtown Salisbury.

Since opening the training center on East Council Street, Pitner said that she’s added to her clientele. That’s both a product of foot traffic, she said, and the result of an influx of clients who received puppies as Christmas presents, as well as owners who brought dogs into their homes during quarantine. Nola, who Morgan got as a graduation present for herself in April, fits into the latter category.

Nola doesn’t have any major behavioral issues, Morgan said, but she would like the puppy to be more disciplined and wants Pitner to help her work on Nola’s separation anxiety.

Pitner said that separation anxiety is a prevalent issue among many of her clients right now, since owners have been spending more time with their dogs as they’ve worked from home during the pandemic.

“A lot of folks have their dogs sitting on their lap the whole time,” Pitner said. “For the first three months, that’s how it is and then they have to go to work. They call me because they say the dog tore the house up.”

Although Pitner paused in-person training in the spring, the pandemic didn’t slow her down.

“During that time, I did online classes,” Pitner said. “We did Zoom meetings. The way I train, I don’t do hands on. I give the reins to the human and they train. I coach how to train the dogs. When we did Zoom meetings, it was kind of the same thing.”

While some clients still prefer online classes, many have flocked to the downtown training center for hands-on sessions. To help with her growing clientele, Pitner brought on Tracy Crotts, who focuses on teaching dogs agility lessons as opposed to discipline, which is Pitner’s specialty. 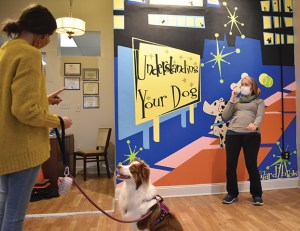 Instead of interacting directly with the dog, Pitner focuses on providing guidance and pointers to the dog’s owner. Ben Stansell/Salisbury Post

The training center is Pitner’s most recent addition to the canine community in Salisbury, but it isn’t her first. Pitner was a driving force in the effort to open what is now known as Pitner Park, one of the few dog parks in Rowan County that is located behind the Salisbury Civic Center.

Opening the training center downtown was only “phase one” of Pitner’s master plan for Understanding Your Dog. For her next act, she wants to open a doggy day care and teaching school with ample room for taking care of and training dogs. After that, her goal is to own an even bigger facility that can be used for agility training and for dog competitions.

Right now, though, Pitner is still settling into her new digs and is focused on improving canine behavior, one dog at a time.

“This is a good start for me,” Pitner said. “Just being here, staying small, renting it and doing lessons.”

Fore more information about Understanding Your Dog, visit its Facebook page or call 704-754-2536.

Aid for the Arts: Local venues, cultural organizations could…