‘More complete than it’s ever been’: Dog park renamed for Theresa Pitner 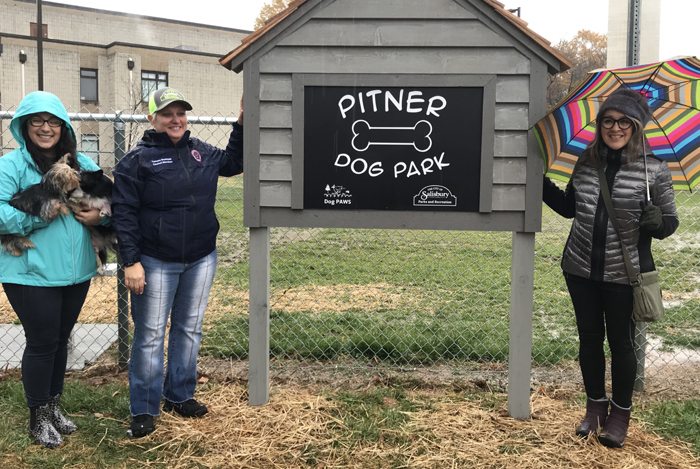 SALISBURY — Pitner Dog Park, named in honor of Theresa Pitner, was unveiled Saturday during a ceremony that persisted through heavy rain.

Pitner is a dog park champion and owner of the training service Understanding Your Dog. She offers personalized training with families and individuals to help dog owners understand their pets. As training begins, she has owners provide a brief history of any problems they may be having with their dogs and sets clear expectations. The business owner teaches manners, including keeping four feet on the ground, disciplining them if they bite, and teaching them specific commands.

In expressing her thoughts about the unveiling, Pitner was focused on the work still to come.

“The biggest thing is this is now to me more complete than it’s ever been,” Pitner said. “This is not it. We’re still working, This just shows you what we’ve done and what it can be and what it’s going to soon become.”

While the event was originally set to host live music, food, games and vendors, the heavy rain forced a reconfiguration. And it persisted solely as a renaming ceremony with a few remarks from city officials. Event coordinator and volunteer Director Alyssa Sides said that the celebratory side of Saturday’s originally planned event has been postponed for “Woofstock” in June.

“We will do this again in June and we will have a big party. It will be the biggest party ever at the dog park,” said City Council Member Tamara Sheffield.

Nick Aceves, director of Parks and Recreation for the city of Salisbury, provided opening remarks and said that it was a great day in spite of the weather.

Sheffield said that Pitner “helps so much not just in our community and not just with dogs.”

“She helps people love pets and love people. Theresa, the work that you do is far beyond us,” Sheffield said.

Previously, the park had only been an enclosed area of grass.

Stephen Brown, landscape architect and project manager for the City of Salisbury, said the park is approximately one acre and is equipped with handicap accessible entries and water fountains as well as drinking fountains for pets. That’s in addition to benches and new trees.

“We would like to one day have a total of 12 to 13 trees out here, and eventually we will have eight to 10 benches,” Brown said. “I’ve enjoyed the design portion of this project, and have enjoyed interacting with different people.”

Brown said the total cost of the park’s improvements project was roughly $25,000.

Pitner said she believes that the dog park provides new opportunities for the community.

“What I love is bringing people here who don’t come here, who might not have known where the Civic Center was, who don’t come on this side of town,” Pitner said. “I want people to get out of their backyard, bring their dog out, socialize with other people and have everyone altogether. When you have a dog, that right there is a common ground with lots of other people.”

The unveiling of the renovated park is “just icing on the cake,” Aceves said.

“Theresa has been the champion and the driving force behind this,” Aceves said.