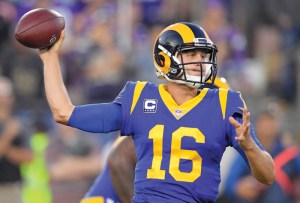 SEATTLE (AP) — Whether it was John Wolford’s inexperience or Jared Goff’s battered thumb under center, the Seattle Seahawks should have had the advantage.

No way the champs of the NFC West would lose at home to a quarterback making his second career start, or the guy less than two weeks removed from thumb surgery. Right?

“I think about two weeks ago, I was sitting right here in this chair, knowing I have a broken thumb and lying to you guys,” Goff said. “And coming back here and winning this game in a big way is meaningful.”

While it was a combination of running and defense that proved the difference, Goff played a major role in the Rams’ 30-20 win over the Seahawks on Saturday.

Goff’s numbers weren’t special, but they probably shouldn’t have. It was two weeks ago he suffered a thumb injury in the Week 16 loss to the Seahawks that required surgery.

It wasn’t even supposed to be Goff’s day to shine.

That opportunity was set for Wolford, who led the Rams to a Week 17 win to clinch a playoff spot and seemed just fine in the first quarter against Seattle. But the plan changed when Wolford was injured on a 2-yard run with 5:19 left in the first quarter. Wolford went head first and into the right shoulder of Jamal Adams. Wolford left the field on his own, but eventually went to a local hospital as a precaution.

Suddenly, Goff was thrust into a much larger role. He finished 9 of 19 for 155 yards and a late 15-yard TD pass to Robert Woods. Most importantly, Goff didn’t turn over the ball after throwing a costly interception in the Week 16 loss.

“My thumb is fine. It’s coming along. It’s not 100% because it had surgery 12 days ago, but it’s in a good place,” Goff said. “I’m very capable with what I’ve got going on right now. I’m very proud of our team. It’s an exciting game. It’s an exciting day.”

What made the day so successful for Goff was Seattle’s defense getting exposed in a way it rarely had. Seattle was best in the league at limiting points the second-half of the season. But the one constant, even early in the season when the Seahawks were struggling defensively, was the ability to stop the run.

That was absent against the Rams. Cam Akers rushed for 131 yards and had lanes of space to run through, often breaking tackles to get to the second level. And because Seattle couldn’t slow down Akers or Malcolm Brown, it never forced Goff to have to make exceptional throws even though he was limited.

The Rams rushed for 164 yards, third most allowed this season by Seattle.

“They’ve played us enough and they found out where they wanted to go and we just didn’t stop it,” Seattle coach Pete Carroll said. “There was a lot of similar plays that they ran and we were doing our things to try and get them stopped, and they just were able to keep pecking away.”

Goff did have a couple of big plays, both of which will probably gnaw at the Seahawks all offseason. Goff hit Cooper Kupp on a 44-yard pass in the second quarter that Jamal Adams appeared in position to knock away or possibly intercept. The reception led to a 39-yard field goal from Matt Gay.

On the Rams’ next drive, Goff was flushed from the pocket on third-and-9 but found Akers open for a 44-yard catch-and-run up the sideline. Akers eventually capped the drive with a 5-yard run and a 20-10 halftime lead.

“They did a phenomenal job. They controlled the clock and they flipped the field on us a lot of times,” Jamal Adams said. “They made more plays than we did. I mean it’s tough to win ballgames when we’re not hitting on all cylinders, all three phases.”