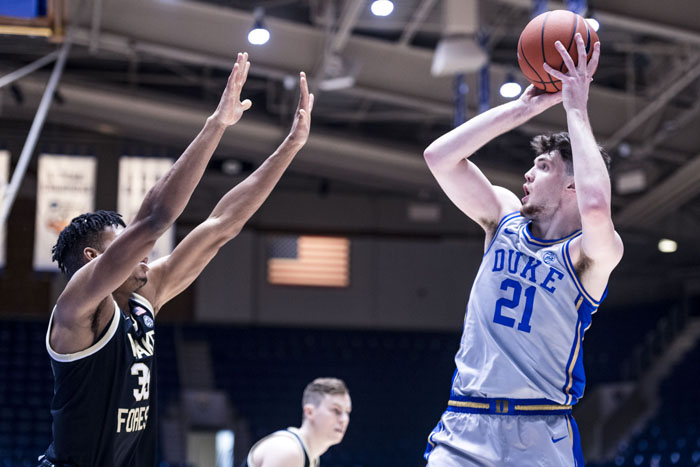 Duke’s Matthew Hurt (21) goes up for two of his career-high 26 points in front of a Wake Forest defender on Saturday. Photo courtesy of ACC

DURHAM (AP) — Matthew Hurt scored a career-high 26 points to help No. 21 Duke beat Wake Forest 79-68 on Saturday in Hall of Fame coach Mike Krzyzewski’s return from a one-game absence due to COVID-19 protocols.

Freshman DJ Steward added 21 points for the Blue Devils (5-2, 3-0 Atlantic Coast Conference), who shot 51% and controlled the boards to extend their home-court dominance in the long-running in-state series. 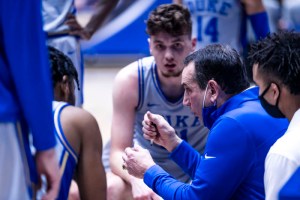 Duke coach Mike Krzyzewski was back with the team after a one-game absence due to COVID-19 protocols. Photo courtesy of ACC

Krzyzewski missed Wednesday’s one-point win against Boston College. He had said previously that he and his wife were following quarantine protocols after a family member had tested positive for COVID-19, though Krzyzewski said both of them had tested negative.

He said he was tested again early Saturday before being cleared. He said a daughter and granddaughter are fighting the virus and “doing OK but not great.”

“I’m just happy that we have such a good medical center and medical people who will take care of us,” Krzyzewski said. “I’m happy to be back. I thought my team played really well today.”

Duke finished with a 35-25 rebounding advantage but did its best work by grabbing 11 offensive rebounds after halftime that led to 13 second-chance points.

Daivien Williamson and Ismael Massoud each scored 17 points to lead the Demon Deacons (3-3, 0-3), who had just one field goal during a seven-minute stretch midway through the second half as Duke stretched its lead.

“It’s demoralizing to your defense when your first-shot defense, you make them miss and then you don’t get the rebound,” Wake Forest coach Steve Forbes said. “And credit to Duke, they were aggressive on the glass in the second half, especially their guards.”

The Demon Deacons haven’t won in Cameron Indoor Stadium since January 1997, during eventual NBA star Tim Duncan’s final college season. They shot well enough for stretches of this one, though they went just 2 for 10 behind the 3-point arc after halftime and committed 15 turnovers (seven from midyear enrollee Carter Whitt). The struggles to keep Duke off the glass for extra looks also was a key factor as the Blue Devils took over in a game tied at 55 with 11:45 left.

Hurt led the way for Duke by making 10 of 15 shots with four 3-pointers, including a big one with about 3 1/2 minutes left that gave him a new career-high output.

Wake Forest will host Louisville on Wednesday night for its first home ACC game this year.