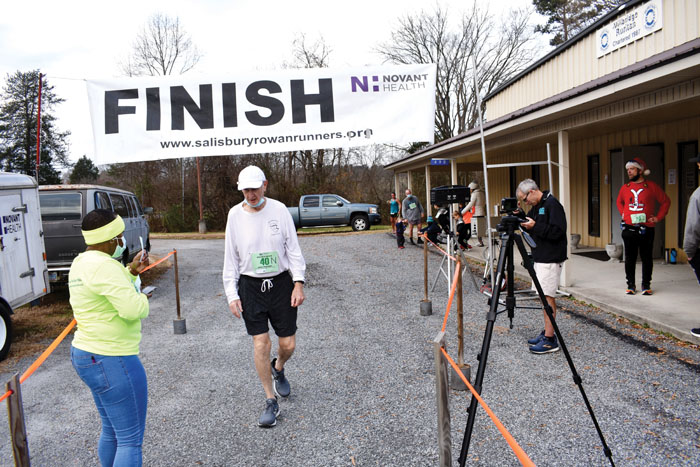 I listened to Jerry Kanipe talking one morning, just before the Ed Dupree 5K was about to start. He told Luann Fesperman why he needed to run and I thought his answers seemed much like mine, and probably similar to a lot of other long time runners. Jerry is 74 and a fixture around local racing. I wanted to know more about his history and got some great information this week.

Jerry said, “I started running in the ’70s. I was a smoker back then and decided to quit and become more fit. I found out that when I ran, I got the same relaxed feeling that smoking had given me, so I chose to continue running.” He has had periods of injuries and illnesses when he couldn’t run, including hernia surgery a few years back and a recent kidney stone episode. Plantar fasciitis kept him from running for two years, and about the time that was under control, Jerry was diagnosed with A-Fib, which various medications did not help. Two heart procedures, both in 2018, have kept it under control.

After that long absence from running, Jerry found that he had to start over from scratch. He said, “I was overweight and short of breath. Running got me back on the right track. I still have aches and pains now and then at my age and have to take short breaks, but try to run as often as I can. I have discovered during these interruptions that running is just as important for my mental health as my physical health. When I don’t get to run, I can get “down in the dumps” and antsy. My wife calls it irritable!”

Jerry says that one of the most enjoyable parts of running is going to the races. He continued, “Not because I like to compete, but for other reasons.  First, the races are a fundraiser for a good cause and I enjoy being around a group of like-minded people. No one has to explain why they are there and why they are running — everyone has their own reasons why they like to run. I especially like to watch the faces of the kids in the fun runs.”

While his only goals in running these days are to stay injury free and just to keep going, Jerry looks deeper for why running works for him. He said, “I am not a fast runner, but I feel very blessed and grateful to be able to put on my running shoes and spend time out in nature. When the weather doesn’t cooperate, I head to the East Rowan Y to the indoor running track. I have a grandson who is active in high school sports and he occasionally runs with me, which is a joy in itself.”

And finally, maybe the best reason of all, Jerry said, “I also receive a lot of encouragement and support from my wife Linda, who likes me better when I’m able to run!”

A lot has happened recently with upcoming races. The Resolution 5K is now set for Salisbury Community Park at 9 a.m. on Friday, Jan. 1. The race benefits Rowan Helping Ministries, but it is also a great low-cost way to challenge yourself declare that 2021 will be better new year. Entry is just $10 or $5 and 3 canned goods. With that, all runners and walkers will get an accurate course, a recorded time and results posted online. There will be plenty of refreshments and everybody gets a left over, but still new, race T-shirt. Come challenge yourself, then go home with a jump start on the year.

The 2021 New Sarum Brewing 38th Annual Winter Flight 8K/5K and Fun Run is going to happen, but at press time, it looks like one of the Southeast’s best known races is headed for Millbridge Ruritans/Sloan Park area. Meredith Abramson’s fabulous hoodie already has people excited and we hope for another fantastic year for the oldest and largest race in the area, also benefiting Rowan Helping Ministries. Find for more information at salisburyrowanrunners.org .