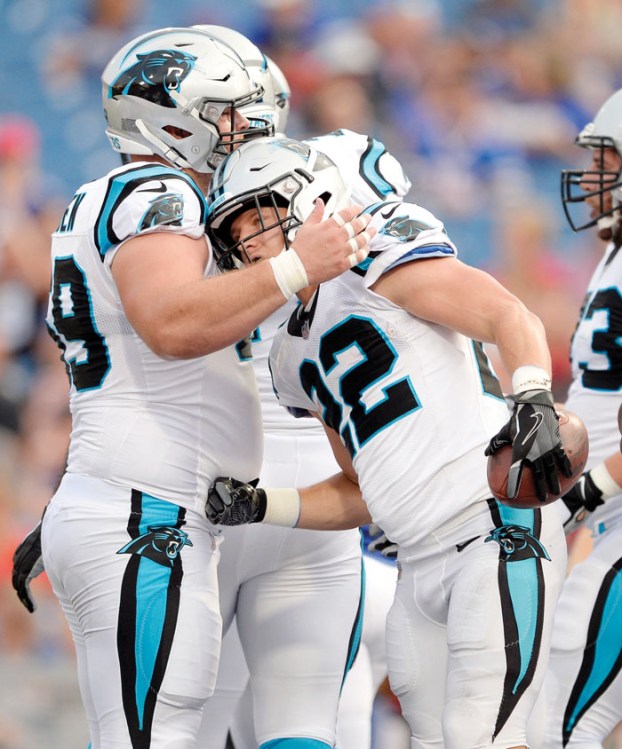 The Panthers haven't had much to celebrate lately and running back Christian McCaffrey (22) likely won't be on the field Sunday against the Broncos. (AP file Photo/Adrian Kraus)

CHARLOTTE — The Denver Broncos and Carolina Panthers looked like NFL powerhouses with bright long-term organizational futures when they met in Super Bowl 50.

But both franchises have fallen on hard times since that Feb. 7, 2016, game, and have never come close to reaching that pinnacle since. Both playoff-starved teams sit at 4-8 entering Sunday’s game and find themselves essentially playing out the string this season.

The Broncos have had two coaches since Gary Kubiak hoisted the Vince Lombardi Trophy and have not made it back to the postseason since Von Miller helped the Broncos shut down Cam Newton and a high-powered Panthers offense in a 24-10 victory in Santa Clara, California.

Panthers center Matt Paradis, who played for the Broncos that season, said it’s amazing how the fortunes of both teams have changed.

“Football is a hard sport,” Paradis said. “It’s hard to win. It’s hard to be the best. It’s hard to sustain it. You look at what New England has done over the past couple of decades, that’s very
rare. Obviously neither team envisioned this.”

Denver is 31-45 since winning its third championship.

Carolina isn’t much better, going 33-43 during that span, getting back to the playoffs in 2017 only to lose in the wild-card round.

The Panthers could be without Christian McCaffrey and several others key players after placing eight on the reserve/COVID-19 list earlier this week, including wide receivers D.J. Moore and Curtis Samuel, linebacker Shaq Thompson and defensive tackle Derrick Brown. None of those players practiced Wednesday or Thursday.

“It’s been a little boring without my boys out there at practice,” Panthers wide receiver Robby Anderson said.

The Broncos are without their top three cornerbacks with A.J. Bouye serving a six-game PED suspension, Bryce Callahan (foot) on IR for another two weeks and rising rookie Essang Bassey (knee) out for the year. The Broncos will turn to De’Vante Bausby and rookie Michael Ojemudia with Kevin Tolliver Jr., Duke Dawson Jr. and newly reacquired safety Will Parks the options in sub-packages.

First-round draft pick Jerry Jeudy tweeted, “At least I got my conditioning in” with a shrugging emoji following his one-catch performance in the Broncos’ 22-16 loss at Kansas City last weekend. Jeudy played 49 snaps, but was targeted just one time before Denver’s desperation drive in the final minute, when Drew Lock overthrew him, hit him for a 5-yard gain and then threw an interception while trying to force it to Jeudy over the middle.

“I think he’d just like to have more catches and I don’t know of any receiver that doesn’t feel that way,” Broncos coach Vic Fangio said.

Rhule expressed concern over defending the Broncos’ running game, which is led by Melvin Gordon and Phillip Lindsay. He said watching the Broncos put up 189 yards rushing against the Dolphins in Week 11 was “sobering in terms of what they can do.”

“They run outside zone, they run one-back power, they run inside zone and they run counter so you have to defend several different run schemes,” Rhule said. “And because Lock is such a good athlete, they have a zone read series, run-tag RPO series, so they have a lot of offense that you have to prepare for.”