College basketball: Duke gets down early vs. Illinois 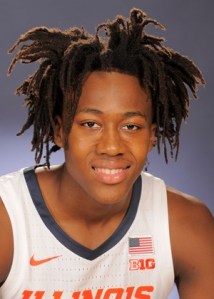 DURHAM, N.C. (AP) — Ayo Dosunmu scored 18 points and sixth-ranked Illinois shot 58% to beat No. 10 Duke 83-68 on Tuesday night in the ACC/Big Ten Challenge.
Kofi Cockburn added 13 points for the Fighting Illini (4-1), who jumped to a 14-2 lead and never looked back. The Fighting Illini led by 14 at halftime and didn’t let the margin slip below double figures after the break, handing the Blue Devils their second nonconference home loss in a week while playing without their famously hostile Cameron Indoor Stadium crowd amid the coronavirus pandemic.
Illinois led by 19 points early in the second half, aided by an outside shooting effort that had the Illini make 7 of 11 3-pointers — including 6 of 8 in the first half as they took control.
Matthew Hurt scored 19 points to lead the Blue Devils (2-2), who shot 40% and made 5 of 22 3-pointers.
BIG PICTURE
Illinois: The Fighting Illini were coming off last week’s loss to No. 2 Baylor in the Jimmy V Classic in Indianapolis. Illinois entered this game having lost 11 of 13 road matchups against top-10 opponents, with both wins coming in 1989 from the “Flyin’ Illini” team that reached the Final Four. But they had little trouble adding another in this one, with freshman Adam Miller hitting three 3s by midway through the first half to help Illinois take over quickly on the way to having six players score in double figures.
Duke: Both of the Blue Devils’ home nonconference losses this year have come against a highly ranked Big Ten opponent, the first coming Dec. 1 against fourth-ranked Michigan State in the Champions Classic. The Blue Devils struggled to generate consistent offense Tuesday and missed their first 12 3-pointers on the way to falling to 19-3 all time in the ACC/Big Ten Challenge.
UP NEXT
Illinois: The Fighting Illini visit Missouri on Saturday night.
Duke: The Blue Devils host Charleston Southern on Saturday.