West Rowan defensive lineman Zeek Biggers will sign with Georgia Tech on  Dec. 16 at 2 p.m. at The Reach Church in Salisbury.

Biggers can’t do the usual West signing in the school media center, so the Falcons are being creative, said head coach Louis Kraft.

Ana Tedder had six kills for the Green Dragons, and Kerryn Terry had 10 digs.

Ella Trainor had four kills for the Hornets, with Alli Tuck getting three and Brooke Cunningham two.

Ellen Yang had nine assists and 11 digs. Trainor had nine digs. Madelyn Lawrence had seven digs, while Riley Peltz had five and Grace Blackwell had three.

The CCC tournament will begin on Jan. 4 with the better seeded teams hosting the first round.  Oak Grove will host the semifinals and championship.

West Rowan improved to 4-2 by beating East Rowan for the second time on Tuesday.

• In a loss to South Iredell on Friday, Kary Hales had 35 digs for Carson. Jaden Vaughn had 22 kills and Tate Barger had 36 assists.

Gabe Blackwelder led the Wonders in 18:00. 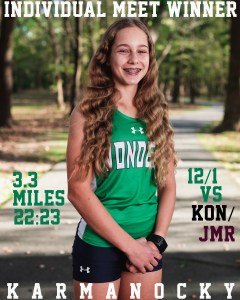 Friday’s Charlotte 49ers football game at Marshall has been canceled due to medical concerns within the Marshall program.

This cancellation will complete the 49ers’ 2020 football season.

Catawba’s men’s home game with Tusculum on Wednesday was postponed.

The schedule is expected to be constantly undated and adjusted this season.

Catawba now has a game scheduled at Lenoir-Rhyne on Saturday afternoon at 2 p.m.

On Wednesday, Dec. 16, Catawba’s men host Lincoln Memorial at 1 p.m., while the Catawba women will host Newberry at 4 p.m.

Catawba is at Mars Hill for a doubleheader on Dec. 19.

Weant and Teter tied for low gross score with 75s.

Weant won closest to the pin on No. 2, while Hammill made the longest putt on No. 9.

•  Erwin took a 9-0 win over West Rowan Middle at Erwin  on Wednesday.