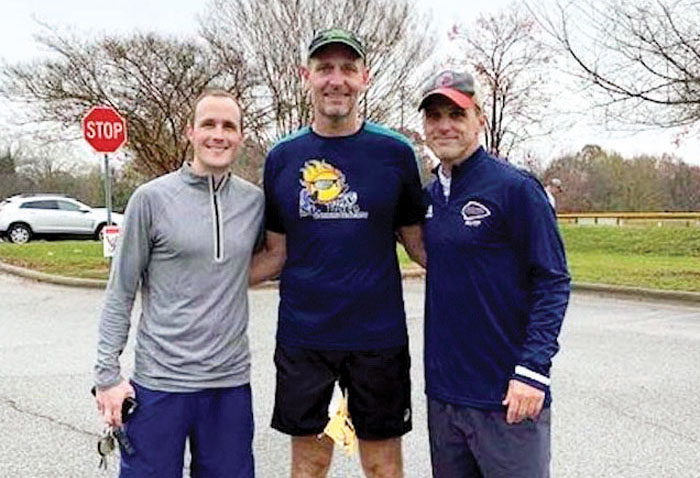 Bob Marchinko had just finished a run and saw a big tree limb on his roof. He said, “I grabbed my ladder and went up for it. My best guess, with no memory at all, is when I went to step down on the ladder from the roof, the ladder kicked out from under me and I hit my head on the roof before landing on the ground. No one knew I had been on the roof, but a neighbor who was out walking saw me lying on the ground knocked out cold and called 911.”

At Novant Health in Salisbury, Bob was found to have some bleeding on the brain, a leg gash that needed staples and multiple neck fractures. He needed emergency surgery and was sent to Presbyterian Hospital in Charlotte. Possible paralysis was still a concern as Bob met Dr. Segebarth, an Ortho Carolina surgeon. Bob said, “I knew I could recover and come back to lead a normal life. My mission then became to get out of the hospital as fast I could.”

Bob couldn’t run or really lift anything for the first two months. Only walking was permitted while his body healed and the neck fusions set. Two metal rods, a metal plate and 14 metal screws had been inserted. Bob said, “I tried to behave on the lifting part, but we had just moved into a new house and there was landscaping to do. I had to learn the hard way on what my body could handle. Sometimes I would overdo it and then be wiped out for a few days, but that probably helped my recovery process. My doctor let me start running again in August with some pushing from me. Running was very painful for six weeks and there was no runner’s high. I still thanked the Lord every day on how blessed I was to be able to move, even if it was slow and painful.”

Once the most dominant male racer in the area, Bob had not raced much in 10 years and after the injury thought he may not race again. He said, “I’m getting a little better each week, the neck still isn’t 100%. It can get pretty sore and stiff if I overdo it or if it is damp out. I kept trying to get back in shape, and feel like a runner again. By late September, running started getting a little easier for me and I started to surprise myself on some of my runs. My running buddy, Robert Miller, started needling me to jump into the Butterball 5K, which I did and felt pretty good about it.” Bob had a sizzling 17:03 on a challenging and wet course.

After running the Butterball 5K, Bob wants to run another 5K to break 17 minutes. He’s also considering a half marathon in either December or January, then maybe a marathon in the spring. Bob said, “I turn 50 this summer and am getting an itch to run the Boston Marathon again. But I am just as happy to be able to head out for a hard run in my neighborhood and keep coaching my athletes at Catawba. We are starting to build something special there.”

Bob concluded, “God has looking out for me and has helped me to recover so quickly. I also need to thank my wife, Wendy, and son, Zach, who both helped my recovery, especially that first week when things were tough with so much help needed. Running friends Robert Miller and Brett Howell have meant the world to me. Thanks to my colleagues at Bostian and Mt. Ulla elementary schools, and my Catawba College family, where I help coach cross country and track. Jason Bryan and my athletes have been a blessing to me.”

Saturday, Dec. 12, is the Santa Run/Walk 5K at the Millbridge Ruritan Building on Sloan Road. Santa, Bigfoot, a beautiful course, and plenty of fun in a rural setting. Come join us. More info at www.salisburyrowarrunners.org and www.runsignup.com .